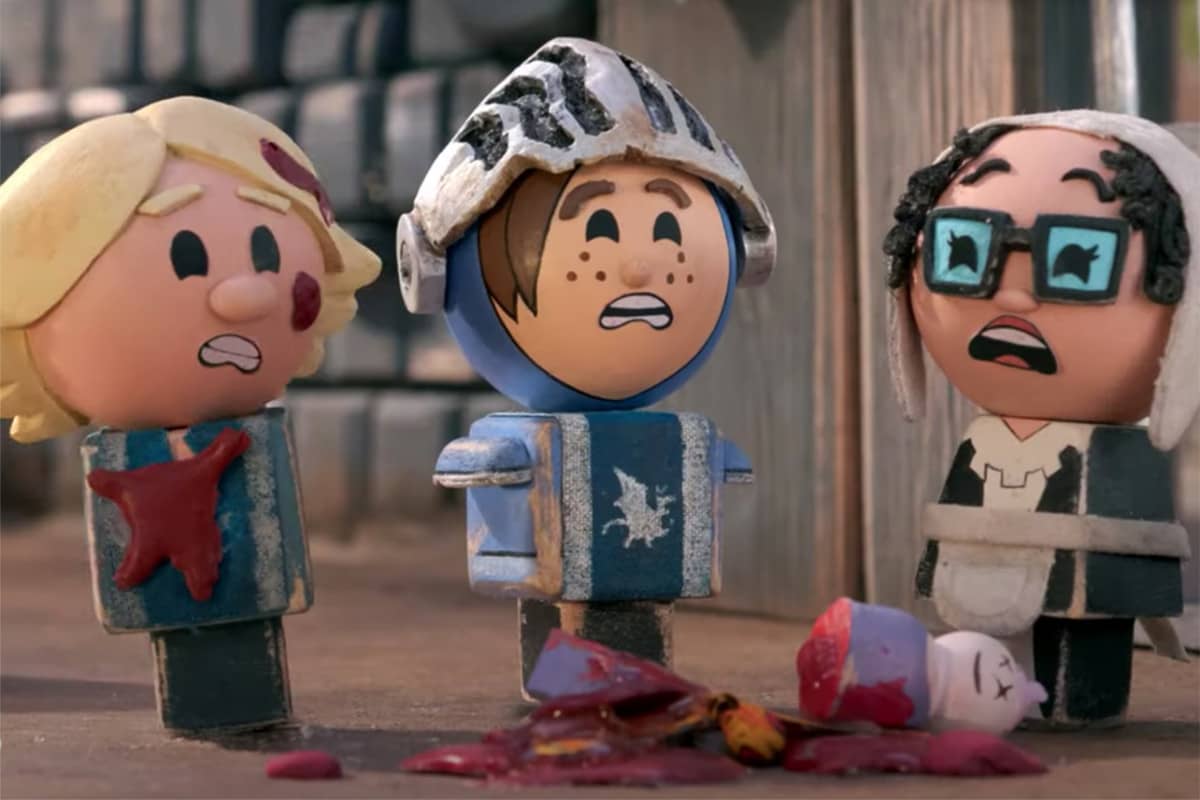 Hulu recently premiered CROSSING SWORDS, an animated series in the style of stop-motion featuring little round people with no arms nor discernable legs. It is set in a silly medieval world, the type that could only exist in a cartoon unconcerned with realism, and follows a young squire who is on a quest to be a brave and noble knight. This is all the more challenging when everyone around him, from the monarchy, to his parents and siblings, to his neighbors and friends, have not an ounce of morality in them.

Nicolas Hoult (The Great) stars as Patrick, the squire who so desperately wants a life he can only dream about. His skills are not good, but he does have tenacity. Somehow, despite being the only one around trying to do good, Patrick keeps failing. Thankfully, his buddy Broth (Adam Pally, Happy Endings) will stick by him and show him how to have a good time, even if Broth isn’t helpful at all.

Of course, Patrick is used to not be helped. His sister, Coral (Tara Strong, The Powerpuff Girls), is a pirate queen; his brother, Ruben (Adam Ray, She-Ra and the Princesses of Power), is a forest outlaw; and his other brother, Blarney (Tony Hale, Veep), is a clown. All three tormented him mercilessly as a child, getting him into trouble and sometimes causing bodily harm. Patrick’s parents, Glenn (Breckin Meyer, Franklin & Bash) and Doreen (Wendi McLendon-Covey, The Goldberg), weren’t sympathetic or protective, either. So you see, Patrick has had a rough life.

But like any young, naïve, eternal optimist, Patrick is determined to overcome. Which has led him to seek employ under King Merriman (Luke Evans, The Alienist) and Queen Tulip (Alanna Ubach, Girlfriends’ Guide to Divorce), whom are depraved and horrible to one another, as well as their subjects. It’s a small enough kingdom that these rulers immediately know who Patrick is, though they often forget any past dealings with him as soon as he leaves their sight. Or so it seems.

CROSSING SWORDS is created by John Harvatine IV and Tom Root, whose names might be familiar to you if you’re a fan of Robot Chicken, another vulgar stop-motion animated series. Although CROSSING SWORDS isn’t made up of shorts, instead featuring full-length episodes and an ongoing plot, it contains many of the same dick jokes and similar types of humor. People often get kicked in the balls, puked on, and have chum thrown at them. Boobs and dicks are frequently on display on the toys. Death seems to have little meaning.

One might say CROSSING SWORDS is a more complex version of Robot Chicken, as if spun off of one of its shorts. However, the fact that continuity only applies when they feel like it kind of goes against that, even if other animated shows often do the same thing. Most scenes from this new series would feel right at home tucked into that veteran program.

CROSSING SWORDS is not going to earn these guys any new fans, but if you already like their style, then you’ll probably be happy. There’s an all-star voice cast, and although the special effects are jenky (like fire made out of cotton), it fits very well with the toy style. The images are pleasing and cute, contrasting nicely with the comedy. Details are paid attention to, with great visual gags, and the characters even look like their wood is aged and paint is chipping. So it looks fantastic. But people will tune in most likely for the jokes, which only appeal to specific viewers.

CROSSING SWORDS’ first season is available on Hulu and it has been renewed for a second season.