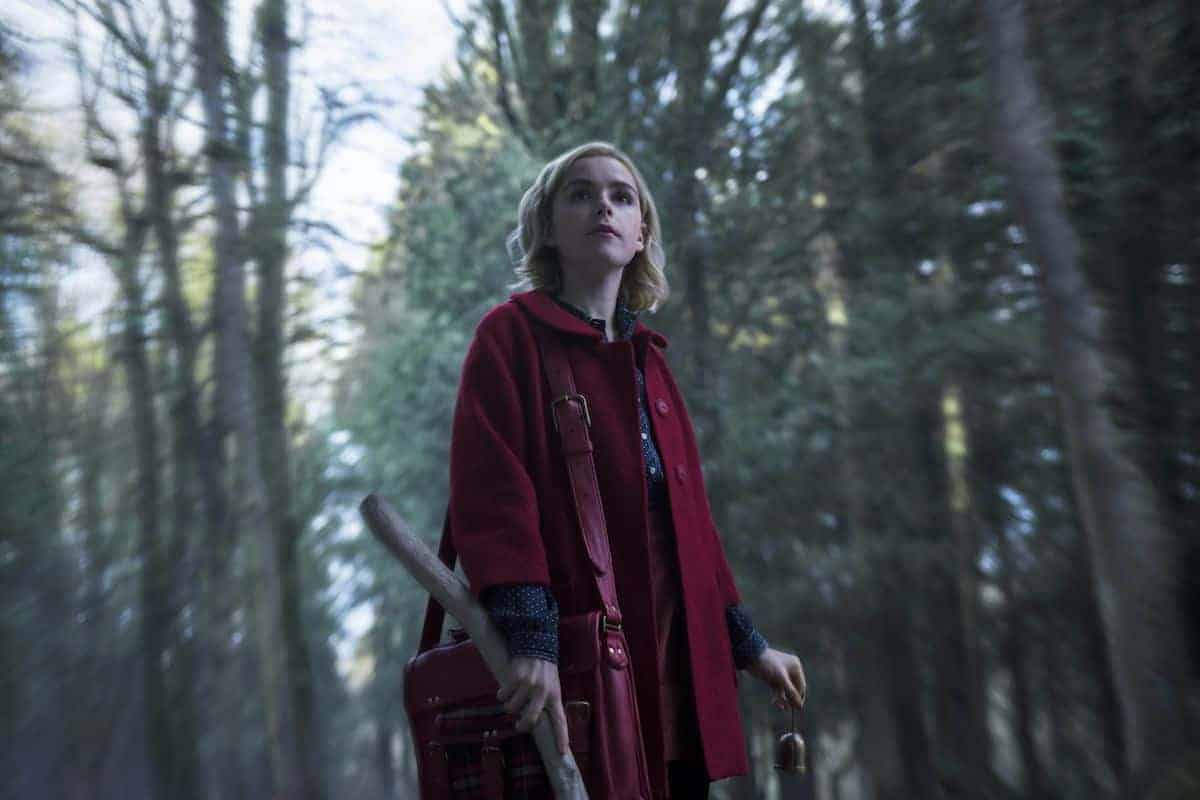 Netflix released the first season of the highly anticipated CHILLING ADVENTURES OF SABRINA last week. Based on the recent Archie comic series of the same name, the titular character is a half mortal, half witch teenager who has come of age and is asked to sign her soul over to the Dark Lord. But Sabrina has doubts, especially when she is lied to about free will and told she must give up her human friends and boyfriend. Does she really have a choice, and why is Sabrina so important to the witch world?

This is not your (parents’?) Sabrina the Teenage Witch. Although fans of the 90s sitcom will recognize character names and broad-stroke personalities from CHILLING ADVENTURES OF SABRINA, that is pretty much where the similarities end. This is a dark, creepy, macabre version of the tale. Followers of the Dark Lord call themselves a church, but they’re closer to a cult. Actual teen witches might kill mortals for fun. Blood is used in rituals. And Satan is involved. So don’t expect to sit down with your family to watch this.

CHILLING ADVENTURES OF SABRINA looks almost flawless. Its design and setting are very artistically done, visually stunning. Special effects are top-notch. This all contributes to the purposely dreary tone. There is also a sense of fun, whimsy, and magic injected in, lest you think it’s just a dark drama. Costumes, props, the Spellman house… it is all excellently done.

My complaint here is that the picture far too often goes blurry on the edges. This is a great effect when used sparingly, but SABRINA uses it constantly. It becomes distracting and confusing. The show would play much better of 95% of this was taken out.

For tone, I recommend looking to the CW’s Riverdale, which may or may not be set in the same universe. (There is no crossover in season one, although Riverdale is mentioned as a place.) Both share a sense of sexiness and danger. Though SABRINA is louder and more extreme, with the magical element kicking things up a notch.

Most of the characters are equally good. Mirando Otto (24: Legancy) and Lucy Davis (the original The Office) are fantastic as aunties Zelda and Hilda, respectively, updating the stern and goofy bases into complex and surprising characters. Ross Lynch (Austin & Ally) plays perfect puppy dog Harvey Kinkle. Chance Perdomo (Shakespeare & Hathaway: Private Investigators) is very interesting as Sabrina’s ‘cousin’ Ambrose, confined to house arrest. Tati Gabrielle (The 100) is perfect as Prudence, leader of the Weird Sisters. Michelle Gomez, memorable in her run on Doctor Who, brings a similar performance to the teacher who inadvertently gets involved. Richard Coyle (Coupling) is awesome as high priest Father Faustus Blackwood.

Less satisfying is Kiernan Shipka (Mad Men) as Sabrina. Shipka is a talented young actress, as proven by past work, but I’m not certain her performance matches the rest of the show. At times, she feels like the strong young woman she is, standing up to authority, even her aunts, protecting her friends, and making her own way. This put-together sixteen-year-old is where Shikpa shines. But she seems less comfortable with the strange and weird. And this may be mainly a writing issue, but it’s completely strange that Sabrina doesn’t notice massive changes in her favorite teacher. I do think Shipka can grow into this role, or some adjusted direction may help. But at least initially, she’s unfortunately not as good as the show itself, not something you want from the lead.

Which is not to say that I don’t recommend CHILLING ADVENTURES OF SABRINA. It’s a compelling, creative story that is mostly well executed. I had planned to watch just one episode for this review, but felt like I had to go straight into the second. Once I submit this article, I do plan to watch the rest. There are just a few things to work on for season two for the program to make full use of its potential.

The CHILLING ADVENTURES OF SABRINA is available now on Netflix.