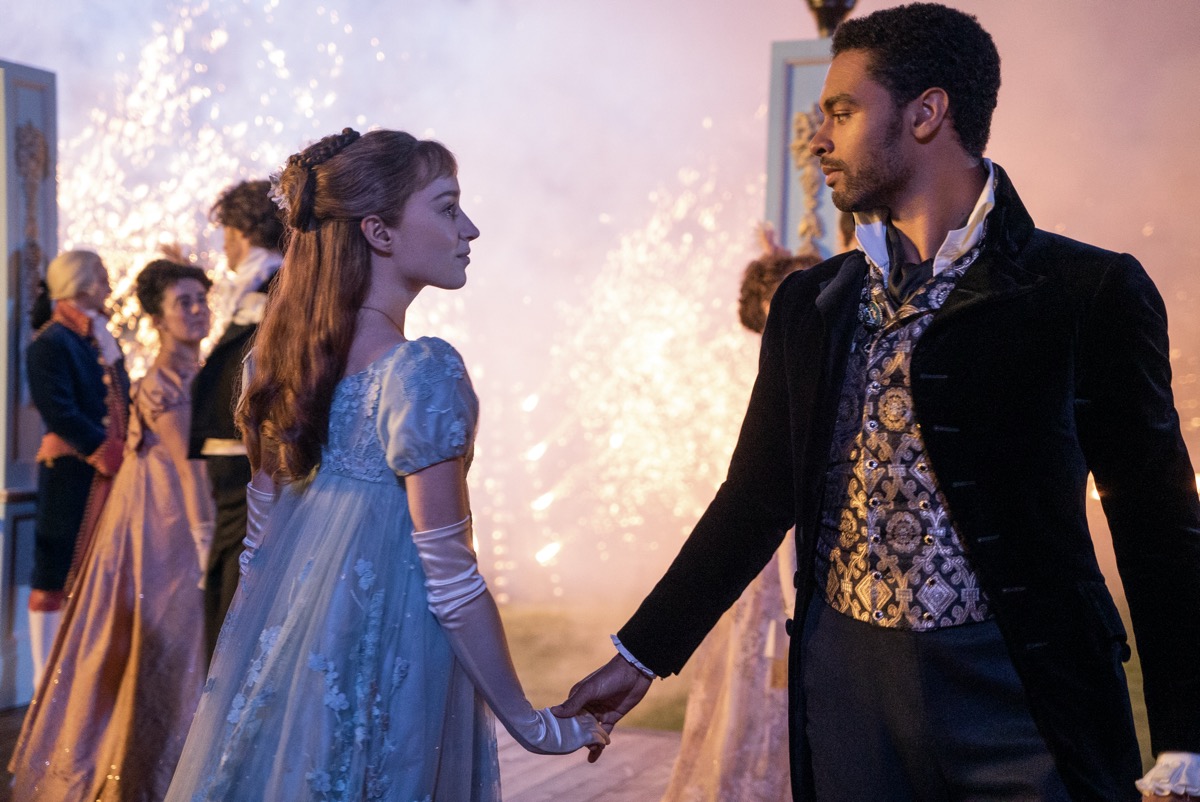 On Christmas day, Netflix dropped the eight-episode first season of BRIDGERTON, a gift to many viewers. Created by Grey’s Anatomy’s Shonda Rhimes, this period piece is soapy drama from the Regency era of English history beginning around 1813. Part Pride and Prejudice, part Gossip Girl, the costumes and performances (not to mention narration by Dame Julie Andrews as Lady Whistledown) make it seem classy, even as its modern pacing will help it appeal to more modern audiences.

The story of BRIDGERTON begins as the local young ladies are introduced for courting season, essentially a period of open dating and marriage proposals. The Bridgerton family is one of the most powerful in town, and daughter Daphne (Phoebe Dynevor, Dickensian) even catches the eye of Queen Charlotte (Golda Rosheuvel, Lady Macbeth), making her pairing most promising. That is until her older brother, Anthony (Jonathan Bailey, Broadchurch), now head of the household, sabotages her prospects, leaving her with a single, unattractive suitor. Luckily, Daphne’s mother, Lady Violet (Ruth Gemmell, Deep State), plots with her friend, Lady Danbury (Adjoa Andoh, Fractured), to pair Daphne with Simon, the Duke of Hastings (Rege-Jean Page, For the People), who is refusing the marry, and just happens to be Anthony’s best friend. Simon and Daphne see right through the matchmaking, but decide that a fake relationship would serve them both.

Nearby family, the Featheringtons, is headed by Baroness Portia (Polly Walker, Rome), who has three daughters she’d like to see married off. This includes young Penelope (Nicola Coughlan, Derry Girls), who isn’t even interested in boys yet, and wishes she could delay a year like her bestie, Eloise Bridgerton (Claudia Jessie, Dixi). The girls would rather look at books, and are terrified when Portia’s new charge, Marina Thompson (Ruby Barker, Wolfblood), is revealed to be pregnant, wondering how that could happen outside of marriage so they can avoid it themselves.

And all of this drama is captured by Lay Whistledown, who distributes gossip pamphlets that the upper crust devour, all the while wondering at her identity.

These details are merely scratching the surface of BRIDGERTON, which is very involved and has a lot of characters. However, it doesn’t get bogged down by this, keeping its focus on a few, and using the supporting players appropriately where needed. The pacing isn’t too fast, but it isn’t slow, either, an enjoyable romp that should expand beyond the appeal of most shows set in this era.

One glaring question I had going into BRIDGERTON is how the series would deal with race, seeing as how I couldn’t imagine Shonda putting forth an all-white cast, as one might expect for a program set in this era, other than seeing a minority as a maid or other ancillary role. The answer is, the show doesn’t deal with it. Certain families in the series, including the Queen and the Duke himself, are just Black and there’s no comment one way or the other. Ethnicity doesn’t seem to play into the attraction of one character to another, nor does it influence the social structure displayed. Basically, it’s a reimagining of history that allows performers or all colors to participate and ignores what actually was, to its credit. I hope more shows follow suit.

I loved Downtown Abbey, but am not a fan of P&P nor most other shows like this. Yet, I do love Shonda, and I found this cast of mostly-unknowns (to me) to be charming and compelling. At eight episodes, it’s an easy season to swallow, and I can easily see myself finishing it, even as I had no plans to before watching. I wouldn’t call it must-see, but it is good, and if you like some soapy historical stuff, BRIDGERTON has you covered.

BRIDGERTON is available now on Netflix.