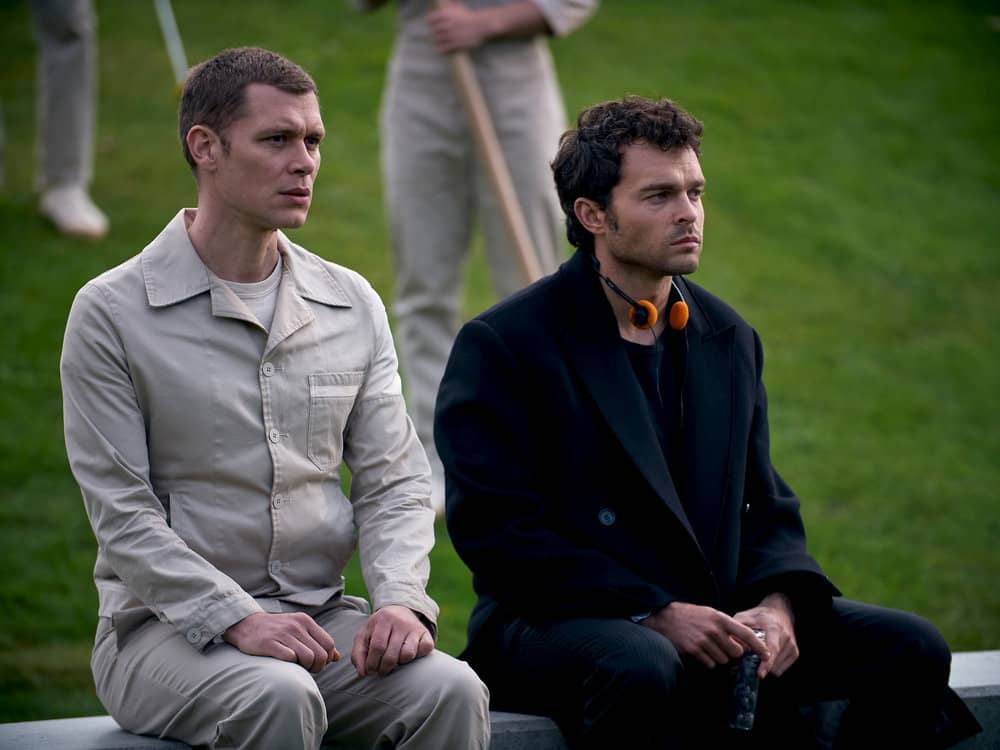 Peacock, the new NBC streaming service that launched today, wants to take you to a BRAVE NEW WORLD. The book by Aldous Huxley gets a nine-episode television adaptation, with two episodes free to everyone and the other seven for subscribers only. For this review, I watched only the first two.

BRAVE NEW WORLD is one of my favorite books, though it’s been a little while since I read it. Many of the familiar elements are present in this version, such as the extreme caste society. On the higher end, everyone is connected at all times by a network, and are barred from any privacy, monogamy, or pregnancy. Children are genetically engineered from birth and raised in groups, rather than by parents. Out in the desert live the ‘savages,’ or people closer to what we have today, who still marry. But they’re violent and miserable, while the ones in the New World are happy. If they’re not happy, there are plenty of drugs readily available to make them so.

Most of the main characters are there, too. Bernard Marx (Harry Lloyd, Game of Thrones) is near the top of the food chain as an Alpha Plus. But he’s a little off. He soon becomes taken with B+ Lenina Crowne (Jessica Brown Findlay, Downton Abbey), who experimented with a single partner for a while. Together, they journey to the Savage Land and meet John (Alden Ehrenreich, Solo: A Star Wars Story), who is being raised by single mom Linda (Demi Moore, Empire). But revolution breaks out while they’re there. While back at home, the Director (Ed Stoppard, Knightfall) and Mustafa Mond (Nina Sosanya, Good Omens) try to figure out why CJack60 (Joseph Morgan, The Originals) is acting funny after the death of his friend.

But there are quite a few differences, too. The character of Helm (Hannah John-Kamen, Killjoys) is quite a bit different from her literary counterpart. And the Savage Land is a lot more developed and fleshed out, with more action going down there. I’m not sure if these additions are designed to build a world that can keep going past the initial adaptation of the novel, inevitably a one-season project, or if they’re just meant to enhance aspects of the story that aren’t explored all that much on the page.

Neither the Enlightened nor the Savages have it all that good. There are pluses and minuses to both worlds. Sure, the Savages have more freedom, but they also have less overall, and are treated like dirt, made to play for the amusement of the advanced society. Either one of these two worlds could make up a post-apocalyptic landscape, and combining them is both interesting and a bit confusing because it’s hard to know which side to root for. Don’t we want things to get better? But at what cost? With more focus on the Savage place, this springs fully to light.

What might be remarkable is that the main ideas presented in BRAVE NEW WORLD no longer feel new. There have been so many dystopian series, especially as of late, that have borrowed elements from the source material that this one almost feels like a repeat of what’s come after the book. I’m not sure if that’s a testament to how far Huxley could see into the future, or just proof that good ideas are often stolen and done to death. With Westworld, Altered Carbon, Black Mirror, and so many others, does BRAVE NEW WORLD stand a chance of breaking through?

I guess, maybe. There’s some fine acting, though it stops short of breathtaking (which I’m not sure is fully the actors’ fault). The obligatory sex and danger is present in this iteration of BRAVE NEW WORLD, and that keeps the pacing moving. I’m not sure these particular ideas are begging to be explored again on screen, but they are always relevant. I liked it, but didn’t fall in love the way I expected to. Still, I want to finish watching.

The biggest obstacle BRAVE NEW WORLD faces is the platform it is on. Peacock rudely launched without much access for those who don’t enjoy watching TV on a phone or browser. Certain Smart TVs can access it, and it works with Chromecast. But it lacks an app on Amazon Fire, Roku, TiVo, or other streaming devices. Personally, I was very annoyed at the hoops I had to jump through to watch, and hope Peacock gets its act together if it wants to succeed. Then again, at a too-high price tag ($9.99/month for the ad-free version without nearly the catalogue that Netflix or Hulu boasts), do we even need another streaming service? Maybe it would be easier for another streamer to absorb the content.