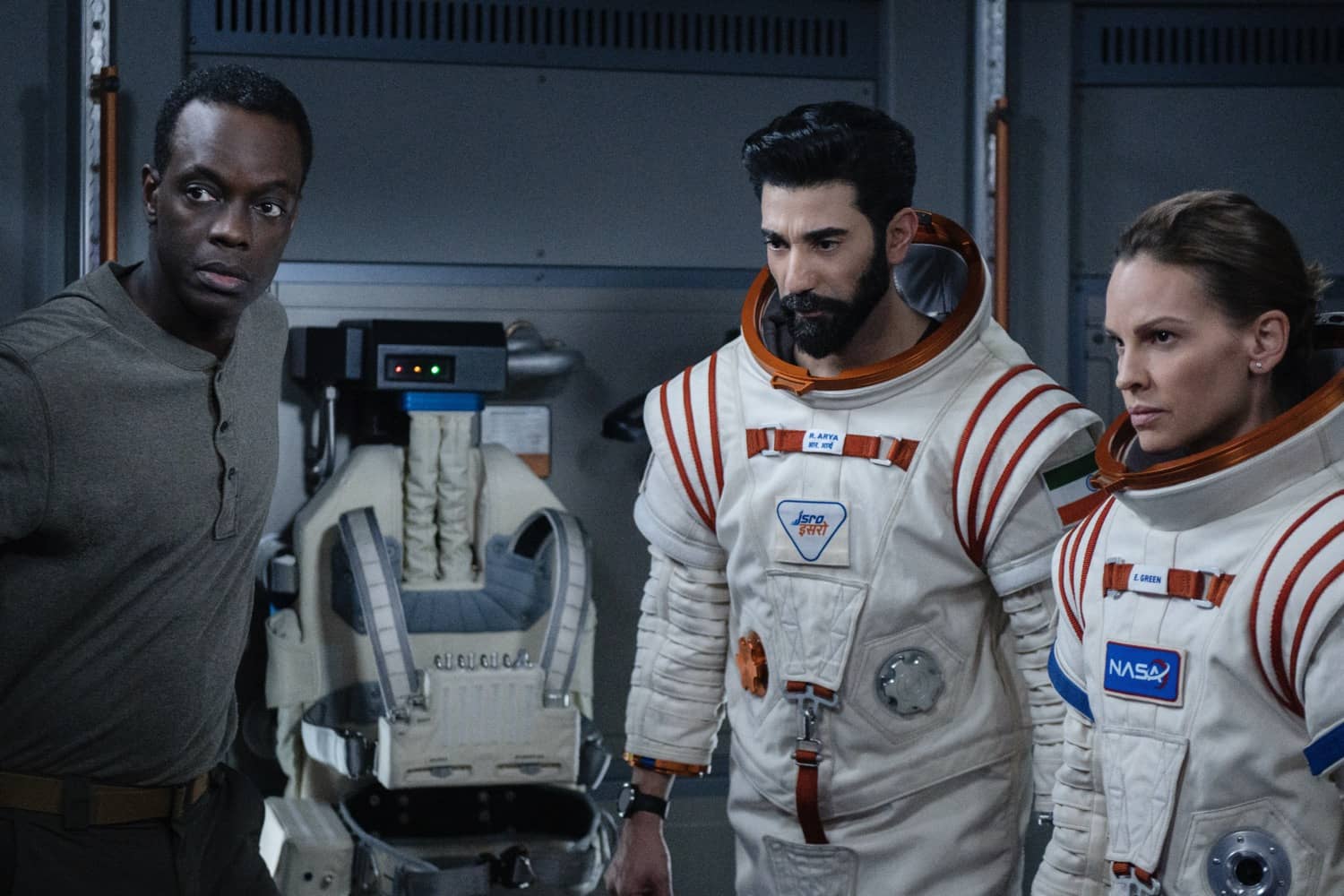 This weekend, Netflix released AWAY, a drama revolving around the first manned mission to Mars. A five-person, internationally diverse crew is sent on the trip, and problems, both the personal and the technical, plague them. Back on Earth, the supporting characters have their own challenges, while being called upon to help the travelers from a great distance.

It isn’t clear what time period AWAY is set in. From all appearances, it’s today, with no notable technological advancements in television, cell phones, or other everyday objects. Yet, there is some serious technology available for a moon base and Mars mission, and inexplicably those in space can pull out their phones and talk to people on Earth whenever they want, which seems extremely advanced and far from what we have now. So I’m left assuming this must be some sort of alternate dimension from our own, where technology evolved a little differently, though that isn’t made clear.

This isn’t the only thing AWAY can’t seem to decide. Sometimes it’s an astronaut- (and other terms for the other team members) fueled action adventure, with disaster lurking. Other times, it’s a family and co-worker drama, with personal issues coming front-and-center. Sometimes it seems to be a tale of international cooperation, while at others, it’s an illustration of how different various cultures can be. AWAY is a lot of things, which isn’t in of itself a bad thing, except they seem so disjointed that it feels unfinished or not a purposeful choice.

I started off knocking the series, so I should say, despite those flaws, I am enjoying it after three episodes. There are some interesting issues raised and plot points explored. I am glad that AWAY is not afraid to linger on long scenes when the story calls for it, but not jam such in unnecessarily for arguments or calls home. The direction is solid and the production looks amazing, with movie-quality special effects and sequences.

The cast is also terrific. I’m not a big Hilary Swank fan in general, but the Million Dollar Baby does a great job with the part of Emma Green, captain of the mission and lead of the series. The pressure Emma is under in a job where she will never please anyone is easy to relate to, and the stress it puts her under is very understandable. Her husband is played by The Good Wife’s Josh Charles, and his struggle after a stroke is engaging to watch. Their daughter, Alexis (Talitha Eliana Bateman, Annabelle: Creation), is also quite an interesting character, well performed, though her scenes often feel the most stuffed-in.

The rest of the crew are played by Vivian Wu (The Last Emperor), Ato Essandoh (Chicago Med), Ray Panthaki (Marcella), and Mark Ivanir (The New Pope), and each do an admirable job. Their characters are complex and layered, and I’m glad AWAY is getting around to revealing a lot about each, one per episode, as the story unfolds. I find their portions more compelling than Emma and her family, even though I like both halves.

AWAY presents an intriguing tale with well-developed players and looks fantastic. If it could lock in just a little more on some of the details, such as what it wants to be exactly, it could be pretty darn good. I don’t think it’ll be one of those cultural touchstones that everyone talks about or rated must-binge. Nor should it be binged, as the episodes are at-times dense and should be allowed to rest before jumping into the next. Yet, I think most people that do check it out will probably be satisfied with the drama shown. I am, and I think it quite likely I’ll finish the entire season in a week or two.

The first season of AWAY is available on Netflix now.