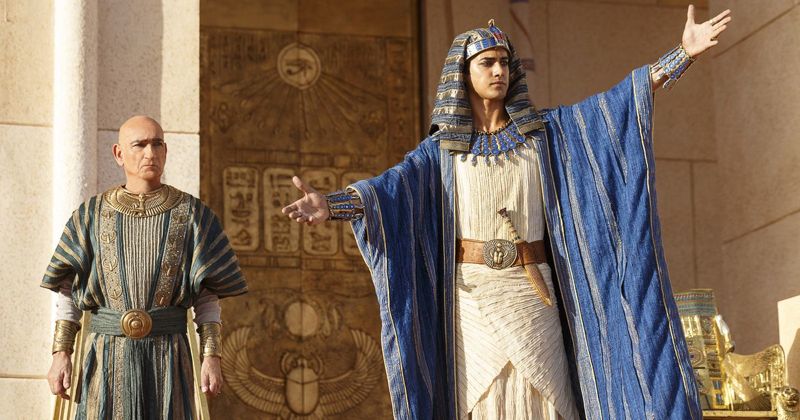 Spike begins its six-hour miniseries TUT tonight at 9 p.m. ET, with the rest to premiere Monday and Tuesday. Based on the famous Egyptian pharaoh, King Tutankhamun, the special covers the brief events at the end of Tut’s life and reign as he struggles to establish his rule as an adult against those who have been making decisions for the child king, with a fair amount of sex thrown in.

One can presume that TUT is based upon truth, but there isn’t a whole lot known about the pharaoh. His tomb is one of the best preserved ever found and DNA matches can put together a few details, but it’s not like there are surviving books from the day to give us many facts. Thus, the makers of TUT have a long leash with which to tell their story. Regrettably, they choose to make it a very modern soap opera rather than a sweeping epic.

Much of the first two hours of TUT, all that I have viewed so far and all that I probably will ever view, is given over to personal drama. Tut (Avan Jogia, Twisted) is married to his sister, Ankhe (Sibylla Deen, Tyrant), but she has been unable to give him an heir. She’s in love with Tut’s comrade, Ka (Peter Gadiot, Once Upon a Time in Wonderland), which in these superstitious times leads Tut to believe could be the problem. Luckily for Tut, he soon meets Suhad (Kylie Bunbury, also Twisted), who doesn’t realize who he is, meaning they have to soon sleep together.

This love rectangle is predictable and trite. Because TUT takes place prior to just about all other tales viewers are privy to, it’s possible that the way things are laid out in TUT was fresh in its own time, but knowing that little historical evidence backs up this sequence definitely makes it feel like a copy of so many other things. TUT mashes up several very familiar plots and fails to give us enough originality to set it apart.

More interesting are the political machinations happening in the palace. Vizier Ay (Ben Kingsley, Hugo) seems wise and fair-minded, aspiring for more than servitude, but content with his lot until opportunity should arise. General Horemheb (Nonso Anozie, Zoo) is far more open about his frustrations, unhappy when Tut begins telling him to run the army. Priest Amun (Alexander Siddig, Game of Thrones) is a little murkier in his intentions, but seems to be walking the halls of power for a reason.

Were TUT to focus on these three men and their relationships with the boy king, I think it would be a far superior miniseries. There are plenty of places to see the sappy romantic stuff on television, but far fewer to watch a great epic unfold, and love could be a part of this without stealing away so much focus. True, even if the politics parts of the program were played up, it could still come off as cheesy, but it’s less likely to, even when the motivations are simple and underdeveloped.

Instead, TUT tries to balance both and fails to make either one all that compelling. Given such a blank canvass, with only a few pinpoints to connect, one would hope that the writers would chose to tell an original story, playing with the rich landscape available to them. Instead, TUT is almost a paint-by-numbers thin copy of too many other tales. This is highly disappointing because it really, really does not have to be and just feels lazy. With the interesting costumes and settings, it’s easy to see what TUT might have been, which is likely to leave one dissatisfied with what it is.

If you’re so inclined, you can catch TUT the next three nights on Spike.