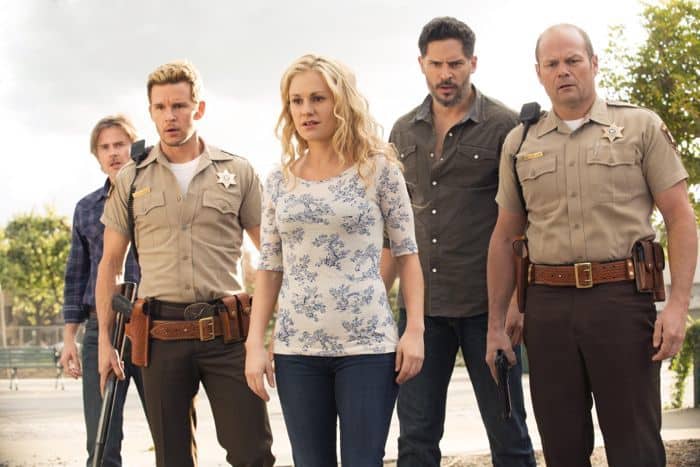 HBO’s TRUE BLOOD ended its penultimate season last summer on quite a cliffhanger. After a time jump, most of the main characters are gathered at a vampire-human alliance rally when some bad dudes show up. It’s quite a shocker, and one that left many fans quite tormented over the long hiatus.

This weekend, TRUE BLOOD returns for its final season, and it picks up right where it ended, during that same scene. It’s an action-packed, exciting opening that doesn’t give viewers a chance to breathe as they are dumped back into the world. It’s actually a really cool way to start things off, providing an immediate hook, something that will have the audience talking and pumped for the rest of the season.

The rest of the premiere hour, “Jesus Gonna Be Here,” takes place during that same night, and it’s dark. Very, very dark, and I’m not just saying that because the sun is on the other side of the earth. This is one of the scariest, most nerve-racking episodes of TRUE BLOOD yet. If they want to go out as a memorable series, not soon forgotten, this is the way to do it. Most of the players are in mortal danger, and not everyone survives. It immediately sets a new tone to the often humorous show, and while I can’t imagine this year will be laugh-free, the first episode back almost completely is.

I admire TRUE BLOOD for going in this direction. I like my drama dark and dangerous, and “Jesus Gonna Be Here” fits the bill. In a show about vampires and other monsters, people should die periodically, especially as a war between the sick vamps and everyone else is going down. This is an extremely serious situation, and one will feel the weight of that when viewing this episode.

I wonder, at this point, if anyone is considered non-expendable. After all, there are only ten episodes left to go, and then it’s over forever. With the number of individuals in harm’s way, it seems quite likely that not all of them will get to return home alive. Will TRUE BLOOD allow a blood bath, with a significant number of casualties, or will it sparingly take out a couple of key people at opportune moments?

Thankfully, the newest installment is not all action. I absolutely love seeing the fight scenes, but there are some good characters here, and they deserve to get development, too. As soapy as the series can be, romance and betrayal, lust and murder, all verging on over-the-top, it does not shy away from some occasional authentic pathos. Given the set up here, I believe we’ll get more of that than we’re used to in season seven.

One example of this comes courtesy of Ms. Sookie Stackhouse (Anna Paquin). Sookie has a gift or a curse, depending on how you look at it, where she can read people’s thoughts. This is dealt with a bit in the beginning of TRUE BLOOD, but is mainly a plot device in recent years. “Jesus Gonna Be Here” brings the emotional toll this takes on the waitress front and center, forcing her to deal with the burden she carries and how people treat her because of it. One person most might not suspect of getting on her bad side does so this week because of this, but Sookie is hurt even more than the person with the ill-timed musings. I hope we continue to see more of Sookie’s struggle, exploring the internal pain she lives with every day, because it makes her so much more interesting.

Sookie is far from the only one who gets such focus. At least two pairs with beef between them have the chance to talk a little bit of it out, and more than one couple faces a rocky go of things. There may be some love blossoming in an unexpected place as two characters reveal their backgrounds to one another, and another tries to reign themselves in, resisting their base urges.

Plus, we get terrific scenes of Pam (Kristin Bauer van Straten) as she searches for her maker, Eric (Alexander Skarsgard), last seen by fans burning in the sun.

All in all, “Jesus Gonna Be Here” just may be the best season opener TRUE BLOOD has done yet, giving me great hope that the writers will take the program out in a satisfying way. TRUE BLOOD airs Sundays at 9 p.m. ET on HBO.