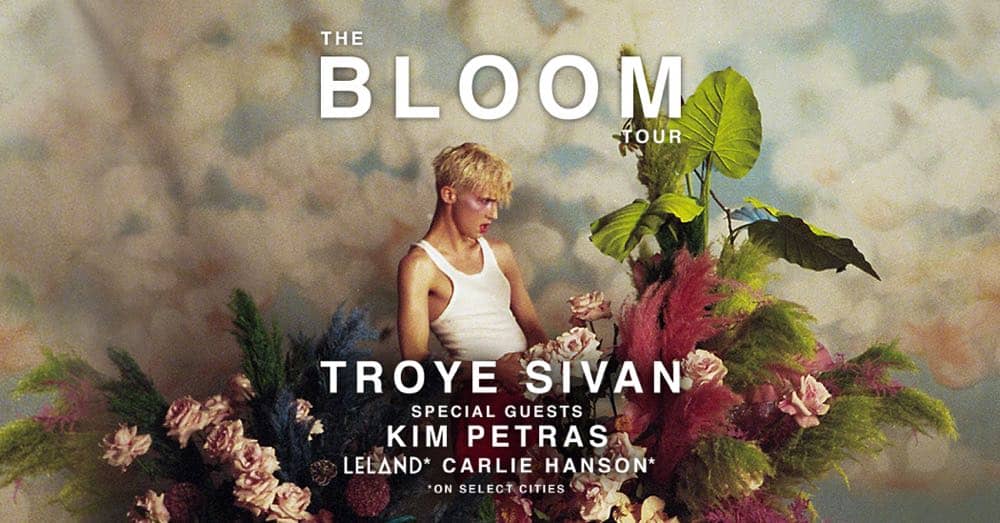 After teasing information about The Bloom Tour during his appearance on TODAY earlier this week, Troye Sivan revealed the full itinerary today. The North American headline run, produced by Live Nation, will kick off on September 21 in Dallas at the Pavilion at Toyota Music Factory. It will include his first-ever show at New York City’s Radio City Music Hall (October 9) and performances at the Greek Theatre in Los Angeles (October 30) and The Masonic in San Francisco (November 1). See below for itinerary.

Fans who download the official Troye Sivan app, available on Apple Store and Google Play, will have access to a chance at advance tickets during the pre-sale, which begins on Tuesday, June 5, at 9:00 AM PT. Exclusive content, merchandise and more will also be available to app users. Tickets go on sale to

the general public beginning Friday, June 8, starting at 9:00 AM PT at LiveNation.com and TroyeSivan.com. All tickets for the North American dates will include a CD copy of Troye’s new album, Bloom, which will be released by Capitol Records on August 31.

The album pre-order launched today at Troye’s online store. He performed two songs during his visit to NBC’s TODAY – his new single,  “Bloom,” which already has over 10 million combined streams worldwide, and the album’s lead single “My My My!”

The New York Times, in a Sunday Arts & Leisure cover story, observed “Troye Sivan Is a New Kind of Pop Star: Here, Queer and Used to It  The 22-year-old singer is climbing the charts while demonstrating how his sexual orientation is both part of his art and beside the point.” Pitchfork noted, “his latest single, ‘Bloom,’ is all about living in the delicious present. A gentle, rolling beat and strips of electric guitar cut through airy synth pads…Vocally, Sivan’s as open and earnest as he’s ever sounded.” Noisey said, “Sivan has re-announced himself as a pop heavyweight, and one who is not here to make any compromises at that.” NYLON declared, “It’s Troye Sivan’s year. If this past January’s ‘My My My!’ single cemented him as a budding gay icon, his latest release, ‘Bloom,’ is his grand flowering.”

“My My My!” was the top trending topic worldwide on Twitter after its release in January. Combined global streams of the track, which Pitchfork named as one of the “first great songs” of 2018, are approaching 200 million. The official video, directed by Grant Singer (Lorde, The Weeknd), became the #1 trending clip on YouTube and has nearly 30 million views.

Cumulative streams of “The Good Side,” another track from the album, now surpass 40 million worldwide. V Magazine observed, “If artists are thinking of claiming 2018 as their year, they’ll have to steal it from Troye Sivan. The 22-year-old is on fire…[‘The Good Side’] shows the growing pop star’s range.”

Troye supported his 2015 debut album, Blue Neighbourhood (Capitol Records) with two sold-out North American tours. Blue Neighbourhood, which topped the iTunes charts in 66 countries, has sold more than 2.5 million adjusted albums worldwide and is certified Gold in the U.S. Streams across all platforms exceed 2.5 billion while video views have surpassed 500 million. Associated Press named Blue Neighbourhood as the No. 1 album of 2015 and Rolling Stone awarded it four stars. The single “Youth” claimed the No. 1 spot on Billboard’s Hot Club Play chart and has been certified Platinum in the U.S. Troye has appeared on the covers of Rolling Stone, Out and V Magazine. His numerous awards include a Billboard Music Awards trophy and two GLAAD Media wins.