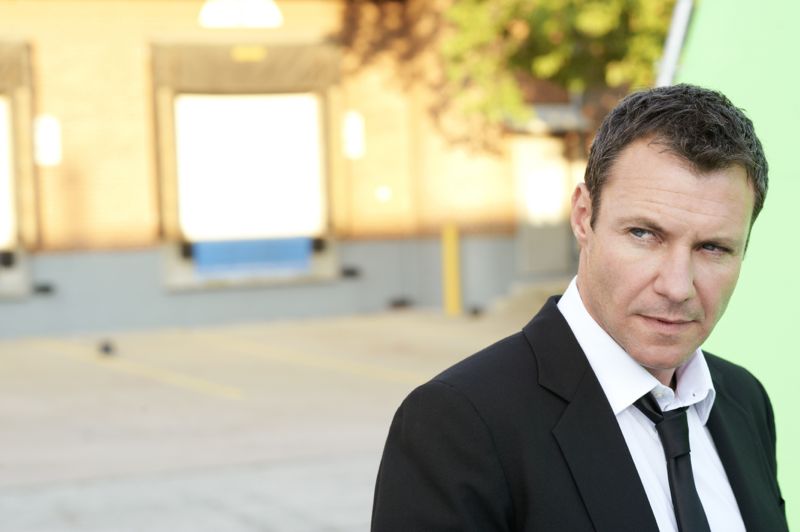 TRANSPORTER: THE SERIES, a French-Canadian spin-off of the successful film franchise of virtually the same name, first premiered two years ago in Germany, and is just starting a second season there. After Cinemax declined to air it in the States, it finally finds a home on TNT as it premieres this weekend.

Note: I have not seen any of the movies in the series, so this review is strictly about a single episode of the television show, the first in the American broadcast order.

Frank Martin is The Transporter. A man who can get anything he is hired to from point A to point B (or C or D, for that matter), he is focused on his work, which he does extremely well. This, despite the fact that he consistently breaks the only three rules he has: never change the deal, no names, and never open the package. He’s a capable, smooth bad-ass, the type of guy women want to sleep with and men want to be. If that sounds cheesy, well, it’s no cheesier than the dialogue.

TRANSPORTER: THE SERIES is fast-paced and adrenaline-pumping. There are numerous car chases in the first installment alone, with the promise of plenty more where that came from. Action sequences are frequent, often with a slowed-down camera to better highlight the stunts being performed. There are guns, of course, one-note villains and sexy, exotic women for our hero to sleep with, though none he’s tempted to begin a relationship for. Clichés are tossed about freely, and we know Frank will always win.

There is something to be said for predictable popcorn fare. Many people enjoy seeing such scenarios played out, the fantasy of fast cars and willing women, living a life they will never live. It’s escapism entertainment, to be sure, and the writing is not particularly smart or high quality. But the production looks cool, with neat, foreign landscapes (the show is filmed in Canada, France, and Germany) and attractive individuals inhabiting it.

Chris Vance (Rizzoli & Isles, Burn Notice, All Saints) brings the titular role to the small screen. Because of the non-American involvement, he may be the only face recognizable to local audiences, and even he’s not a household name. Vance is well-suited for this role, and while I know he can do better than TRANSPORTER THE SERIES, he’s giving it his all, delivering a fine performance for what this is and probably having a ton of fun.

The focus is mainly on Frank and the case-of-the-week, but the show does list four other main characters, who occasionally appear. There’s Inspector Tarconi (François Berléand, the lone actor reprising his role from the movies) as Frank’s police friend who keeps him out of trouble, mostly. Carla Valeri (Andrea Osvárt, Elsö generáció) is former CIA, a tech genius who gets Frank his information. Juliette Dobois (Delphine Chanéac, Splice) is investigating Frank, so he should be careful around her. And, of course, there’s the comic relief, Frank’s pal, Dieter Hausmann (Charly Hübner, Ladykracher).

Our pilot is called “Trojan Horsepower,” which aired as episode two in France and episode seven in Germany. The broadcast order of all of the episodes have varied quite a bit (check Wikipedia for details), but it really doesn’t matter because TRANSPORTER: THE SERIES does not seem like the type of show to introduce long-ranging mythology or a serial story. If you like procedurals and this type of thing speaks to you, you’ll probably enjoy it.

Similarly, there have also been different cuts of the installments for each country. Had TRANSPORTER: THE SERIES aired on Cinemax, as originally intended, each week would probably have differed in running time and we’d get to see some boobs, as that’s the type of story this is. Moved to TNT, it will be trimmed into matching parts, and any nudity or cursing is danced around, with nothing to offend the basic cable audience, which is a bit disappointing, given the format, but it is what it is.

TRANSPORTER: THE SERIES is not for me, but I was still at least mildly entertained. If you enjoyed the films, check it out, and my guess is you’ll be satisfied.

TRANSPORTER: THE SERIES airs Saturdays at 9 p.m. ET on TNT.