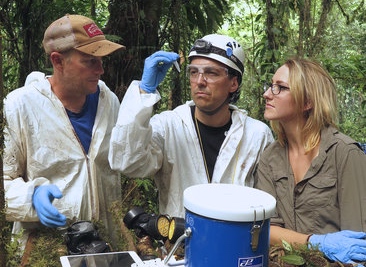 The quest to expand the boundaries of human knowledge takes scientists to the edges of the Earth where unseen peril lurks around every corner. From the deepest and darkest rainforest jungles to the edges of active volcanos, these men and women are searching for answers to some of the world’s greatest scientific mysteries. Out of their labs and into the wilderness, they place their lives into the hands of a brotherhood of elite survivalists who are sworn to keep every expedition safe, risking their lives to ensure everybody makes it in, completes their mission, and gets out alive.

TRAILBLAZERS takes us on a wild journey of modern-day exploration when the world premiere airs Friday, April 29th at 10PM only on Discovery Channel.

Each hour-long episode of TRAILBLAZERS will follow three elite survivalists as they lead separate teams of scientists through some of the most dangerous regions of the world in the search for clues and discoveries that could lead to scientific breakthroughs. From the largely unexplored island of Papua New Guinea, to the Jurassic Park-like jungles of Bolivia and the volcanic landscapes of Ecuador – Gary Humphrey, Nick Koumalatsos and Shaun Keilen represent some of the most elite trailblazers in the world. With decades of combined survival experience between them- do these trailblazers have what it takes to not only survive the harsh elements, but accomplish their mission while keeping everyone on their team safe?

GARY HUMPHREY has 17 years of experience serving in the Royal Marines and the UK Special Forces. His survival skills have been honed in every imaginable environment – the Arctic, dense jungles, and unforgiving deserts.

NICK KOUMALATSOS served in the Marine Corps Special Ops for 12 years where he served time in some of the remote and hostile jungles in Asia. Never to shy away from a challenge he now owns his own company where he trains police, military and militia all over the world.

SHAUN KEILEN returned home after serving 3 SEAL platoons in the Middle East. He now works as a private contractor for the US government overseas in Afghanistan, and uses his extensive medical training as a SEAL to aid in life-threatening situations.

Harsh elements, dangerous creatures, and lethal terrain are just a few of the obstacles the trailblazers and scientists must face- but putting egos aside and working as a team to accomplish each mission may prove to be the ultimate challenge. The stakes are high but the rewards could change the world and science as we know it.