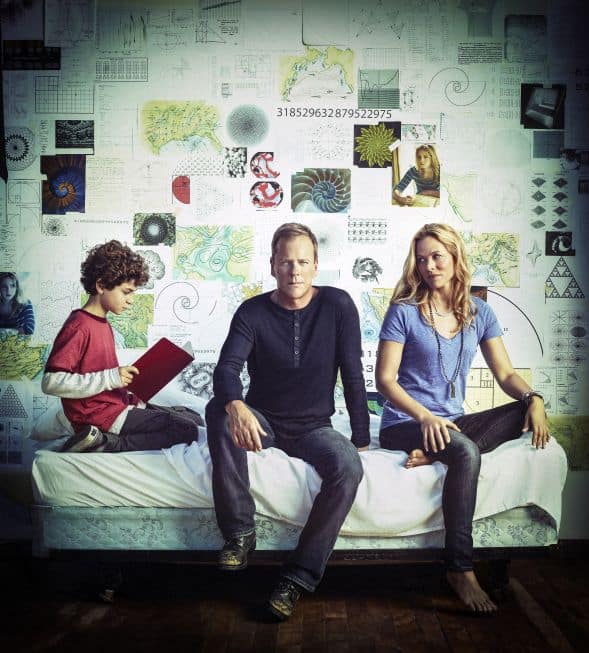 FOX’s TOUCH returns this Friday with two new hours. When last we see Martin Bohm (Kiefer Sutherland), he is in California, led there by Jake’s (David Mazouz) number trail. He encounters Lucy Robbins (Maria Bello, who guest starred in last spring’s finale), whose own daughter, Amelia (Saxon Sharbino, I Spit on Your Grave), is kidnapped after touting the same sequence as Jake. Now, teamed up, they must find Amelia and stop the dastardly corporation, Aster Corps, who will use the numbers for evil, rather than good.

TOUCH has undergone a major cast overhaul heading into season two, ditching social worker Clea Hopkins (Gugu Mbatha-Raw), left behind in New York when the Bohms head to the West Coast, and adding four new stars, including Lucy and Amelia. For some shows, a drastic change like this would be startling. However, in TOUCH, it seems a natural part of the growth of the story. The series follows Martin and Jake, and when they move to the opposite end of the country, they will necessarily be surrounded by different people.

It makes sense, too, then, that many of the recurring players of the first season are not in evidence in these initial two hours back. Some, like Randall Meade (Titus Welliver), seem to have already run their course, while others, like the Asian girls, are simply gone. It won’t be too disappointing if many season one players don’t come back, as the story has moved into the next phase, and so, too, must the people in it. However, the pattern is often illustrated as a spiral, so TOUCH may eventually circle back around to them.

I really like the changes TOUCH has made. Whereas season one seemed a little wandering, a little unfocused, playing a bit with mythology, but also presenting a lot of seemingly stand-alone stories, season two tightens up the plot. Now, there is a singular enemy, and all of the various characters in the show are involved in one situation. It helps to focus, and while there are still plenty of coincidences and patterns, they are usually guiding towards something specific.

As the first episode back, “Event Horizon,” begins, Jake narrates, telling viewers that his lack of speech is about to change. He doesn’t utter a word out loud in these two hours, so it seems a little odd to start this way. Does he just mean that he will begin communicating more clearly, though utilizing the tools he already has, or does he mean that he will start talking? Others like him, including Amelia, have no problem with vocalization. Why does Jake stay silent?

The dynamic between Jake and Martin is already being shaken by the inclusion of Lucy with them. Amelia does provide a handy way for Martin’s time to be freed up, leaving his son with Lucy. But she’s not just a babysitter, with the action following her, as well as Martin. I am very curious how things may change even more when they find and rescue Amelia, which seems a foregone conclusion. TOUCH isn’t nearly dark enough to kill a child viewers are made to care about.

TOUCH places Amelia in the most unlikely place. She is staying with someone we think of as a good guy, based on the story laid out in “Event Horizon” and the second part, “Closer.” I won’t spoil where she is, but suffice it to say, it’s unexpected. In keeping with what the show does best, TOUCH sets up some storylines in the first two hours, but only gives viewers a taste of what’s to come, leaving many unanswered questions.

Unanswered questions hover over the other two main characters quite thickly. The first, Calvin Norburg (Lukas Haas, Inception), is the brain behind Aster Corps’ recent activities, but he is feeling bad about what they plan on using his ideas for. He wants to save the world, and finds that hard to do in his current position.

Calvin’s path already begins crossing the rest of the cast quite quickly, being in L.A. at the same time they are. I don’t know if we will join up with them or pursue his own path, but he definitely will not remain outside of the circle. The question is, will he have power to help them? And what insights might he offer into what is going on?

Lastly, TOUCH has added a true face of evil in Guillermo Ortiz (Said Taghmaoui, Lost). Ortiz is traveling the globe, slaughtering people who know about the number sequence. We don’t yet know what his motivation is, though there are hints in his physical appearance, nor do we know what his end game might be. However, it does seem like his negative emotions about what he’s doing, which are present, are not enough to sway him off the course, so he could end up being quite a danger to the protagonists, since he cannot be reasoned with or moved by sympathy.

All in all, TOUCH’s season two ups the ante and makes the latest installments more exciting by shrinking the world in which this tale unfolds. I am curious as to if this is a trend that will continue more and more as the show goes on, spiraling towards an impressive climax. At least, that’s what it appears should happen at this point.