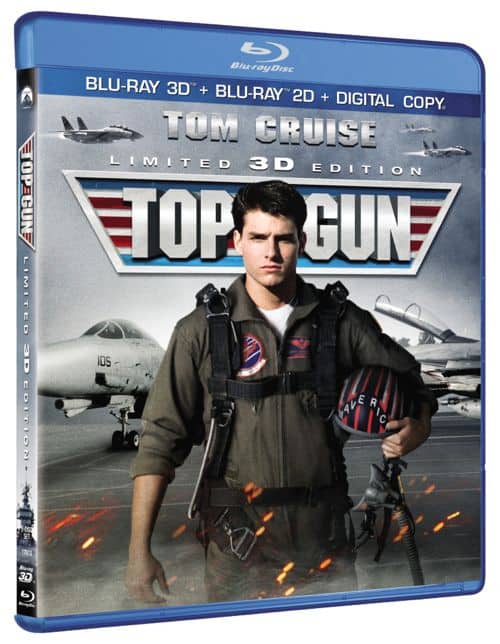 Seat42f and Paramount Home Entertainment have teamed up to give THREE lucky winners a copy of TOP GUN 3D on BLURAY. For a chance to win leave a comment below telling us why you want to add TOP GUN 3D to your BLURAY collection. Only one entry per person. Contest ends February 26th. Winners will be notified on February 27th via email so make sure to use a valid email address when you post your comment.

TOP GUN, the movie that helped define a generation, prepares to soar into a new dimension as it makes its home entertainment debut in breathtaking 3D.  The action-packed drama will take audiences into the danger zone in a Blu-ray 3D/Blu-ray 2D two-disc set on February 19th from Paramount Home Media Distribution.  The release follows an exclusive six-day theatrical run in select IMAX® 3D theaters beginning on February 8th.

TOP GUN was re-mastered from high resolution original negative scans and painstakingly converted to 3D by Legend3D under the supervision of the film’s director, Tony Scott.  The artists at Legend3D began by studying every shot in the film and mapping out each element on screen in order to create a realistic sense of depth.  This process allows the artists to enhance the experience of each scene individually so that the appropriate elements are brought forward or back, depending on the scene.  Rendered in 3D, the film’s complex, long shots reveal extraordinary depth and clarity, allowing viewers to explore every detail of the action.  From the spectacular aerial dogfights to the intense close-ups in the cockpits, each frame gives the audience the feeling of being part of the story.