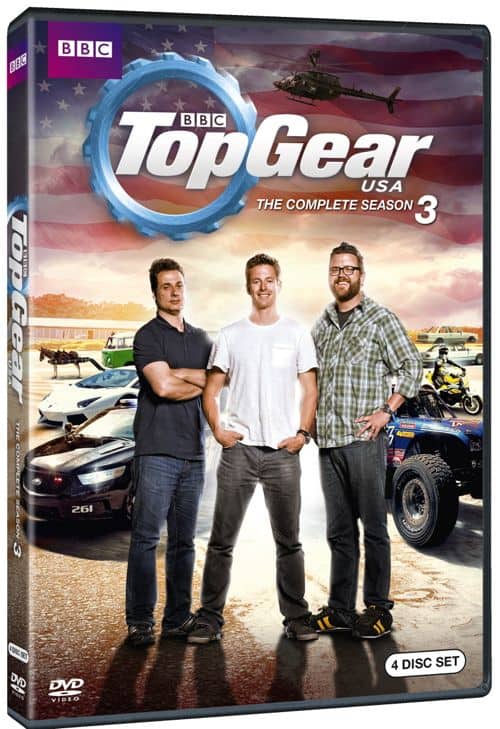 Seat42f and BBC Home Entertainment have teamed up to give THREE lucky winners a copy of TOP GEAR USA Season 3 on DVD. For a chance to win leave a comment below telling us why you want to add TOP GEAR USA Season 3 to your DVD collection. Only one entry per person. Contest ends August 20th. Winners will be notified on August 21st via email so make sure to use a valid email address when you post your comment.

BBC Home Entertainment brings the boys back for another ride when Top Gear USA: The Complete Season 3 races onto shelves August 6, 2013. Hosted by comedian Adam Ferrara, champion race car driver Tanner Foust and racing analyst Rutledge Wood, this season is chock full of super-cars, high-adrenaline action, extreme stunts and eccentric adventures. Collecting all 16 episodes from the season, as well as over 50 minutes of exclusive bonus content including extra scenes and interviews with the hosts, this DVD proves that if it has four wheels, these guys want to drive it (and if they’re Adam, wreck it).

In Season 3, Tanner, Adam and Rutledge embarked on some of the most epic journeys on the planet while testing the limits of the world’s most prestigious – and infamous – automobiles. From the Swamps of Louisiana to Utah’s Monument Valley, from Iceland to the streets of Tijuana, the boys race against speed boats, snowmobiles and jets, test the most modern police cars (hint: it’s not the Crown Victoria) and see how far you can REALLY get on one tank of gas. An explosive series of tests help determine America’s toughest car, and the boys design their own RVs… as well as the perfect zombie-proof car for the apocalypse. And when Adam takes over the show to do whatever he wants, he teaches Tanner and Rut how to play football with an automotive twist.