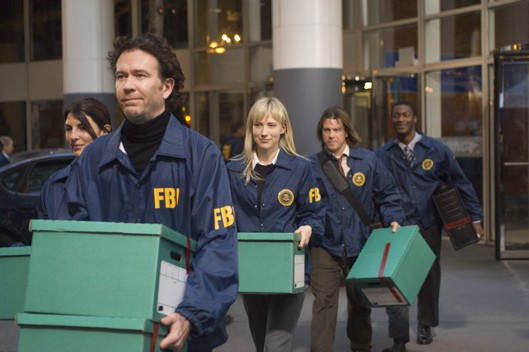 TNT has renewed its fast-paced, light-hearted caper drama Leverage for a fifth season, just as the fourth season is shaping up to score the show’s biggest ratings yet. TNT has ordered 15 episodes of Leverage, with the fifth season slated to launch in summer 2012. The series – which centers on a gang of grifters, hackers and thieves out to settle scores against the rich and powerful – currently airs Sunday nights at 9 p.m. (ET/PT). After the show’s Aug. 28 summer finale, Leverage will return to wrap up its fourth season with new episodes in November and December.

Leverage is the latest high-profile series renewal from TNT following new season orders for Rizzoli &amp; Isles, which is running neck-and-neck with TNT’s The Closer as basic cable’s #1 series; Falling Skies, which ranks as basic cable’s #1 new series for the year-to-date; and Franklin &amp; Bash, which ranks among basic cable’s Top 10 new series this summer. TNT’s top-ranked drama The Closer is in the midst of its extended final season, which will continue in the winter and wrap in summer 2012.

“While many shows decline in their second, third or fourth seasons, Leverage has defied the odds and continued to climb,” said Michael Wright, executive vice president and head of programming for TNT, TBS and Turner Classic Movies (TCM). “More and more viewers are discovering this weekly joy ride through wonderfully complex schemes and con games, all brought to life through smart writing, sharp directing and a terrific cast.”