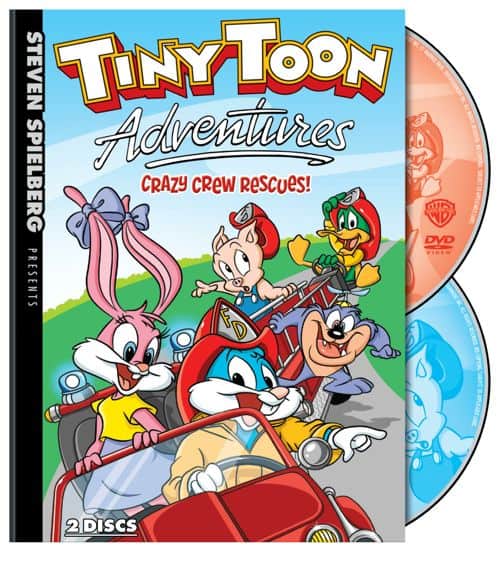 Seat42f and Warner Bros. Home Entertainment have teamed up to give FIVE lucky winners a copy of TINY TOON ADVENTURES CRAZY CREW RESCUES on DVD. For a chance to win leave a comment below telling us why you want to add TINY TOON ADVENTURES CRAZY CREW RESCUES to your DVD collection. Only one entry per person. Contest ends January 15th. Winners will be notified on January 16th via email so make sure to use a valid email address when you post your comment.

From Executive Producer Steven Spielberg, Tiny Toon Adventures is the entertaining, animated series that spawned a whole new generation of madcap Looney Tunes characters including Buster Bunny, Babs Bunny, Plucky Duck, Hamton J. Pig, among others. The characters reside in Acme Acres and are enrolled at Acme Looniversity, where they are schooled under the wise (guy) guidance of veteran toon legends such as Bugs Bunny, Yosemite Sam, Elmer Fuddand others in hopes of graduating with a “Diploma of Lunacy.”

Those wacky kids at Acme Looniversity are at it again! There’s never a dull moment at this prestigious learning institution with all the zany antics the Tiny Toon Adventures gang has in store. In Hog-Wild Hamton, Plucky Duck throws a rollicking party when Hamton’s parents go out of town but the bash soon gets out of control. Elmyra’s doll Babette comes to life and Plucky Duck competes with Babs Bunny to get the most photos in the class year book on Toon Physics. In Acme Cable TV, Babs and Buster Bunny turn into couch potatoes after a bout with the Taiwan flu forces them to stay home with nothing to do but watch Acme Cable TV all day. Plucky Duck stars in a hilarious parody of Thor Heyerdahl’s expedition on Kon-Tiki in Kon Ducki. Sepulveda Boulevard features a clever spoof of the classic film Sunset Blvd. starring Elmyra as a washed-up cartoon star hoping to make her comeback.  These and several other entertaining episodes are featured on the set.

“Tiny Toon Adventures is a clever, witty and beautifully animated series that has entertained fans for decades,” said Mary Ellen Thomas, Vice President Family & Animation Marketing and Partner Brands. She added, “These cartoons have successfully captured the essence of classic Looney Tunes with their memorable characters and clever storylines but have added a twist with great new characters and storylines. They offer something for viewers of every age. Tiny Toon Adventures fans have eagerly awaited the release of additional volumes of the series and we’re delighted to bring them this new release. If you’re a fan of exceptional animation, this is a must-have title for your home entertainment library.”