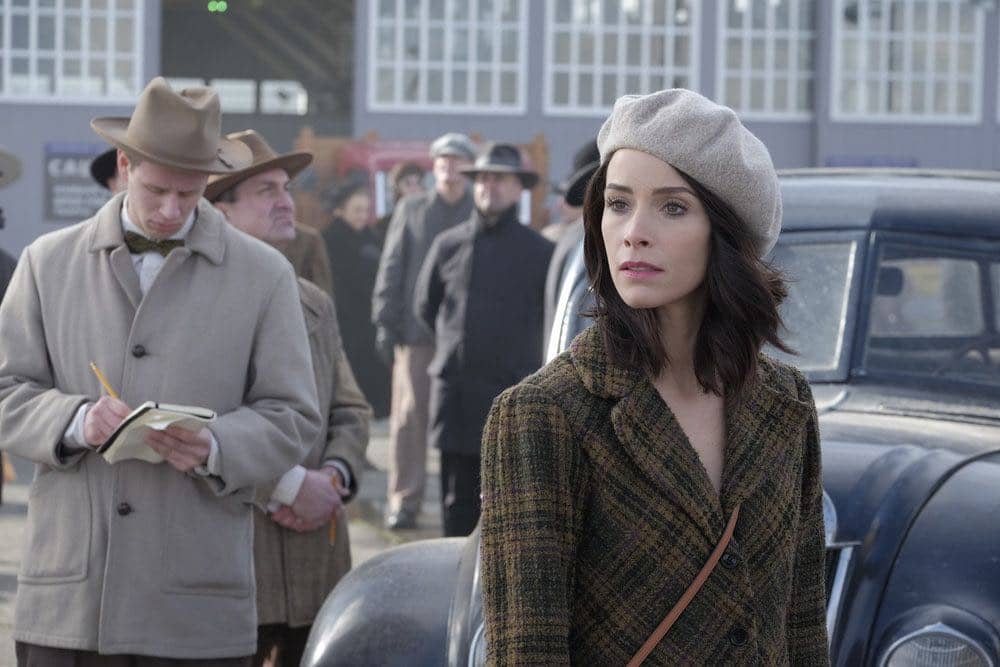 A ruthless villain steals a time-machine and the government quickly sends a team of a soldier, a scientist and a historian after him to eliminate him before he does irreparable damage to the existing timeline. In NBC’s new adventure series TIMELESS, the action starts and does not stop leaving little time to peel back the layers on the characters that are immediately introduced.

In order to get a better sense of who our heroes and villain are, while attending this summer’s Television Critics Association tour, we chatted with star Abigail Spencer to get the answers fans will want to know. Just who is Abigail’s character Lucy Preston and what part do she have to play in TIMELESS, Abigail reveals:

What is it like to portray a female time-traveler?
ABIGAIL: We’re supposed to be born in another time period, so every period I’m like, “I could live here!” The only thing is being a woman in the past is not always great. So that’s something we’ll explore on the show and I am very grateful for the present because we’ve made a lot of strides.

And you don’t have to go back that far!
ABIGAIL: [Laughs] I know. I mean, much like with the storyline with Rufus (Malcolm Barrett). With Lucy, putting a woman back in time and dealing with the situations and also as someone who doesn’t want to change history, that’s part of the part of the conflict. What’s going to grow for Lucy is she going to come to the other side where she feels compelled to change history or is she willing to let it be as it supposed to be. So I think a part of that will be a storyline.

There’s an episode in 1970’s. Will we see that internal struggle then?
ABIGAIL: You know, we haven’t shot that episode yet and I haven’t read the episode yet, but I’m sure that Lucy will be outraged and stand up for herself and it will be a real point of conflict.

Can you talk about the Flynn Garcia (Goran Visnjic) and Lucy relationship that kind of starts to develop?
ABIGAIL: It’s so interesting. We have this incredible actor, Goran Visnjic, playing Flynn, and I think that he brought a level of compassion and kind of mystery to the role that I wasn’t even sure if Shawn [Ryan] and Eric [Kripke] were aware of when they cast him. Flynn and Lucy have a real connection. And Goran and I really love working together. So at this point, yes, he’s the bad guy. But is he is really?

Goran described it like he was portraying the hero in the show. So it was a bit confusing.
ABIGAIL: [Laughs] That’s what I’m saying! Like everybody is the hero on the show. Nobody’s wrong in what they’re doing. It’s just they have different purposes and reasons. And what you’ll find out in Episode 2 is Flynn tells Lucy, “We’re going to be fighting side-by-side together one day.” So more Easter eggs will be dropped in every single episode of what Flynn and Lucy’s relationship is — that Lucy doesn’t even know about. Because when we meet her in this world, she has no idea about the journal. She has no idea about who he is. But there’s a few of those ongoing mysteries that will be revealed along with the closed-ended episodes.

What is the challenge of being in a show where anything truly is possible, literally?
ABIGAIL: I don’t know if you guys have seen RECTIFY, but this is so different. And that’s part of the challenge. This is epic. It is big. It is time travel. It’s just a different way of working. But I don’t approach the work any differently than a grounded character who has real pain and real problems. I mean, the way that I would approach Amantha is the way that I approach Lucy — as a totally, fully formed, fully realized human being and just trying to find the root and the weight of what she needs and what she’s not getting in her life. But the thing is, I want to have fun on the show too. So I think the real challenge of the show is finding the humor in it. That we don’t take ourselves too seriously. That we don’t lean into any of the tropes. That we really find that kind of early Spielberg-tone. When I came in to Shawn [Ryan] and Eric [Kripke], I said, “I don’t want to play a hero. I want to play a real person who trips and falls and might run into the airplane and might ruin the mission every single time.” Yes, she’s an excellent historian and her intellect is her superpower, but I want to always be like two seconds from falling on my face.

Is there a romance coming up for Lucy this season?
ABIGAIL: There better be! I’m all for it. But my hope is that it really gets drawn out. I think those are more interesting, the long-running love interests. But, at the same time, in the second episode you learn something about Lucy that you didn’t know from the pilot. So that which adds an interesting layer to her.

What excites you about the sci-fi genre and working in it?
ABIGAIL: [Laughs] I don’t know anything about the sci-fi genre. Like I’m a total novice. So even listening on stage, I was like, “Oh, wow. Oh, interesting.” I’m just really listening. I’m learning. I really am getting smarter by playing this part. I’m open to it. I mean I think that the thing is I was looking for a television show right after RECTIFY because it was ending. But I felt like Shawn and Eric kind of found me and that was such a blessing because right now, looking at the options, this was the most fully-formed, fully-realized heroine of the bunch. I mean, I get to play the fully-realized character and a lot of the other roles in other areas just aren’t like that. It’s really interesting. I’d been working in cable for a really long time and that was purposeful on some level, but not purposeful on other levels. For a long time, I just didn’t think networks wanted me because I was the lead of eight different network pilots that did not get picked up. So I was just like. “I think network doesn’t like me, so I’m just going to go work in cable where I’m appreciated.” But coming back to network, Shawn Ryan saw me do a pilot for ABC called GRACE that I did. Lesli Linka Glatter directed it, who I worked with on MAD MEN. Shawn actually saw that pilot and that’s why he wanted me to play Lucy. It wasn’t because of MAD MEN — I mean, he’d seen those things, but it was what he saw on a network pilot that never got picked up. So I’m excited that networks are like, “Okay, we’ll take you now.”

Have you been brushing up on your history or are you just winging it as the scripts come in?
ABIGAIL: No, part of wanting to do the show is I really wanted to learn something. I feel like, being an actor, the best way to learn and to be an empathic human being is I get to learn so much about people. I actually get to learn something new every time I take on a role. That’s something I never would have been exposed to otherwise. Like, for example, in the next episode about the Lincoln Assassination, I’ve been reading. I’ve been doing my own research because I want Lucy to have the gravitas of knowing what she’s talking about. In the Lincoln episode, in particular, I had no idea the historical element that we lay in it. There were four people that were supposed to be killed that night and Lincoln was just one of four. So we actually go into the original coup that was supposed to happen. I mean, it would have been devastating with the biggest murder of our government officials ever. And it didn’t happen. So we’re going to explore that in that episode and I really learned something.

To find out just what romance lies ahead for Lucy and if she resists the temptation to change the future, be sure to tune in for the premiere of TIMELESS on Monday, October 3rd at 10:00 p.m. on NBC.