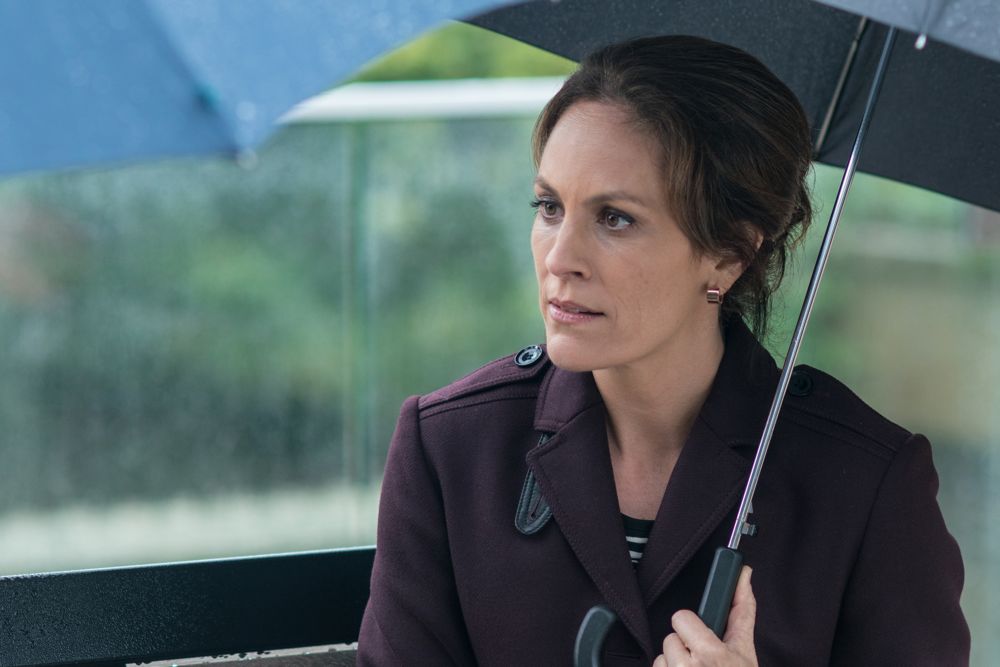 Just in time for the Season 10 finale, Annabeth’s character Monica Reyes resurfaces FBI Agents Fox Mulder (David Duchovny) and Dana Scully (Gillian Anderson) for another round of extraterrestrial adventures on Fox’s THE X-FILES.  Annabeth Gish had co-starred along Robert Patrick in Seasons 8 and 9 as their characters FBI agents Monica Reyes and John Doggett investigated the disappearance of Fox Mulder and a multitude of X-Files cases during his absence.

In an exclusive interview, star Annabeth Gish talks about returning to the spooky and sometimes unexplainable world of THE X-FILES.

What was your first reaction when you found out that Fox was bringing the show back?
ANNABETH:  I was just ecstatic.  As well as being a character and an actor in the show, I am also a fan of the show as a watcher.  So I was happy for many reasons and on many levels.

Then what was your reaction when you got the call to come back to play Monica Reyes?
ANNABETH:  That was the sweetest because it was the best news.  It was bittersweet for me because Rob Patrick, who played my partner John Doggett, wasn’t also doing it.  But he and I chatted about it and he said, “go forth!” So I missed him, but I was very happy to reprise the role of Monica.

Will you be appearing in more than one scene of the finale?
ANNABETH:  Yes, I’m in multiple scenes.  [Laughs] That is about all I can say.  But it is part of the intricate piece of the puzzle — Monica reveals an integral piece of the puzzle.

How did it feel to step back into her shoes and inhabit the character again?
ANNABETH:  It was wonderful.  It was sort of that paradox in that it was very surreal and at the same time it was easy and familiar.  To be back, you realize that your character had a particular cadence or way of chatting or talking or moving and that just kind of comes back to you over time.  The fact that it is still there in your body as an actor is great.  So it was nice.  It was like visiting with an old friend.

With the increasing number of TV shows being brought back, have you been approached outside of THE X-FILES to revisit other roles?
ANNABETH:  No, this is the first time I have ever done it. So it is completely new and it was wonderful.  As an exercise, it was really fascinating — especially because it was a character that I only played for 2 years, instead of 9 years.  I missed her. There is still so much unknown about Monica that I would love to explore.

So you are open to the possibility of playing her more if Fox continues the show beyond this limited-run number of episodes then?
ANNABETH:  Yes, of course! But who knows what they will do, right?

Will THE X-FILES explain what Monica has been up to since we last saw her?
ANNABETH:  Very quickly we see where she’s been and what she has done with her time.

Has she been in touch with her ex-partner John Doggett at all?
ANNABETH:  [Laughs] I can’t say!

Has the intervening years made Monica more of a “believer” in the spiritual or the supernatural, or less so after whatever journey she has been on?
ANNABETH:  That is a complicated question and I think it would reveal aspects of her character.  So you’ll just have to wait and see.  But she has been a “believer” for many, many years.

What for you was fun about revisiting the show?
ANNABETH:  It was pure fun to go back up to Vancouver.  I never filmed there for THE X-FILES, so it was fun to go to where it all began.  It was also fun to work with the cast again.

What surprised you about the show this time around?
ANNABETH:  That the more things change, the more people stay the same.  It was just easy and comfortable to be back and working with Chris [Carter].  It was a pleasure.

Were you surprised that there is still such an avid and enthusiastic fan base for the show?
ANNABETH:  No. I think it is a real testament to how loyal that I am sure the fans are and have remained over the years.  I also think it is a testament to the quality of the show and the questions it asks.  Because even with 10 years of time passing, all of the questions raised in all the episodes whether it is in a fun way or a joking way, they are still really relevant.

Do you have fans still reaching out to you with questions about the show or your character ever after all these years?
ANNABETH:  Yes, obviously, because of social media, which has allowed a lot more access and conversation between fans and actors. It’s great.  It kind of makes everyone kind of conversational.

Were you surprised that the show came back to such high ratings in a time period where nearly every TV show is a bit ratings-challenged?
ANNABETH:  I think it is a phenomenon that has withstood the test of time.  Even after 10 years, the chemistry of Mulder and Scully is still there and the interest in what THE X-FILES uncovers is still obviously there.

Is there something you feel you learned from the series, both back when it was on earlier and now?
ANNABETH:  That the world is vast and there is much that is unknown and there are important questions to be asked.

What can you share about what is coming up in the finale?
ANNABETH:  [Laughs] Nothing!  There is not a thing I can sneak.

What else are you working on at the moment that you can talk about?
ANNABETH:  I’m working on SCANDAL.  I just started working on it.  I’m doing a recurring role — and that’s about as much as I can say.  [Laughs]  People have so very careful these days, I guess because of social media.  Most of us want to watch a TV show reveal itself in real time and not hear about it before with spoilers and whatnot.  So all you can say, “I’m on this show and I’m having fun!”

What drew you the role on SCANDAL?
ANNABETH:  Obviously, it is a majorly popular political show with strong female characters on a show created by Shonda Rhimes, who is a powerhouse in the industry.  Those are all amazing things that I would love to be a part of.

You seem to have landed in roles that are rooted in the zeitgeist at the time.  What do you attribute that to?
ANNABETH:  [Laughs] Isn’t that interesting?! I’ve never thought of that.  It’s the perfect word:  zeitgeist, whether it was SONS OF ANARCHY or THE WEST WING, which was quite big when I joined at the end.  Might be dumb luck.  I don’t know!

That has to be fun, riding this big wave over very successful shows and get to be a part of each one.
ANNABETH:  It is a gift for sure.

What would you like to share with the fans about either THE X-FILES or SCANDAL?
ANNABETH:  I am very excited for everyone to see everything!

To see what intriguing part Monica Reyes has to play in the Season 10 finale of THE X-FILES, be sure to tune in on Monday, February 22nd at 8:00 p.m. on Fox.  (Then also be sure to keep an eye out for Annabeth in her next big role on ABC’s SCANDAL, starting Thursday, February 25th.)