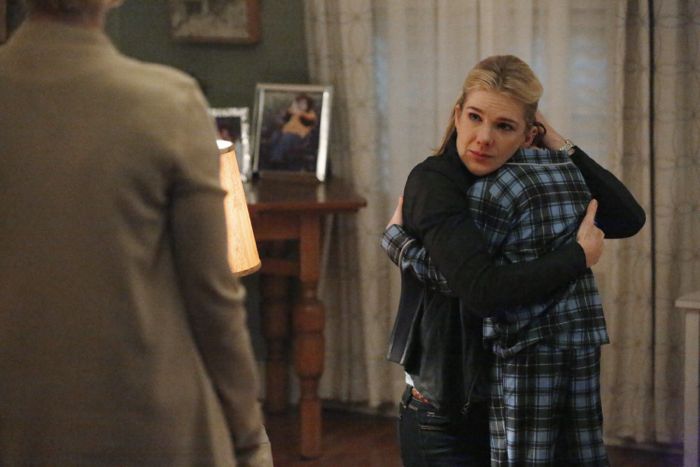 A broadcast television series is either a procedural, where the story follows a repetitive, mostly self-contained structure every week (think NCIS, CSI, Law & Order, etc.), or a serial, an ongoing narrative where things change. Procedurals tends to get more viewers in the short-term, but serials have longer shelf lives and more passionate followers. A program can’t be both, right? Well, ABC’s new drama THE WHISPERS tries to be.

THE WHISPERS begins with a little girl, Harper (Abby Ryder Fortson, Transparent), and her mother, Amanda (Autumn Reeser, No Ordinary Family). Harper has a new imaginary friend, which Amanda thinks is cute. But viewers quickly learn that this unseen being may not quite be as imaginary as Amanda believes, and the game the ‘whisperer,’ Drill, is playing is a dark one. It’s a suspenseful, interesting opening with some ripe possibilities.

From there we meet the real stars of THE WHISPERS, Claire Bennigan (Lily Rabe, American Horror Story) and Jessup Rollins (Derek Webster, Harry’s Law), federal agents tasked with investigating strange cases involving kids by their boss (Alan Ruck, Spin City, Ferris Bueller’s Day Off). This is the component that feels much more procedural. Some of what Claire and Jessup look into is very case-of-the-week type stuff, and while there is definitely a larger mystery at play, it feels like much of the screen time will be taken up by crime solving.

This is a disappointment because there many, many crime shows on television. I don’t know if it’s just easier to justify any plot that involves putting together pieces of a puzzle when there are law enforcement agencies on the scene, but television cannot seem to get enough of cops, the CIA, and the FBI. It’s frustrating because THE WHISPERS seems likely a very compelling program if it would fully commit to its conceit, but holds itself back by giving into these too-familiar scenarios.

Which is not to say that the whole first hour is disappointing. There’s definitely something going on with Claire’s family, which includes her deaf son Henry (Kyle Harrison Breitkopf, Being Human), as well as Lena Lawrence (Kristen Connolly, House of Cards), her husband, Wes (Barry Sloane, Revenge), who is on a mission across the world, and their daughter, Minx (Kylie Rogers, Shooter). These people will contribute to the more interesting part of THE WHISPERS. The question is how much screen time will be sent with them, versus Claire and Jessup working cases. Hopefully, a lot.

There’s one more main character whom I haven’t mentioned and that’s because his name is not revealed for much of the pilot (though it is on the show’s website, which I would not recommend checking because it spoils a twist I probably should have seen coming but didn’t). Played by Milo Ventimiglia (Heroes, Gilmore Girls), he is likely the key that will clue the other leads in on what is actually happening, and I’m curious to see where the show is going with him.

The tone of the show isn’t one of super high quality. It definitely feels like a broadcast show, albeit one that would normally air during the regular season, not the summer months. The creepy tension underlying the initial hour is a bit forced and a bit tame, with death even being downplayed a bit to make it more suitable for general audiences. I wouldn’t let me young children stay up and watch it, but this doesn’t come anywhere close to as scary as what cable can do. That, like the procedural part, neuters it a bit.

Still, as far as broadcast network summer fare, THE WHISPERS is the best we’re likely to get this year. It’s not a bad show, but that’s still a little regrettable when there are so many better offerings off of the Big Four, highlighting how far the old guard has fallen in the modern era. The likes of Rabe and Connolly can and should be doing better.

Oh, and Reeser is regrettably wasted here, a travesty that bothers me for the first few acts.

THE WHISPERS premieres Monday at 10 p.m. ET on ABC.