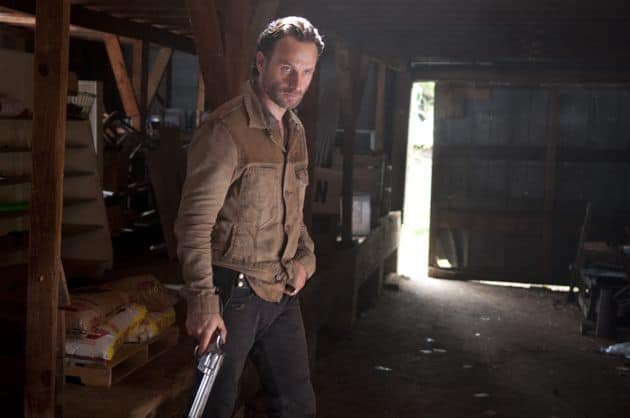 AMC’s THE WALKING DEAD builds tension this week in “Arrow on the Doorpost” not with armed conflict, but with a peace treaty negotiation. Andrea (Laurie Holden) arranges a meeting in a barn between Rick (Andrew Lincoln) and the Governor (David Morrissey). They quickly kick her out of the negotiations and, rather than calm fears, their time together only heightens the drama.

I did not think about it until “Arrow on the Doorpost,” but Rick and the Governor have not spent a lot of time face to face. It’s one thing to know about the crazy, dangerous man that lives next door, but it’s quite another to look them in the eye, especially when he only has one. In order to better understand the danger they face, and to decide how to deal with it, Rick needs this time with the Governor, and it builds a relationship between them that the fans want to see. It’s a satisfying and necessary episode.

This also gives a brilliant showcase for Morrissey and Lincoln, both terrific performers. The way Lincoln keeps it together, acting tough, even though he is faced by such a great threat, is wonderful. Morrissey flits around, his character trying on many faces, attempting to find a tact that will get through to the other man. So much is left unsaid, played out in facial expressions and movements, and it’s a triumph for the actors as much as the roles they play.

In the end, the Governor tells Rick he’ll leave the group alone if they hand over Michonne (Danai Gurira), whom took the Governor’s eye. It’s a lie, of course, but how can Rick be sure? If there’s even a small chance that giving him Michonne, which will mean certain death for the woman, will protect everyone else, it’s something Rick has to seriously consider. He has children to think about, as well as people he has known much longer than she’s been around.

Hershel (Scott Wilson) tells Rick that Michonne has saved their lives and has earned her place in the group, and Rick admits that Hershel is right, but still considers sacrificing her. This is where things get tough. Before last week’s episode, Rick probably would have been fine with the deal, not caring about Michonne. Now, though, he likes and values her. Plus, there are her practical skills and the protection she offers the group to consider. She would be sorely missed.

Giving Michonne to the Governor to die will cost Rick a piece of his soul. He is willing to do things that in a non-post-apocalyptic world, some would consider cruel. But leaving a hitchhiker on the side of the road and actively giving a woman to her enemy are two entirely different things. Rick would be making a conscious, preventable decision to let someone he knows be murdered. Her death would be on his hands.

The bottom line, though, is the Governor is not trustworthy. Rick needs to realize this, and also understand that giving up Michonne makes him weaker in the inevitable battle. If the Governor is going to attack them no matter what, and everything Rick knows about the man points to this, there is no sense giving into his demands, especially when said demands hurt Rick’s group as a whole. It’s a no-brainer, and whether Hershel succeeds in talking Rick out of it or it’s a decision the leader comes to on his own, Michonne must not be given to the Governor.

Andrea, for her part, has almost as tough a decision to make. Speaking with Hershel outside of the meeting, Andrea knows she is welcome back with the prison group and must choose sides. The issue is, Andrea hasn’t seen the Governor’s cruelty firsthand, and admitting he’s a monster also admits a failing on her part, as she has put her trust in him, even telling him about Rick’s baby and Shane. She still hopes things are just a misunderstanding between the two groups and can be peacefully resolved, as any other option is a failure, but it’s time for her to accept responsibility for her failure. Her decision to return to Woodbury at the end of the episode is as much about faith in own judgment as it is about faith in the Governor, and it’s the wrong choice to make. I just hope it’s a decision that doesn’t get her killed.

The end of “Arrow on the Doorpost” does give us some hope that the Governor can be stopped. Milton (Dallas Roberts) overhears the Governor tell Martinez (Jose Pablo Cantillo) to kill anyone in Rick’s group he can when they return to hand over Michonne or discuss tactics, and Milton clearly doesn’t approve. After all, he has a nice conversation with Hershel, and I can’t imagine Milton wants to see him, at least, die. Knowing Andrea’s connection to Rick and the others, Milton should definitely grow a spine and confide in her. It’s the only way to stop a slaughter.

It’s true that Andrea and Milton alone don’t stand a chance of accomplishing anything in Woodbury, especially since Milton is not a fighter. However, if Andrea can rally others to her side, perhaps Tyreese (Chad L. Coleman), then maybe something can be done.

Back at the prison, Merle (Michael Rooker) is not happy sitting by while Daryl (Norman Reedus) risks his life protecting Rick at the meet and wants to go after him. No one will help Merle, feeling that Merle will put the others in danger. This is not only a summation of Merle’s standing in the group, realized by the character himself when he can’t get even “outsider” Michonne to join him, but also the beginning of a new threat. Merle isn’t one to be put in his place easily, and if he senses that he has no power or respect here, he could react badly.

The unknown quantity is Merle’s affection for his brother, Daryl. Merle definitely cares about his kin, and Daryl is the reason Merle is at the prison in the first place. Will Daryl be able to keep Merle in line, or might Merle switch back to the Governor’s side at a crucial moment, hoping that a betrayal might be enough to earn him the Governor’s forgiveness, even though viewers at home are pretty sure by now that it won’t.

A touching scene in “Arrow on the Doorpost” is when Glenn (Steven Yeun) reconnects with Maggie (Lauren Cohan). They finally talk about their relationship and their feelings, since things have been strained between them ever since their captivity in Woodbury. It not only lets them work through the issues, but also reaffirms their love for one another. It’s a little unsettling that they leave the watch post to have sex, as that leaves the group in danger, but I guess in this wasteland of a world, you have to take it where you can get it, no? And it’s very nice to see them work things out.

“Arrow on the Doorpost” is an excellent installment, ripe with heavy drama and wonderful character development. There are some serious questions raised, and it puts everyone in an interesting holding pattern as we near the end of the season. How it will all shake out, and who will be among the bodies left on the floor, as there will surely be more major deaths by the finale, is anyone’s guess at this point.