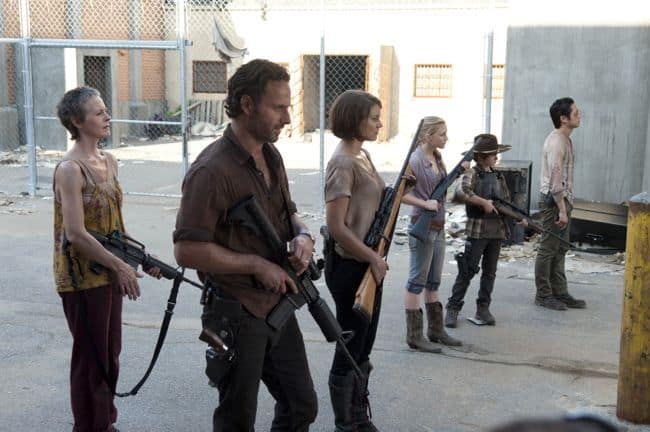 AMC’s THE WALKING DEAD is heavy on great character moments and one-on-one scenes in the latest episode, “I Ain’t a Judas.” The series works best when delving into the tough choices these people have to make in their current hellscape of a world, and we get plenty of that, as there are tough decisions to be made this week. Tensions are high, and they will soon break, one way or the other.

Andrea (Laurie Holden) pushes the Governor (David Morrissey) for more information about her friends staying at the prison, mad at him for lying to her about going to talk with them, and disturbed to learn that there has been a shootout between the two groups. The Governor tries to deflect and push blame off, but Andrea insists on talking to her comrades herself, assuming there has been a simple misunderstanding, and that peace can be brokered.

There is no misunderstanding, as she soon learns, told by the others the horrible things the Governor has done. She isn’t sure if she can believe them, being under the Governor’s spell, and treated hostilely by the people she considers friends, who have good reason to be suspicious of her, especially since she waits several days after learning about them to visit. But a day at the prison seems to convince her, even if it’s not enough to get her to execute the Governor in his sleep.

I feel bad for Andrea in “I Ain’t a Judas,” caught in a tough place. She hasn’t witnessed the Governor’s brutality first hand, and based on what he tells her, she’s getting two conflicting stories. As much as she cares for those she left Atlanta with, she has been absent from them for a long time, and the Governor offers her a chance at a real life, in a community of others.

Andrea sure knows how to pick bad men in THE WALKING DEAD, first Shane, then the Governor. As discussed on the after show, Talking Dead, it takes a certain amount of crazy to be a leader in this new way of life, as even Rick (Andrew Lincoln), the hero of the show, demonstrates. Andrea is attracted to that power, and somehow thinks that wisdom comes with it, blinding her to obvious flaws. It does make me wonder if the series will go the way of the comics, eventually landing Andrea in Rick’s bed, even if that almost makes her a cliché or a floozy, which she is neither.

I’m not entirely sure our protagonists have convinced Andrea that he’s evil, even if she seems to be in good standing with her again, convinced she isn’t siding against them. She pulls the knife on the Governor, but can’t bring herself to kill him. Does she doubt the truth of what her friends say? Does she just not have it in her to murder a (at the time) defenseless man? Is she wondering how the Governor’s death might effect Woodbury, and her standing in it? So many questions playing across her face that are not answered for us.

How about Carol (Melissa McBride) laying out the plan to screw and then assassinate the Governor? We don’t expect this from her, as hardened as she might be, and hopefully that helps Andrea see how serious the situation is.

Michonne (Danai Gurira) is the most hurt by Andrea’s behavior, and she has every reason to be. The two are alone together even longer than Andrea is with the others, and for Andrea to not believe Michonne, to turn her back on her companion, is rough. I do think Michonne’s words about the Governor are the ones that finally make Andrea see that something is up. But yet, she still hesitates. Doesn’t Andrea realize that taking out the Governor would repair this fragile relationship?

The one thing that is positive from this is that the Governor seems to trust Andrea. For her to return to him and sleep with him after talking to her friends convinces him that she hasn’t been swayed away. This could make a betrayal by her unexpected when she does finally muster up the gumption to act, as long as she can keep her behavior and face in check.

Unfortunately, Tyreese (Chad L. Coleman) and his gang end up in Woodbury at the end of “I Ain’t a Judas.” They see a little bit of crazy Rick at the prison, through not enough for Tyreese to want to fight him; too bad the same can’t be said for others in his group. However, the Governor is gearing up for a fight, and they need a way to earn their keep so that they can settle in a semi-safe place. It doesn’t reflect poorly on them, given their limited view of the situation, that they side with the Governor now. It’s just a shame. I hope this ends with Tyreese, a good guy, providing the inside man turning against the cruel dictator at a key moment.

I can’t decide if Milton (Dallas Roberts) has a chance at surviving this season of THE WALKING DEAD or not, or if I want him to. I really hoped that he’d go with Andrea to the prison and stay there, desperate to get out from under the Governor’s thumb. Milton is terrified of his boss, after all. But it seems that fear is so powerful, and his faith that the Governor will prevail so absolute, that he hesitates to switch sides. Maybe he can survive the coming confrontation, and Andrea can vouch he’s not bad, even if he is a coward?

Back at the prison, Hershel (Scott Wilson) yells at Rick, and Carl (Chandler Riggs) asks him to step down as leader. I think this one-two punch is enough to snap Rick out of his crazy, as he glimpses what could be a Lori slightly after Hershel’s words, but not again after Carl’s. For the rest of the episode, we see him stepping up, being the leader he is supposed to be, doing what he needs to for the group, including planning a scouting mission with Michonne.

Hopefully, the faith that the others have in Rick has not been shaken too badly. We know he’s a good man, and so do they, or they wouldn’t have put their trust in him in the first place. They see when he’s off the rails, and when he’s who he needs to be, and hopefully they also see the difference. Hershel and Daryl (Norman Reedus) seem to, content to take orders from Rick again in “I Ain’t a Judas.”

I do think Rick will get at least a brief chance to step away from being the leader, likely next season at some point. But he’s born to be in charge, and has qualities that few others possess. For the rest of the group, he must be strong.

It’s great that Rick sees Carl as a man. The Governor is right that adolescence is a twentieth century invention, and without the luxuries of the old way of life, there isn’t time for a teenager to act like a kid. Carl is conducting himself like a grown up, and Rick deciding to take him on the mission proves that his father, as protective as he might want to be with his son, realizes that Carl deserves to be included fully in the group.

I do wonder if Daryl really has a handle on Merle (Michael Rooker). Merle is playing nice for now, knowing he can’t go back to the Governor at this point, and this being the safest place for him, as well as where his brother is. But if Merle sees a chance to get back in the Governor’s good graces by doing harm to one of the group, especially Rick, I think he’ll jump at the chance. As I’ve said before, I just hope Daryl doesn’t have to be the one to personally put Merle down. Because Carol, the woman Daryl trusts most, warns him about Merle, I think Daryl is steeling himself for the possibility.

I am sure I missed some wonderful moment in the episode between two characters, there being so many to touch on. “I Ain’t a Judas” is a fine installment, giving us some words to ponder, some decisions to question, some cliffhangers to speculate on, and a few zombies bashed in the face to keep the action level up, even in a very personal episode. Fantastic job this week.