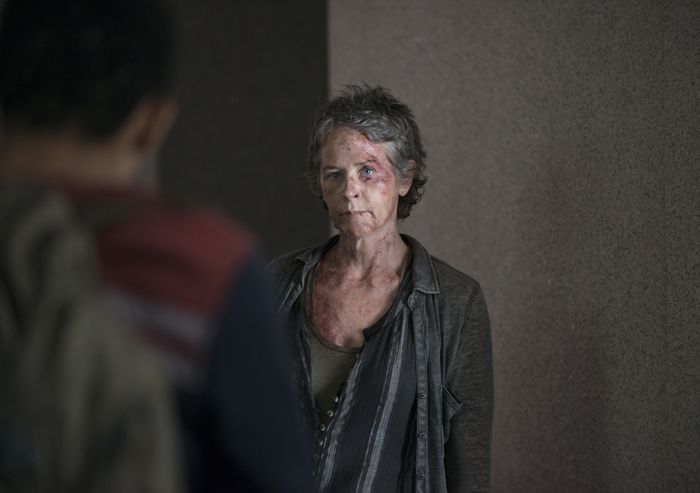 The title of this week’s episode of AMC’s THE WALKING DEAD is “Consumed.” This refers to the way fire consumes, metaphorically and literally. As Daryl (Norman Reedus) and Carol (Melissa McBridge) track the missing Beth, they reflect on how their old selves have been burned away, possibly multiple times, and whether they are phoenixes or ashes. We also see Carol remembering some actual fires, both ones alerting her to danger, and ones highlighting her own mistakes.

Carol has become a fan-favorite character, right up there with Daryl, for many good reasons. Her memories show Rick (Andrew Lincoln) burning the bridge with her, the people Carol murdered at the prison, Carol burying the girl she shoots, Carol rushing to save her friends at the prison and Terminus, and Carol considering fleeing again. These are all pivotal moments in her character’s journey over the past season or so, and by keeping them brief, THE WALKING DEAD does a good job of reminding us of them without hammering them in too hard.

Because of all of these things, Carol isn’t sure she wants or deserves to be a part of the group any more. She agonizes over decisions made. She is too close to the source, though, to see it clearly. The rest of us have a fuller picture of her, remembering everything she has done, who she was, and how far she has come, not just these glimpses. Daryl gives voice to our side of the story, telling Carol that she “ain’t ashes.” She is still a human being who is as deserving of love as anyone else.

Daryl has a similar arc, though less prevalent in “Consumed.” As Carol says, he has grown from a boy into a man, stepping up to do what must be done. Daryl obviously still has doubts about himself, unlike how he sees Carol, because he takes a book on abuse from the shelter they stay at. This clues us in to things Daryl has trouble saying out loud. But again, Carol gives voice to our thoughts when she reassures Daryl about who he is.

There are many things to love about THE WALKING DEAD, but these characters are at the top of the list. Not a lot happens in “Consumed,” but that’s just fine because it gives us time to examine these personalities a bit more closely. While circumstances have shaped everyone in different ways, such as Rick into a badass leader, it has made Carol and Daryl much more noble and worthy people than they would have been in the old world. It has stripped away their previous issues and given them a second chance. They are both using this new start well.

The fact that Daryl and Carol are hunting for Beth and helping each other at the same time proves this point. “Consumed” sees Daryl burning abused children Walkers for Carol and willing to go over a bridge in a van. Carol does the latter, too, willingly for a girl she hasn’t seen in awhile and probably owes nothing to. They are heroes, plain and simple.

“Consumed” also unites them with Noah (Tyler James Williams), who stalks them and steals their weapons. Had this been all we’d seen of Noah, it would be difficult to use him this way or know whether to trust him. Because we know he’s also working to save Beth, though, one hopes for him to get a chance to talk to the pair so they can discover their common ground and work together. Thankfully, THE WALKING DEAD finds a natural way to do this, as it would be all-too-easy to make it clunky.

Noah is one of the fastest characters audiences have come to trust, and Daryl has been semi-comfortable with, too. This unique ability he has to worm his way into hearts, surely helped along by excellent writing, makes him an individual to watch, and one I hope sticks around. Circumstances ally him with Daryl, but choice can make him part of the group.

“Consumed” brings us up to other points seen, where Daryl returns to camp and an injured Carol is brought into Beth’s hospital. This means, with two hours to go in this half season, we’re promised action and large-group stories. I like how the first half of the year has danced back and forth between those exciting times and these character focuses, striking a terrific balance in a show known for both.