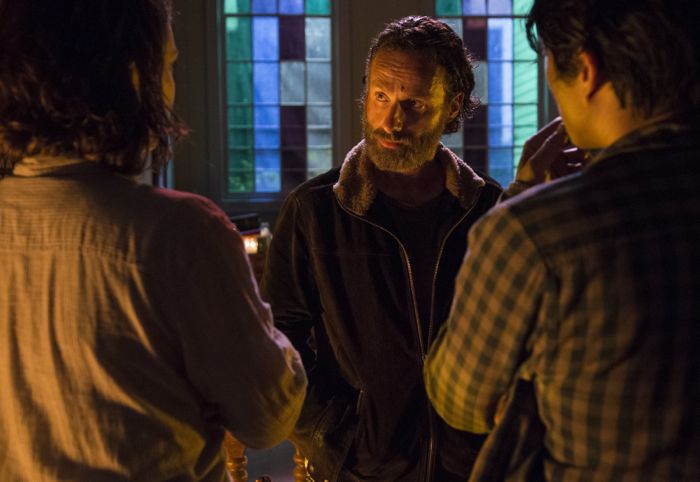 This week’s installment of AMC’s THE WALKING DEAD is an emotional rollercoaster. Much of the series deals with finding morality in a much-changed world, debating what values can be held onto and which must be dropped to survive. What defines a good person in this new age? It’s surely not the same as what modern viewers are used to. This most recent hour, “Four Walls and a Roof,” finds many characters struggling to find that line.

First, a quick recap of events: Bob (Lawrence Gilliard Jr.) delights in telling his kidnapper-cannibals that they have eaten tainted meat, revealing he has been bitten by a walker. Gareth (Andrew J. West) and the others are disgusted, but have a new plan. They drop Bob back at the church to enrage Rick (Andrew Lincoln) and the group, luring a strike force away from the main contingent. As soon as Rick et al. leave, Gareth and his men sneak in to finish off those left behind. But Rick is smarter than that and doubles back, brutally ending the Terminus survivors once and for all.

The scene in which Rick, Abraham (Michael Cudlitz), Michonne (Danai Gurira), and Sasha (Sonequa Martin-Green) savagely beat several of the Terminus guys to death, including Gareth, is stomach-turning. Fans might expect a triumphant moment of enemies being defeated, but that’s not what “Four Walls and a Roof” delivers. Instead, it’s an ugly side to these characters. Yes, Gareth and his followers are bad people and cannot be trusted to be set free again, so no one is arguing they don’t deserve to die. But the method of execution seems more cruel than necessary even if Rick’s excuse of not wanting to spend bullets makes sense, and there’s poetic justice in Rick fulfilling his promise to Gareth involving the red-handled machete.

Of course, this leaves hanging the question of if it’s safe to eat someone who has been bitten, with the diners dead before digestion completes.

Does this mean Rick and the others are bad people now? Even some of their friends look away in disgust, uncomfortable with what they are seeing. Yet, no one defects from Rick because of this. Everyone agrees it is necessary. This is where the line between right and wrong gets blurry, and one wonders if humanity can be held onto.

Bob provides that string of hope for the audience to keep liking our group. He tells Rick how awesome it is that Rick takes him in, making him a part of the family. Some other marauders are only looking out for themselves and would not allow anyone new to join them. Rick and his friends rescue Father Gabriel (Seth Gilliam) as recently as last week, proving they haven’t completely gone to the dark side. They only murder those who deserve it. Rick should keep looking for others to save.

One cannot say Gareth is redeemable. There is a certain charm to him, and his chilling oratory makes much more sense than it should. He is wronged in the past, and much of his killing is done to keep his people alive. The difference is, he slaughters those who have done nothing to him. And he is fine with using people and creeping them out in a sadistic manner, drawing an A on the church like the one on the train car in which he imprisoned the group. Gareth crosses the line of decency, and that’s why he must die.

In fact, we actually look down on the characters whom cannot kill someone like Gareth. Father Gabriel reveals his cowardice, hiding in the church as his parishioners are devoured, and that makes him pathetic and detested, not a man to look up to as he cannot kill even a walker. Tyreese (Chad L. Coleman) leaves a Terminus guy alive in a cabin, and that paints him in a poor light, even if he is able to spare Sasha the pain of taking Bob out, only proving he can kill walkers, not humans. Those who cannot step up the plate the way Rick does seem doomed to perish, sooner rather than later. Brutality, as hard to stomach as it is, is a necessary part of this world.

Still, without that scene in “Four Walls and a Roof” in which Bob tells Rick what a good man Rick is, Rick balancing his baby daughter on his hip, it would be hard for the heroes of THE WALKING DEAD to come back from this. There has to be good mixed in with the bad. Rick has to have a moral line about who is judged worthy of being put down, and we have to know he won’t do the same to whoever they meet next. Justified or not as killing Gareth’s band is, it’s hard to watch a good man do it, and that is part of why this series is the best drama on television.

The only thing that bothers me about this episode is when Abraham takes Eugene (Josh McDermitt) and Rosita (Christian Serratos), along with Glenn (Steven Yeun), Maggie (Lauren Cohan), and Tara (Alanna Masterson), off on their own. His goodbye to Rick is great. Glenn and Maggie’s decision to join up makes sense. But why can’t Abraham wait? It’s clear that Eugene wants to. The immediate threat of Gareth is gone, so there’s no rush to move on, right?

I guess Abraham is a man on a mission who suddenly feels his mission has been delayed too long. I get it; I really do. He is out to save the world. But the group would be so much stronger if he’d just give Daryl (Norman Reedus) and Carol (Melissa McBride) a day to get back. The fact that Daryl shows up soon after the others leave makes it all the more groan-worthy. It’s true that Abraham has no way of knowing the wait would be so short, but still…!

Speaking of Daryl, who is behind him in that final scene? If it’s Carol, why doesn’t she come out? Is it Beth (Emily Kinney) and a group of other captives Daryl has rescued? I want to know more about this right now!

“Four Walls and a Roof” is a fantastic episode, made all the better by setting it inside of a church, which is, as one character says, just “Four Walls and a Roof.” It really plays to the strengths of the series, and both significant deaths are affecting, in different ways. Seven days is a long wait for the next installment.

JANE THE VIRGIN Preview: Episode 3 Offers the Mystery of the Necklace and a Secret Rendezvous