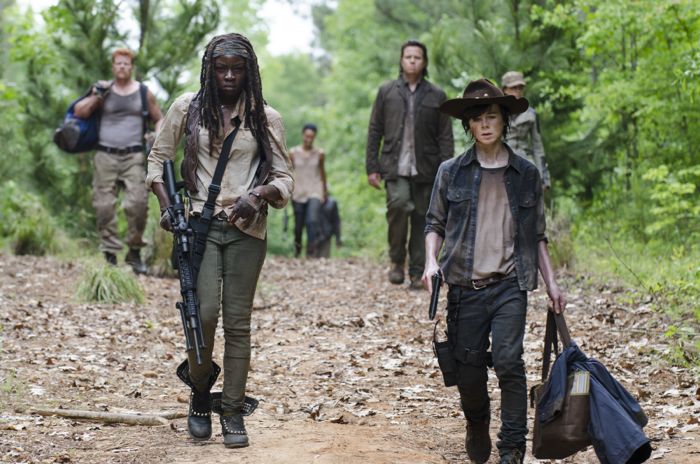 AMC’s THE WALKING DEAD has conditioned us to be wary of any new face, as the group has been burned so often by “Strangers” in this post-apocalyptic landscape. That’s why, even as our group comes together more solidly, viewers are likely be nervous around the new cast member introduced this week, Father Gabriel Stokes (Seth Gilliam, The Wire, Teen Wolf).

Fans of the comic book already know who Father Gabriel is, but that may not help them. While never yet introducing a comic villain as a hero or vice versa on TV, it’s bound to happen sooner or later, given the huge license the television writers take with the source material. Last night’s episode, “Strangers,” does a fine job of both introducing Father Gabriel, and making fans and characters alike suspicious of his intentions and back story. Could he really survive alone in the woods all this time? Why are there strange words written on the wall of the building? The car with the cross that kidnapped Beth (Emily Kinney) seems like it could easily be connected to him. These questions are not answered fully this week, but Gilliam already makes a strong impression with his memorable take on the character.

It’s pretty neat that our heroes still rescue Father Gabriel, despite what they’ve been through. Rick ignores a man Carl (Chandler Riggs) wants to help at the end of last season. Granted, that man is already being torn to bits and they likely couldn’t save him. But even after recently being badly betrayed by Terminus, they take a chance on this new guy, which is a sign their humanity remains intact, if skewed.

Rick’s “three question” test is usually a pretty good way to judge a person’s character, checking their attitude towards others. It doesn’t work on Father Gabriel. If he’s telling the truth, he hasn’t killed anyone, human or Walker. This makes him a very, very rare exception in a world where everyone kills to survive. Thus, he remains an enigma, which is an interesting new take for the story.

As Father Gabriel helps our people find food, the episode spends a lot of time smoothing out the dynamics of the group. The cast has spent quite awhile splintered, and only at the end of last week’s premiere, have they come back together again. This means no one knows that Carol (Melissa McBride) killed a girl. Rick (Andrew Lincoln) banished Carol previously; is that still a factor between them? Some may wonder why Tara (Alanna Masterson), who is seen with the Governor’s people, has joined them. Some characters have motivations that could pull them away from the rest. These are all burning questions that demand an answer.

“Strangers” starts giving us those answers, thankfully not making us wait weeks to deal with them. Rick and Carol have a lovely scene where Rick asks if they can all join Carol on the road. He doesn’t exactly apologize, but that is in the subtext of his words, and it’s obvious that he bears no grudge towards her. Can she get over the past and say the same? Well, the episode doesn’t tell us if Carol is mad or just no longer feels like part of the ensemble (it hints the latter), but she does try to sneak off on her own, so she isn’t fully integrated back in, at least not yet. Hopefully she will be soon.

Carol could be worried about what the others will think if they learn that she murdered a child. The only one that knows is Tyreese (Chad L. Coleman), who seems to have forgiven her, and has no desire to remember it, nor tell anyone. Carol’s guilt would be the only thing blocking her here, but that just might be enough to do her in, as she’s, at heart, a good person.

So Carol tries to flee, and of course it’s Daryl (Norman Reedus) that goes after her. They are besties, if not more, and it would suck to see them separated again. Daryl won’t be willing to leave the others behind, even for her, but he also isn’t going to let her go without a fight. Their side trip to rescue Beth when they see the cross car only forestalls this confrontation, but whether Carol chooses to stay or go, at least we can look forward to at least one more adventure together for the two of them.

Tara’s path is smoothed by the fact that she saves Glenn’s (Steven Yeun) life and he vouches for her. Everyone likes Glenn, so if he says she’s good people, they’ll accept her. End of story.

What’s weird is the love triangle that seems to be brewing between Tara, Glenn, and Maggie (Lauren Cohan), considering Tara likes girls but she’s eyeing Glenn. I guess maybe sexuality gets a little more fluid when the choices are so limited, and saving one’s life creates a bond that defies gender? Still, I can’t help but feel that this dynamic may end up like the version of Carol in the comics – a young woman who wants to insert herself into a couple (it was Rick and Lori on the page) just so she isn’t alone in the scary reality, which is an understandable emotion, but not one Maggie and Glenn are likely to be willing to help Tara satisfy (as Rick and Lori refused Carol).

Abraham (Michael Cudlitz) has a different problem than the others. He is accepted well enough, but he has a mission to complete: get Eugene (Josh McDermitt) to Washington D.C. to save the world. Most of the group is sympathetic, but now that they have in Rick the leader they’d always hoped for, they all defer to him and will stand by him. Thus, Abraham only has to convince one man, albeit a man who isn’t very optimistic about their outlook, making it a hard sell. Abraham is right to bide his time, waiting for a moment where Rick will be willing to consider it, and by doing so, Abraham gets what he wants. He’s a smart cookie.

Bob (Lawrence Gilliard Jr.) is the one with the cheery outlook on life in “Strangers.” He keeps spinning things positively, and always wants one more kiss from Sasha (Sonequa Martin-Green). As a fan of THE WALKING DEAD, this signals his demise to me. He isn’t killed this week, but when he’s captured and his leg is amputated by The Hunters (Gareth (Andrew J. West) and his fellow Terminus survivors finally being confirmed to be this group), it’s not a surprise. No one is allowed to be so happy on this show. Bob’s cheeriness is his undoing.

There is a twist hinted at in “Strangers” concerning Bob. Remember, he leaves the church on his own volition and is crying when they find him. I think he was bitten in the basement, which I kept expecting to be revealed, but never was. What happens to people who eat the flesh of a man turning into a Walker? I think we’ll soon find out.

So much unfolds in one short hour, and so much of it is rich, character-driven stuff. THE WALKING DEAD is an excellent show because it can balance these dramatic moments with the action scenes, and by doing this well, “Strangers” is an excellent entry for the series.