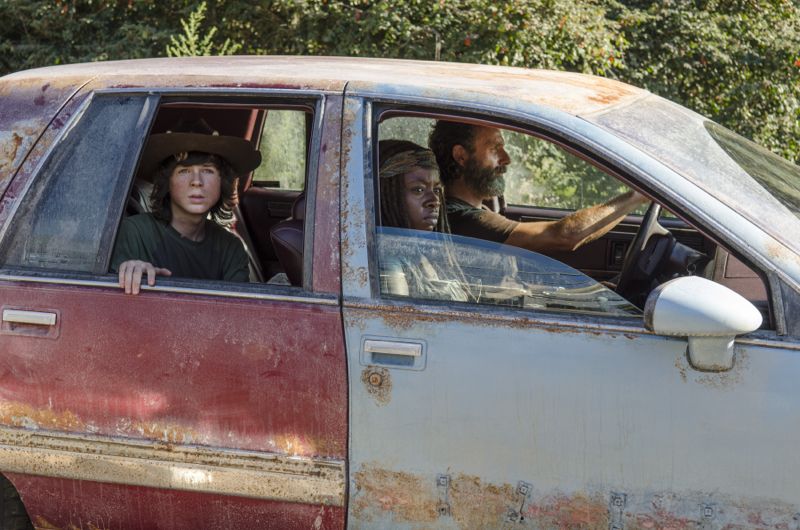 The survivors of AMC’s THE WALKING DEAD have gone “The Distance,” and now might they finally find rest? That’s the question posed at the conclusion of last night’s installment, but before the group gets there, they must first overcome the things they’ve relied upon to help them survive. That’s not easy, to be sure, but there are many hopeful signs that it can be done.

As “The Distance” opens, Aaron (Ross Marquand) is brought to the group. Rick (Andrew Lincoln) does not immediately welcome the stranger to their midst; quite the opposite, in fact, slugging him as Aaron tries to present his case. Aaron tells the group that he has come to recruit them for his settlement, but knows they will be skeptical of his offer. His approach is the best that can be made under the circumstances, likely usually delivered to smaller, more desperately wanting acceptance, people (though he should have just ate the applesauce without complaint, Rick’s demand and reason for it being obvious). When the little bits of proof he provides turn out to be true, he asks Rick what else it will take to convince him. Rick doesn’t have an answer.

Rick obviously can’t save everybody all the time, and the cast has suffered major losses along the way. But Rick is, by and large, the reason this many people have made it this long. He hasn’t always known what to do, going too easy on people for awhile, swinging to extreme Ricktatorship, and then swinging back the other way to peaceful farmer. But by the time they encounter Terminus, he is exactly the leader the group needs to survive out on the road.

Thankfully, Rick isn’t alone. Others around him have proven themselves in a variety of ways, as well as found ways to survive without him when everyone was separated. There isn’t anyone in this group who can’t hold their own any more, or has found a way to arrange protection, so Rick doesn’t have to be the sole decider, nor are they willing to let him be. Even while letting Rick be the figurehead, Michonne (Danai Gurira), Glenn (Steven Yeun), Carl (Chandler Riggs), beyond-the-grave Bob, and even Daryl (Norman Reedus) express support for following Aaron home. On the advice from his closest advisors, Rick has to at least give Aaron a chance.

Rick being Rick, he has to do things his way, though, and while that makes sense, it also causes mishaps, leading to the group losing a car and Glenn and Aaron almost getting eaten. Thankfully, they make it through this and Rick (and the viewer) finally start to have their doubts about Aaron’s honesty erased when we see him with his partner, Eric (Jordan Woods-Robinson, The Hunger Games: Mockingjay – Part 1). As Carl tells Rick late in “The Distance,” just because he’s wrong doesn’t mean he’s not right.

Thus, with Rick’s hackles somewhat calmed, the caravan reaches Alexandria, Aaron’s home, and this is where the most damning piece of evidence to support Aaron comes to light. Rick and Michonne discuss approaching Woodbury and approaching Terminus, and how they are met with silence at the gates both times. As the group gets to Alexandria, the sound of children playing drifts over the heavily-reinforced walls. This is the first place encountered that not only might kids be safe enough to be kids, but they are allowed to do so. It’s not a guarantee that all is well, but Rick risks walking in with his infant in his arms, and that’s saying something.

Can Rick lay down his weapons and be a member of a community? It’s hard to tell. Soliders, especially generals, do not usually easily adapt to peacetime. Rick is nothing if not a general, and he even does what he does at Terminus, leaving a backup firearm hidden outside the gate, though notably only one gun is in his stash this time. Rick shows signs of easing up, but it won’t be a quick or painless conversion. It’s just nice that he gets the opportunity to do so.

Not that Rick is the only one who won’t accept Alexandria at face value. Even Michonne, the most vocal supporter of going there, gets suspicious when she catches Aaron in a lie and makes him answer The Three Questions. His answers mean nothing by that point, a dramatically intense moment in the hour, more about revealing Michonne than Aaron.

This paragraph contains SPOILERS from the comic, so you may want to skip it. At this point in the written THE WALKING DEAD, the group settles into Alexandria where they still are, more than fifty issues later. This is a fundamental shift from survival mode to the rebuilding of civilization, a clearly divided two halves to the series. While their challenges are not over, they become part of something much larger than themselves for the first time. For this reason, I want to relax and appreciate the calm. However, THE WALKING DEAD television series has done such a good job of making me not trust anything and often deviates in ways large and small from the page. Because of this, I still feel like Rick, optimistic, but very cautiously so, as they enter the gated community. Whether the series follows the book or differs greatly, both offer many fascinating new possibilities.

“The Distance” is yet another excellent episode of THE WALKING DEAD. It has the obligatory action sequences and walker kills, but by and large, it’s a character piece. We learn something about ourselves and humanity in general while watching it, and that’s why, in an extremely competitive field, it has edged out all others as my favorite currently running television program.