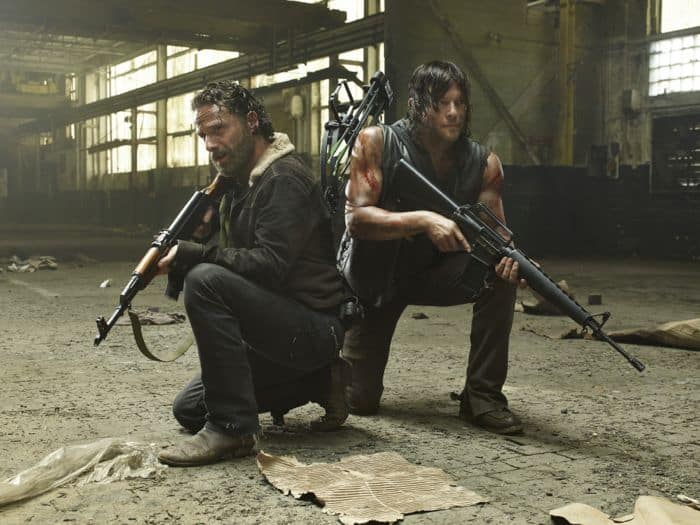 AMC’s THE WALKING DEAD spoiled much in their previously released trailers (too much if you ask me), but that did not detract from the excitement of last night’s season five premiere, “No Sanctuary.” When last we leave Rick (Andrew Lincoln) and the gang, they are trapped in a train car at the mercy of some wicked cannibals. To no one’s surprise, “No Sanctuary” is the story of how they escape from confinement and how Sanctuary falls. But there are a few unexpected things along the way.

The most surprising element of the episode to me are the flashbacks to Mary (Denise Crosby), Gareth (Andrew J. West), and the others trapped in their own train car. We learn from Mary, just before she becomes zombie chow, that Sanctuary’s mission used to be straight forward and as promised. Then, some jerks took over and raped and murdered the peaceful people. We don’t yet see how the group took back their home, but we now know what has hardened them.

West is a main character this season, which means there’s more story to tell here. Considering the glimpses THE WALKING DEAD gives us of Gareth’s past this week, it’s likely there will be more of these before he (SPOILER!) catches up with our heroes in the present timeline. I can’t say that I’m excited Gareth is sticking around, at least for now, but this is an arc I didn’t expect to see told, and so am intrigued by where it might go.

Is this along the same line the heroes struggle with, finding what is acceptable to survive and what one can live with doing? Gareth is logical and cold, but not overly cruel, unlike The Governor. He’s dispassionate about what he does to his prisoners, and so perhaps can eventually be forgiven, as he’s probably just trying to keep those he cares about safe and fed. Maybe he’s not as much of a monster as he first appears to be.

At the start of the episode, Rick and the others prepare to escape their car, making homemade weapons. This is the confrontation many have been waiting for all summer, a brutal, hand-to-hand scuffle with crude tools. But it doesn’t come. Gareth is too smart for that and drops a gas canister in from the ceiling, taking only four of them out to the slaughter house and not giving the others a chance to fight back.

This leads to a very tense scene in which one or more of our core people could die. There is a moment where it looks like Glenn (Steven Yeun), at least, will bite it, and I found myself racking my brain for memories of the trailer. Is Glenn shown in it? I thought so, but I started to have doubts. THE WALKING DEAD expertly puts our people in these situations where one wonders how it can possibly work out, and many times, it doesn’t, so the suspense is real and it’s hard to trust that the writers will keep our favorites alive.

In fact, there are no casualties among the group in the escape from Terminus. This is acceptable because of the way everything plays out. Rick is able to cut his bonds and free his friends. Carol (Melissa McBride) causes chaos from the outside. Many of Gareth’s people are taken by surprise and slaughtered by Rick and company or by the Walkers that invade. Only in a frantic situation such as this, could our people, single-mindedly focused on fleeing, survive without losing anyone.

“No Sanctuary” also takes time for a bit of character development. Rick really wants to go back and wipe out any remnants of Terminus out of revenge. Everyone else disagrees, but he is adamant. That is, until he sees baby Judith. Then, his human side comes out again. Rick has to turn himself into a monster to protect everyone, but his reaction at being reunited with his infant proves there’s still a compassionate side to him, as does the way he hugs Carol, whom he once banished.

Carol has definitely earned her place back with everyone else. At the start of “No Sanctuary,” she tells Tyreese (Chad L. Coleman) she won’t be staying when they catch up to the group. Yet, there is no sense that she’s leaving at the end. I think Rick’s warm welcome and Daryl’s (Norman Reedus) sweet excitement have changed her mind and let her know she belongs with them. It would be hard to lose her again, one of the best characters on the show, resourceful, caring, and a realist.

Tyreese is the anti-Rick this week. While Rick is seemingly monster until he’s not, Tyreese looks like a wimp. He doesn’t want to kill anyone and allows himself to be baited by the Terminus man he and Carol capture in the woods. This is a beaten Tyreese, one who regrets past actions. But like the captive says, if Tyreese can’t tap into his inner killer, he’s doomed to die. In the end, Tyreese finds the tough side of himself, which comes out so he can protect Judith, the most noble of causes. Thank goodness Tyreese has not been permanently neutered.

Now, everyone is off to the next place. Will it be to D.C., where Eugene (Josh McDermitt) certainly seems prepared to wipe out the Walkers? (Fans of the comic book have reason to doubt him, but the show sometimes chooses its own path, so who knows?) Or will they go somewhere else? And what is Abraham (Michale Cudlitz) hesitant to talk to Rick about?

But wait! If you sit through the entire ending credits, so it appears the episode is done, we get one more surprise: Morgan (Lennie James) is following the group! In the comics, he rejoins Rick and the others after the prison and stays. Might THE WALKING DEAD finally be bringing this fan-favorite, who appears in the pilot and a single season three episode, back in a big way? Show runner Scott Gimple promises the brief glimpse is the start of something, but Morgan’s return is a well-kept secret and no one seems in a hurry to tell us what it might mean going forward.

My only complaint about this is that it’s likely many viewers missed it entirely. We’re used to sitting through the end credits of Marvel movies and such for a stinger, but not so for a television show. It’s a cool precedent, and one THE WALKING DEAD probably won’t use often, as seldom is the payoff worth it like it is in “No Sanctuary.” Hopefully, those that missed it will hear and catch it online. It gives us yet another reason to stick around and watch TALKING DEAD, to ensure we don’t miss anything.

“No Sanctuary” is a terrific return. It’s action-packed, full of great character moments, and contains a number of surprises that even the most ardent fans won’t see coming. The show delivers this sort of installment consistently, and that is why THE WALKING DEAD is my favorite series currently on television, despite much stiff competition.