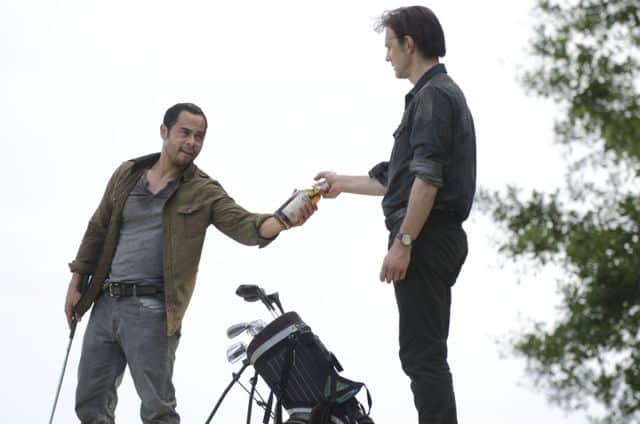 “Dead Weight,” the lastest episode of AMC’s THE WALKING DEAD, once more changes all the rules. As it begins, Brian, a.k.a. the man formerly known as The Governor (David Morrissey), is accepted into a new camp. He tries to make a go of things as a contributor who does not seek power or control. But when it becomes apparent that the leadership of this group is unstable and Brian’s new family is threatened, he allows himself to once more be a survivor.

At first, it appears there could be peace and balance in this group. Brian just wants to make sure Lilly (Audrey Marie Anderson) and Meghan (Meyrick Murphy) are safe, and he’s fine with falling in line behind Martinez (Jose Pablo Cantillo) if Martinez can do the job. It’s not an ideal life, with a leaky trailer, but for now, Lilly is happy and Brian can stand it.

But Martinez asks for more. First, he takes Brian with him out on raids. Then he makes him part of his circle of advisors. Then he tells Brian they should share power. This makes sense to Martinez, who abandons The Governor when he lost focus and became a bit crazy, but who respects what The Governor built in Woodbury. Assuming that Brian has the talents of The Governor, but has found a way to get right in the head again, of course Martinez wants to make use of that skill set.

This is something that cannot stand for Brian, who whacks Martinez in the head with a golf club and feeds him to a pit of Walkers. There can definitely be some debate about why Brian does this. Is he just avoiding the power that he found so addictive and corrupting, and knows Martinez, who places emphasis on contribution, won’t leave him be? Does he give in to a fit of rage when he considers Martinez’s offer and thinks about what that might lead to? Or does Brian consider Martinez stupid and unworthy of leadership because he trusts someone who did not do right by the last settlement?

Either way, Martinez is dead, and that leaves a power vacuum. There are two obvious contenders to replace Martinez, not counting Brian, who doesn’t admit to the killing or immediately step forward. Pete (Enver Gjokaj, Dollhouse) is levelheaded and compassionate, refusing to rob another camp of their supplies. His brother, Mitch (Kirk Acevedo, Fringe), it a hothead, who thinks they should take what they can, anyone else be damned. Neither is a great pick.

Brian’s first solution to resolving this mess is, surprisingly, to run. He packs up Meghan, Lilly, her sister Tara (Alanna Masterson), and Tara’s new girlfriend, Alisha (Juliana Harkavy, Dolphin Tale), into a truck and tries to run. The way out is blocked by a mud trap full of Walkers, and so they are forced to turn around and go back.

I think Brian’s decision to flee is actually a testament to just how much he wants to be a different man. He could easily wrest control of these people himself and put down the threat, but instead, he decides to go away. He desperately wants to protect these women and not repeat Woodbury if he can avoid it.

Now, yes, Brian could try to escape harder. He might have found an alternate route or another opportunity. He does give up before the end of “Dead Weight,” so doesn’t have full commitment to this course of action. But part of this could be that the girls don’t support escaping, believing things safe. And part of it could also be that once Meghan is attacked by a Walker in the camp, Brian decides he cannot wait any longer to take action, and so chooses the quickest resolution.

This is a return of The Governor. He’s cold again, and murderous. He stabs Pete and puts him in a lake where The Governor can visit him, a la the fish tanks from Woodbury. The Governor threatens Mitch and gets him in line, his new attack dog, like Martinez used to be. And he starts thinking of ways to bring the group together to ensure their survival, knowing that a few trailers and some barbed wire just will not do. After all, he’s got some recent examples to prove this, seeing two other settlements slaughtered earlier in the installment.

Again, The Governor thinks of a swift way to meet this goal. Woodbury is destroyed, and so he sets his sights (or sight, since he has only on eye?) on the prison where Rick (Andrew Lincoln) and the others live. This allows him to simultaneously work towards two goals. One, if he succeeds, he’ll have a new environment that has proven a safe haven over quite a period of time from the Walkers and other marauding gangs. Two, he will finally get his revenge on those that wronged him, which he clearly still craves, unable to resist pointing his gun at a distant Michonne (Danai Gurira).

Can he succeed? He’s very good at persuasion, so I have no doubt that he can talk his new “friends” into following him. Mitch, Tara, Alisha, and others in the new group have military training. They also have a tank. These are important tools to lay siege to an entrenched enemy, and it gives them a chance. Should things roughly follow the comic book (which actually found Woodbury residents attacking the prison, not these other people), The Governor will fail and all of his followers will die in the process, taking many of Rick’s people with them. This could be a heck of an action-packed, exciting finale.

The one thing to consider, though, is that The Governor does have two people he cares about and wants to protect. Is he willing to go in guns blazing with Lilly and Meghan’s lives on the line? Will he try to leave them somewhere safe, and sacrifice someone who could be a good soldier to watch over them? Or will his rage and the necessity of being in command override those protectionist instincts, and he’ll think about them again only after he has the prison?

“Dead Weight” is a great, solid episode, and definitely negating many of the musings I put forth in last week’s review. Somehow, the writers keep finding unexpected ways to take the story in that feel authentic to the characters and tell one heck of a tale. Whatever they have planned for next week, I’m sure it’ll be amazing.

THE WALKING DEAD completes its fall run next Sunday at 9 p.m. ET on AMC.