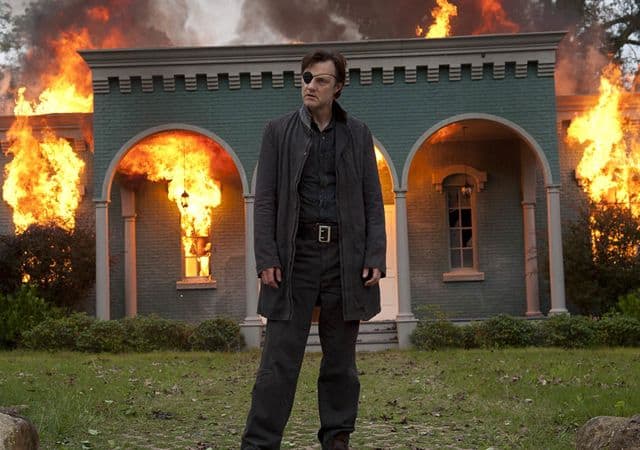 AMC’s THE WALKING DEAD hits the pause button on most of its main cast this week in “Live Bait,” instead backtracking to catch us up on what The Governor (David Morrissey) has been doing. The hour, which features several new characters, and is very loosely based on events from the novel Rise of the Governor (though that story predates The Governor running Woodbury, while this episode definitely does not), also does not bring us all the way up to the present. Which means we can expect more Governor goodness next week.

If any character were to get two consecutive episodes on their own, totally apart from everyone else, The Governor is the absolute best choice for this role. He is complex, and Morrissey chews up every scene he’s in, making him terrific to watch. Plus, this is somebody who plays a main role in the show and has sat out the past five episodes, so he needs some serious screen time to make up for his absence.

I’m glad that THE WALKING DEAD chooses to separate The Governor’s tale, rather than integrating it into other episodes. For one thing, “Live Bait” appears to cover some of the time between seasons, a period in which we didn’t see any other person’s plot, as the prison group skipped a long period of time. For another, it’s a stand-alone journey, more effective to be shown by itself and all at once, rather than broken into pieces stuck in multiple installments. THE WALKING DEAD is brave to make such a bold move, and it should pay off.

“Live Bait” picks up shortly after The Governor massacres his people. He is quickly abandoned by Martinez (Jose Pablo Cantillo) and Shumpert (Travis Love), who see his instability when The Governor won’t even move as a Walker approaches. And whom can blame them? Someone so reckless in this world will be a liability, not a help, and The Governor is both dangerous and unpredictable.

After wandering around on his own for awhile, The Governor encounters a family holed up in an apartment and introduces himself as ‘Brian,’ fibbing about his past. Dad Don (Danny Vinson, The Curious Case of Benjamin Button) is ailing and being cared for by his two adult daughters, Tara (Alanna Masterson, First Day), a lesbian cop, sort of, and Lily (Audrey Marie Anderson, The Unit), a single mother. The Governor plans to stay only for a short time, but lingers as he sees a lot of his own deceased child, Penny, in Lily’s girl, Megan (Meyrick Murphy, Jingle Belle).

The connection The Governor makes with Megan is a very important one for this man. Here is someone barely hanging onto life who shuns everyone, but a little girl can get through to him. Penny represents the part of The Governor that was human and good. Megan brings this back to the forefront. This version of the Governor, even as only a surrogate father, is sweet and protective, putting his life on the line for others, as he does when restocking Don’s oxygen.

And we get to see vulnerability. As The Governor stares at, then burns, a picture of his family, leaving the past behind him, he is also embracing a new group. A chess game with Megan references The Governor’s past, but it also makes him less threatening in how he interacts with the child, and how she sees him, an eyepatched-king. This is moving, emotional stuff, and Morrissey slays it as effectively as his character handles Walkers.

I guess it’s time for The Governor to change. As a villain, he went about as far as he could, brutalizing those who did not deserve it and murdering his own people. Sure, he could have gone out in a blaze of glory, trying to take as many of Rick’s people with him as he could in the process, as he did in the comics, but this is a far more compelling direction to take. Now we have someone who, maybe doesn’t seek to make up for past wrongs, but, is ready to move on. After everything he has done, can he?

With Megan, Lily, and Tara, he can. They don’t know his history, and so only see him as the guy who has helped the family stay safe. Tara even engages in a sexual relationship with him. One can’t blame these women for falling under The Governor’s charms, especially when they have no evidence telling them anything different, as plenty of people who did see him for who he was followed him, too.

But, this being THE WALKING DEAD, The Governor doesn’t just get to sail off into the sunset with a happy ending. Instead, after having to put down the Walker version of Don, The Governor and the girls set out to find a new home, are attacked by Walkers, and end up encountering Martinez.

This casts the scene of The Governor standing outside the prison, glimpsed last week, in a new light. Assuming he can convince Martinez to keep his mouth shut, something that seems likely based on the preview for next week’s episode and their past, The Governor may be there to ask Rick for help in protecting his new family, rather than to kill everyone. Or, should tragedy befall The Governor’s new group, I guess it’s conceivable that he renews his vendetta.

I hope it’s the former. Revenge is possible, perhaps, but how cool would it be to see The Governor join the group in some capacity? Or at least try to. Obviously, this would not be easy, but given the right set of circumstances, it may be possible, and it would certainly alter the dynamics in a major way. At least until he or Michonne makes a misstep and one of them tries to kill the other.