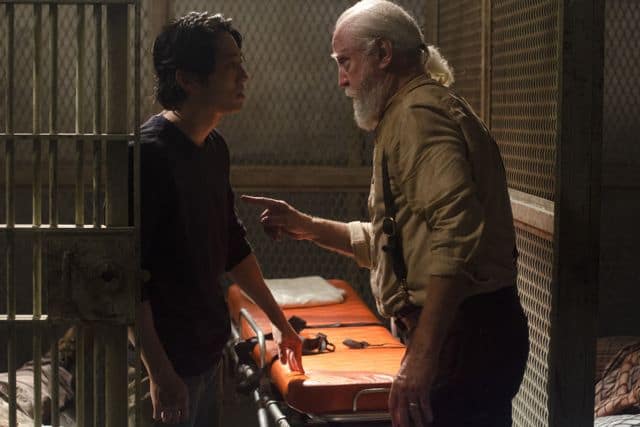 This week’s THE WALKING DEAD, “Internment,” takes place in the prison. The illness is growing worse, with more victims succumbing. Hershel (Scott Wilson) is steadfast in caring for his charges, but it’s clear there will soon be nothing more he can do for them if they can’t get medicine.

On one hand, not a lot happens with the Hershel story. There are several scenes of him helping others, and then some of the sick turn into Walkers and he fights them. This is exactly what one would expect to happen in the situation, and it’s not exactly moving forward from what we’ve already seen.

On the other hand, there is definitely an emotional journey for Hershel. He is the one in the group that has hope and faith, even as no one else holds on to such things any more. Yet, near the end of “Internment,” he can’t look at his bible. The things he has to do, stabbing the people he’s been taking care of, and watching Glenn (Steven Yeun), someone he’s close to, at the edge of death, changes him a bit. Hershel is still a force for lifting up spirits, but his mettle is definitely tested.

As valuable as Hershel is for morale, some may have counted him out in a physical confrontation, considering he is older and now has an artificial leg. But in this episode, Hershel proves he’s still capable on this front, too, fighting Walkers and saving lives. Near the end, Michonne (Danai Gurira) acknowledges this, inviting him to go outside with her, and he gratefully accepts. He’s got a new confidence in himself, and others see him differently, too.

Basically, Wilson kills it this week, and deserves tons of praise for his terrific performance, shining as the focus moves onto him.

Thankfully, no one super important dies in this episode. Dr. S. (Sunkrish Bala) is a loss, to be sure, but he’s not a long-term, central character. It would have been disappointing to lose Glenn in such a way, and Lizzie (Brighton Sharbino) is quickly becoming a player to watch, so I’m glad they both survive. THE WALKING DEAD is burning through all the expendable people at the prison, but they’re avoiding getting rid of any of the major cast yet.

Maggie (Lauren Cohan) is her father’s daughter. It’s not always obvious, but in this installment she wants to be a caretaker, too, and we see her attitude mirror his when she finally gets into the ward and helps out.

This type of relationship is echoed in Carl (Chandler Riggs) and Rick (Andrew Lincoln), whom we see eat peas out of the same pod, clearly a metaphor for what they are. The Walkers bust through the fence in “Internment” and father and son must work together to take out the herd. For the first time, truly, Rick treats Carl like a man, someone who can be counted on to hold his own and be a fully participating member of the group, and Carl rises to the occasion, as his father surely would.

This is something Rick has struggled with, for good reason. Carl is still a child, according to the old world order, and Rick has definitely had to help shape Carl’s morals and values recently, as those are still developing. However, Carl is also big and strong enough to hold a weapon, and is fully capable of mowing down dozens of Walkers, as he proves side by side with Rick. There is some rewarding payoff here to see that noticed and respected.

How long will the prison remain a safe haven? The Walkers keep pressing at the fence, and no matter how often the group clears the clumps of them at the gate, they always return stronger, and make it a little further each time, this week getting inside the barriers. It’s true that medicine has arrived so the group’s number of healthy people will swell again, giving them more bodies to help keep the defenses up. Yet, I can’t help but feel that won’t be enough, as greater and greater numbers approach. We saw the giant hoard Michonne and the others encountered on the road; the fences would never last against a mass that size.

We finally get a glimpse of The Governor (David Morrissey) in “Internment,” just staring at the prison. Is he coming to attack? Has he already been attacking, perhaps leading those groups of Walkers to the walls and testing the prison’s defenses? If so, why didn’t he notice the vulnerability of the ailment, with less people out working in the yards and the healthy adults going out for supplies, and strike then? He could easily have killed everyone left at that point.

The Governor is a fantastic villain, extremely dangerous and intelligent. Even if we don’t know what he’s been doing or what his next move will be, he still sends shivers down the spine. He is a cold, cold man who definitely wants revenge on Michonne and Rick for tearing down is world. Whatever he does next, it will not be signing a peace treaty or leaving them in peace.

“Interment” is a little slower than the past couple of hours, but it definitely has the ‘calm before the storm’ feel, and it would not be surprising if the final three installments of the fall run are fast and intense. I’m glad the series takes time to explore characters such as Hershel in depth before it doesn’t have time to do so anymore. This was another great episode.