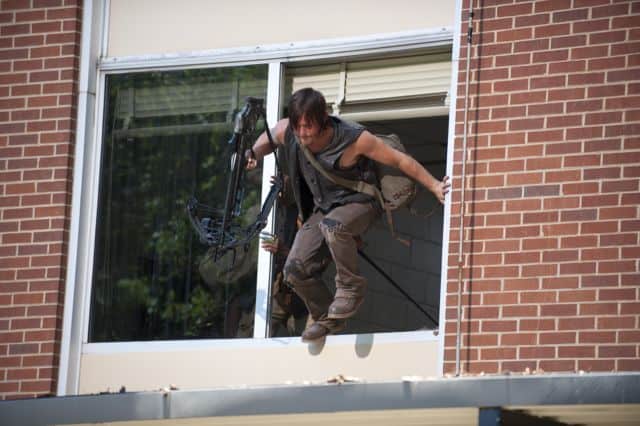 AMC’s THE WALKING DEAD presented “Indifference” last night, marking the halfway point of the fall run. The hour splits itself between two small groups away from the prison walls, and spends as much time dwelling on personal failings and doubts as it does fighting walkers. Life in the post-apocalyptic, zombie-run world is hard, and not everyone agrees on how to handle it.

Carol (Melissa McBride) is in a much larger role in season four, seen stepping up as a leader and making some tough decisions. She kills Karen and David to try to stop an infection from spreading, she secretly teaches the children in the group how to wield a knife, and she takes over the care of two orphan girls, whom she does not allow to call her mom.

For this, especially the first two reasons, Rick (Andrew Lincoln) decides she must be banished from the group. He takes her away from the prison walls, and, after collecting supplies, sends her on her way alone. Rick doesn’t trust her any longer, and knows she can be cold and calculating, so doesn’t want her around his children.

Is Carol right, though? When we meet her, she is timid, an abused spouse. We’ve seen her grow and adapt, and the person she has become is strong and able to handle this world. Her insistence that Lizzie (Brighton Sharbino) not call her ‘mom’ protects them both, as Carol knows one must be able to set aside personal feelings, having already lost her natural daughter. She has prepared herself to cope, and wants to extend what she’s learned to the impressionable youths to help them survive.

We see this very clearly when Rick and Carol encounter two survivors. They seem harmless enough towards others, so Rick invites them to come back to the prison. Carol has her doubts about their ability to defend themselves and others, though, seeing them as a liability, and so puts them through a sort of test, encouraging them to split up and help collect the rations. The newcomers are only too eager to earn their place, but it’s a wonder they’ve survived this long, and neither make it back to the rendezvous.

Carol knows there are enough helpless members of their group, and that if someone wants to join, they should be able to contribute, not just be dependents. She tests them, and they fall short. This is a logical thing to do, though one that is not warm or humane. Carol doesn’t seem upset when they don’t return; if they can’t even gather a few supplies, how are they to help protect the group?

Rick has become soft. There was a time he would have done the same as Carol. He used to think the group didn’t need to expand, and would only join with those who could put them in a better position. Carol reminds Rick in “Indifference” that he, too, killed a member of their own when the whole group was threatened. Carol and Rick have swapped places, in terms of personalities, and perhaps that is why Rick, seeing the parts of himself he’s tried to get rid of in her, abandons Carol.

I don’t think Carol is finished on THE WALKING DEAD. It may save her from a very angry Tyreese (Chad L. Coleman), to be far away when he finds out that she murdered his girlfriend. But Daryl (Norman Reedus) certainly won’t just accept Rick’s decision, as Daryl and Carol have a real bond. Daryl may go out to find Carol. Or, Carol may just know she’s needed at the prison and that the others will likely support her presence and so may come home on her own, with or without Rick’s permission. Plus, it would be much harder for her to be by herself, and her self-preservation instinct could seek the relative safety of the fences and walls again.

I do think the rest of the contingent would not only allow Carol back in, but chastise Rick for sending her away. It’s Rick’s own personal preferences that spark his decision, not an actual consideration of everyone’s welfare. The rest like Carol, and although Tyreese has legitimate beef, and others may want Carol to answer for the knife lessons and cease them, putting her under closer scrutiny, they also value her and have been with her awhile. I could be wrong, but I don’t think this is the point Carol will be dropped from the cast, though she could be MIA for an installment of two.

The other group out getting supplies consists of four people, three of which are wrestling with their inner demons. Bob (Lawrence Gilliard Jr.) still hasn’t kicked his alcoholism, Michonne (Danai Gurira) doesn’t want to give up searching for the long-cold trail of the Governor, and Tyreese is allowing his anger issues to endanger others. It’s not the most stable quartet assembled, though they are capable enough of escaping from Walkers, as they have ample opportunity to demonstrate in “Indifference.”

The difference between Michonne’s issue and that of the men is that she doesn’t really hurt anyone else when she sets off by herself. She is made to admit that her hunt is a fruitless vendetta, and she would better serve the group by hanging around home, and so gives up her mission. But her continuing to go out doesn’t really affect anyone else much because she doesn’t drag them with her or put them in harm’s way.

Bob, on the other hand, won’t let go of a bag that contains liquor, even as Walkers pull on it, causing his companions to risk their necks trying to help retrieve him and, by extension, the booze. Daryl won’t put up with that, getting in Bob’s face and telling him how it is. Daryl is plenty sympathetic to Bob about the things he can’t control, but Daryl sees the alcohol as something Bob should be able to handle. Let’s hope Daryl scares Bob straight enough for now, though Bob does still hang onto the bottle, and Daryl allows Bob the freedom to make the choice himself… for now.

Tyreese also screws up. He’s not listening to anyone else, and he lets the rage control him, even as Walkers attack through some vines. This isn’t the behavior of a healthy, sane man. He has plenty of legitimate reasons for his negative emotions, but if he can’t get them under control, he poses a danger as a wild card, one who cannot be tamed or trusted. Tyreese either has to suck it up and reign himself in, or he won’t be long for the cast.

“Indifference” is a really interesting episode, and the title can be taken a number of ways. Whether it is “Indifference” towards strangers one encounters, or “Indifference” towards one’s friends in giving into selfish urges. This hour is very character-driven, and it’s gratifying to see how various people deal with their bleak world, and how that may clash with others. It’s a time to learn about personalities, which, after all, is what the series does best.