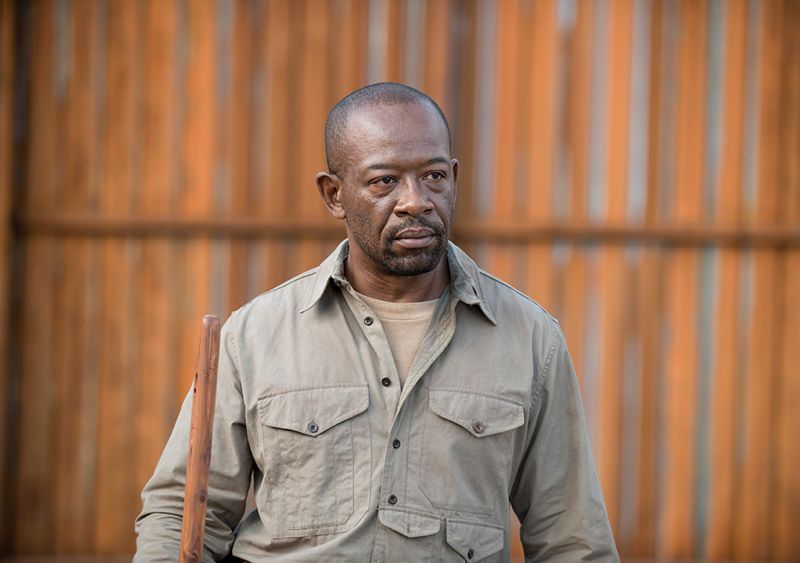 “JSS,” the title of this week’s installment of THE WALKING DEAD on AMC, stands for ‘just survive somehow.’ This seems an apropos title when The Wolves attack Alexandria and lots of people are dying left and right. The world in which this series takes place in is very, very dangerous, and all anyone can be expected to do is to try to stay alive. Unfortunately, that is much easier said than done.

“JSS” begins with a girl in a vehicle with her parents. It’s Enid (Katelyn Nacon), whom we’ve seen living in Alexandria. As the next few minutes pass, viewers witness how Enid loses her parents, survives on her own, and eventually makes her way to the settlement. It’s a brief character profile that certainly tells us more about the girl, how she has toughened herself in order to stay alive, which is also why she has trouble getting close to anyone, trying to avoid going through that pain of loss again.

It’s not unusual for THE WALKING DEAD to begin quietly, even after a cliffhanger like the one in last week’s season premiere. What is unusual is that the cliffhanger is not picked back up upon during the hour. One could argue the horn honk is to let us know about the attack on Alexandria, and it does. But it also turns an entire hoard of walkers towards the safe zone, and “JSS” doesn’t show us what happens with that yet. It’s basically a real-time event that takes place during the season premiere.

THE WALKING DEAD is terrific at teasing and drawing things out. It will eventually give us a satisfying resolution to the huge action sequence promised, but it will not be rushed in getting there. There is more story that needs to be covered first, and the show is structured in such a way as to expertly build drama until it can be built no more. It may be frustrating for some viewers to have to wait until episode three to get a promised battle between humans and zombies, but given just how good “JSS” and “First Time Again” are, I feel like there’s no room for complaint. Anticipation only continues to build, and the events of “JSS” leave our heroes much less prepared to deal with the coming zombies.

“JSS” sees The Wolves attack Alexandria, and as Rick (Andrew Lincoln) predicted, the people who have been living behind the walls don’t know how to defend themselves. Most of our main contingent is away, as we see in the premiere. It’s basically left to Carol (Melissa McBride), Morgan (Lennie James), Rosita (Christian Serratos), and Aaron (Ross Marquand), who isn’t one of Rick’s group, but has spent a lot of time in the outside world, to defend everyone else from a band of armed marauders. This isn’t a large force, but thanks to their experience and smarts, they are able to do so.

Now, not every Alexandrian is helpless. Jessie (Alexandra Breckenridge) does take out one woman when her family is threatened. This is clearly because of Rick’s influence, since she previously couldn’t bring herself to stand up to an abusive husband. Now, though, she’s growing quickly, and finally seems prepared to contribute.

But a lot of other Alexandrians lose their lives. Mrs. Neudermeyer (Susie Spear Purcell) is one of the first to go. Olivia (Ann Mahoney) and Denise (Merritt Wever) cower in fear, content to let others do the work for them. Spencer (Austin Nichols) helps from his tower, but then doesn’t directly counter attack on the ground.

Now, Rick has a plan, and he will be helping them get better at surviving. Some, like Father Gabriel (Seth Gilliam), are willing to learn, thankfully. Others are not so eager. As THE WALKING DEAD has shown us, those who do not step up and become capable of defending themselves will die. So it seems the community could end up being mostly Rick’s group when this is all over.

Morgan is a big question mark, though. He clearly abhors violence, and tries to only disarm The Wolves, not kill them. Is this an attitude that will work for him? He encounters The Wolves prior to this, and if he had killed the two he ran into then, at least the attacking group would have been slightly smaller. Can he really afford mercy in this day and age? I have serious doubts that he can, and he’ll either have to adapt or put the group at risk.

Thankfully, we’ll always have Carol. Her cover as a timid housewife may be blown, at least with Olivia, and she’s not able to save everyone, but she does a lot, arguably more than anyone, to defend the place. Carol is highly capable, and a good example of what Jessie might become in time, their histories being so similar. Yet, Carol isn’t cold, either, much as she might appear to be, as we see her holding a dying neighbor in her arms. Carol has found the right balance, just like Rick, that is needed in this world.

“JSS” ends with Enid running off. Will she be back? She is the one that tells Carl (Chandler Riggs) to just survive somehow, and that is certainly easier to do in a group, especially with some of the strong people around to help protect her. She’s a capable girl, but I hope she changes her mind before she becomes walker food. She definitely isn’t the only Alexandrian that needs help.