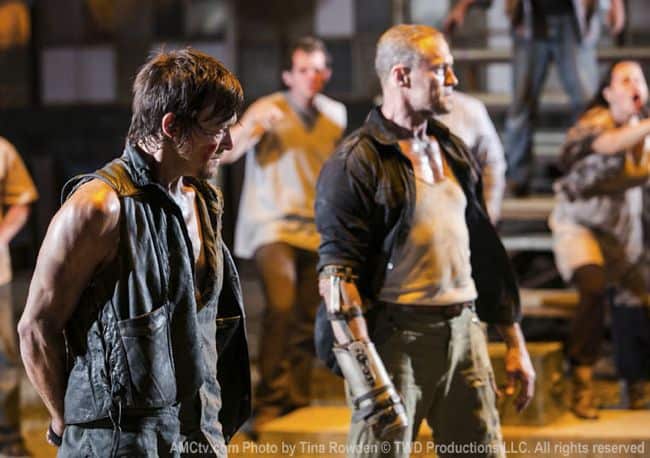 Last night, AMC’s mid-season three premiere of “The Walking Dead” returned with its largest audience ever in series history delivering 12.3 million viewers at the 9pm premiere. The previous record was 10.9 million viewers from the season three premiere on October 14, 2012. The episode is also the strongest telecast for a series in basic cable history for adults 18-49 with 7.7 million. These results shatter the hit series’ previous record with an increase of +6% (A18-49) over the October 14, 2012 season three premiere. “The Walking Dead” season three series average for adults 18-49 delivers 6.8 million outperforming other television series season averages including “Modern Family,” ‘The Big Bang Theory,” “Two and A Half Men,” and “NCIS.” In addition to the 9 PM premiere, the show encored at 11 PM, midnight and 2am, delivering 16.6 million viewers for the night.

Following the 9 PM premiere of “The Walking Dead,” AMC premiered a new episode of “Talking Dead” at 10 PM. 4.1 million viewers tuned in to the live show. Hosted by Chris Hardwick, “Talking Dead” is a companion series to “The Walking Dead” and features Hardwick and fans, actors, producers and other TV enthusiasts, discussing and dissecting that night’s “Dead” premiere. The series expanded to a full hour with the final 8 episodes of season three.

“When you look at numbers like this, the first thing that comes to mind is how grateful we are to the fans of this show. They embrace ‘The Walking Dead’ in a way that we wanted to believe was possible but we never take for granted,” said Charlie Collier, AMC’s president. “The cast and crew put everything they have into making this show. They’re a phenomenally talented group who truly give their all. We congratulate everyone involved.”

Key Nielsen Highlights for the season three B premiere of “The Walking Dead”:

Key Nielsen Highlights for the season three B premiere of “Talking Dead”: