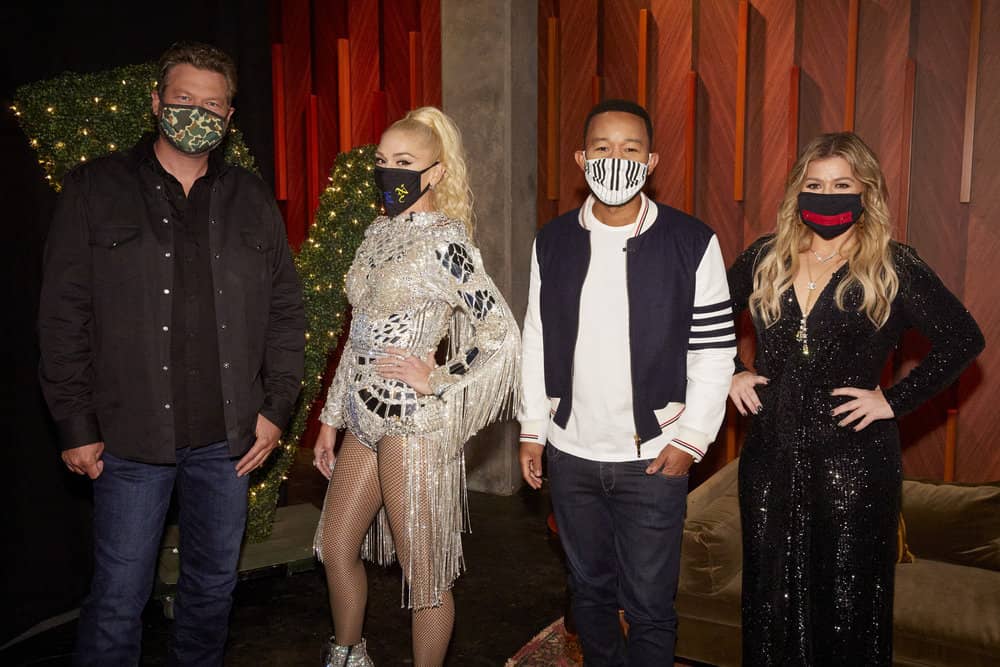 THE VOICE SEASON PREMIERE! OCT. 19 (8-10 p.m. ET/PT) on NBC “The Blind Auditions” In the season premiere, the talent is exceptional and the competition fierce as Gwen Stefani joins returning coaches Kelly Clarkson, John Legend and Blake Shelton as they vie to discover and coach the next singing phenomenon in the Blind Auditions. Vocalists will compete to be selected by one of the coaches and fight for a chance to be named “The Voice.” Carson Daly (“TODAY”) hosts.

The four-time Emmy Award-winning musical competition series “The Voice” returns with the strongest vocalists from across the country invited to compete in the show’s newest season.

The show’s innovative format features four stages of competition: the first begins with the Blind Auditions, then the Battle Rounds, Knockouts, and, finally, the Live Performance Shows.

During the Blind Auditions, the decisions from the musician coaches are based solely on voice and not looks. The coaches hear the artists perform, but they don’t get to see them, thanks to rotating chairs. If a coach is impressed by the artist’s voice, he/she pushes a button to select the artist for his/her team. At this point, the coach’s chair will swivel so that he/she can face the artist he/she has selected. If more than one coach pushes his/her button, the power then shifts to the artists to choose which coach they want to work with. If no coach pushes his/her button, the artist is eliminated from the competition.

Also returning this season is the “block,” which adds another layer of excitement during the Blind Auditions. The coach chairs each have an extra set of buttons with the other three coaches’ names. The block button prevents a coach from adding a new artist to their team. The coaches can only use their block buttons on one artist for the entire first round of the competition. When a coach hits the block button with the name of the other three coaches, the coach who hit it automatically turns around. The “blocked” coach only discovers they are blocked if they press their button. The blocked coach’s chair will still turn, however, instead of their lane lighting up with their name, it says “BLOCKED.” If the coach doesn’t press their button, the block is still available for another audition.

Once the teams are set, the battle is on. The coaches dedicate themselves to developing their team of artists, giving them advice and sharing the secrets of their success, along with help from their celebrity advisors. The coaches enlist music industry heavyweights to prepare their artists for the Battle Rounds – Leon Bridges for Team Kelly, Miguel for Team Legend, Kane Brown for Team Blake and Julia Michaels for Team Gwen.

During the Battle Rounds, the coaches will pit two of their own team members against each other to sing the same song together in front of a studio audience. They are vying for their coach’s confidence and decision to take them to the next round.

After each vocal battle, the coach must choose which of his/her singers will advance to the next round of competition. The losing artist is available to be stolen by another coach or available to be saved by their own coach, but unlike any other season, the team coach can only hit their button to save an artist after it’s clear no other coach is going to steal the artist. If no other coach has attempted to steal the artist by the time he/she gets down the stage steps, the artists’ coach can push to save them. Each coach will have one save and one steal in the Battle Rounds. Artists who won their battle or were stolen by another coach will advance to the Knockout Rounds.

In a new twist for the show, the four artists that were saved by their individual coaches during the Battle Rounds will not automatically advance in the competition. Instead, those artists will compete in the first Four-Way Knockout. Each of the four artists will receive individualized coaching and rehearsals with their coach and a superstar Mega Mentor in preparation for the Four-Way Knockout. However, the winner will ultimately be chosen by America. At the top of the final episode of Knockouts, voting will open for America to choose which of the four artists moves forward in the competition after their performances. At the top of the first Live Show, Carson Daly will reveal which of the four artists was voted through by America, and that artist will continue to the Live Shows with their original team.

For the remainder of the artists who made it to the Knockouts Round, one superstar Mega Mentor will be on hand to work with all the coaches and their teams as they prepare the artists for this challenge. In the Knockouts, the artists will be paired against a teammate once more, but this time they will select their own songs to perform individually while their direct competitor watches and waits. The coaches will choose the winner and the artist not selected will be available to be stolen by another coach. Each coach will only have one steal in the Knockout Round, making the stakes higher than ever.

Once the Live Performance Shows begin, the top artists will compete each week against each other during a live broadcast. As always, the television audience will vote to save their favorite artists. The artists with the lowest number of votes will be eligible for the “Instant Save.” These artists will each perform a new song that represents why they should earn the save. America will then have the opportunity to save their favorite performer by voting on “The Voice” App or NBC.com. The singers with the lowest number of votes will be sent home each week. In the end, one will be named “The Voice” and will receive the grand prize of a recording contract.

“The Voice” is a presentation of MGM Television, Warner Horizon Unscripted & Alternative Television and ITV Studios The Voice USA, Inc. The series was created by John de Mol, who serves as an executive producer along with Mark Burnett, Audrey Morrissey, Amanda Zucker, Kyra Thompson and Adam H. Sher.