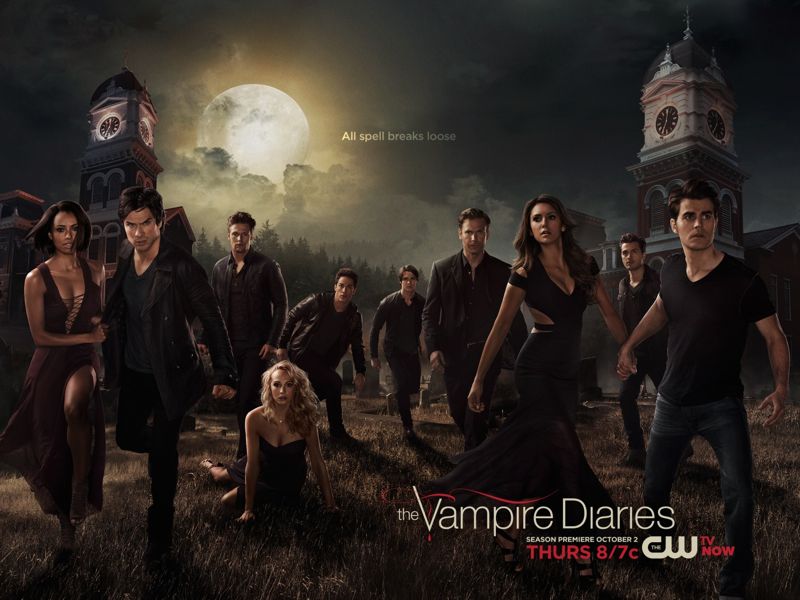 That’s right. Season 6 is all about the B-Team since being supernatural is not exactly desirable or celebrated as THE VAMPIRE DIARIES starts out this season. The Travelers may be gone, but they accomplished one goal: getting rid of the supernaturals from Mystic Falls.  The Travelers’ anti-magic boundary spell will burn anything supernatural that tries to enter Mystic Falls. So supernatural beings can only hover on the outside of town.  Thus, Caroline (Candice Accola) is unable to return home to live with her mom.  Stefan (Paul Wesley) cannot return to the Salvatore mansion.  Elena (Nina Dobrev) cannot hover around Jeremy (Steven R. McQueen) as he grieves over Bonnie (Kat Graham). And Alaric (Mat Davis) was forced to find employment at the college where Caroline, Elena, Tyler, Liv (Penelope Mitchell) and Luke (Chris Brochu) are attending.  The only ones able to stay in Mystic Falls were Matt (Zach Roerig), Jeremy and Sheriff Forbes (Marguerite MacIntyre), because they are all human.  Witches, werewolves, vampires and the like can only lurk on the outskirts.  Naturally, Caroline is frantically searching for a way to bring down the Mystic Falls banishment curse.  She cannot stand that there is an actual curse keeping her from her hometown — though everyone else seems content to be sequestered outside of town, preoccupied with their lives as they move on from the events of last year.

So where is everyone?  Stefan is out and about searching for a witch who could possibly figure out what happened with Damon (Ian Somerhalder) and Bonnie.  Elena is in denial over the loss of Damon and barely has her head in the game at college.  Caroline is obsessively searching for a way to break the banishment spell on Mystic Falls, and hounding Stefan every chance she gets to check on his progress.  Jeremy is drowning his sorrows and avoiding having to deal with anything that reminds him of Bonnie.  Matt, interestingly, has taken up to leading a community patrol group – which seems moot since all the supernaturals cannot get into Mystic Falls.  But, hey, everyone needs a cause or something to keep their mind off what they have all lost.  Alaric is coping with his vampirism and keeping watchful eye over Elena, because without Damon or Stefan around, someone needs to.  Tyler (Michael Trevino) is doing his best to live a carefree, normal life because his werewolf curse has not been re-activated. He just needs to keep his rage tendencies in check so that does not happen again.  And as for the witchy twins Liv and Luke, they are just trying to keep their heads down and get through college.

If that all sounds a little too tame, then you would be right.  Nothing is ever that idyllic in Mystic Falls or anywhere where our heroes can be found.  For one, there is something lurking just outside Mystic Falls, preying on the unwary.  Now that the attacks within Mystic Falls have stopped, the residents have become complacent when they should actually be more vigilant.  Shame that Matt’s community protection club is not patrolling just outside Mystic Falls; then they might actually have something to do.

For another, not everyone is handling their grief over the loss of Damon and Bonnie very well.  Some have not given up searching for a way to reach them wherever the abyss may have swallowed them up into.

The banishment is easy to see – most our heroes cannot go home, even if they wanted to.

Bewilderment is for those who cannot understand that some people grieve differently.  Grief can be open, loud and all-consuming with tears and anguish; but it also can be seen in denial and/or acceptance.  The fact that Elena is not crying every second worries a few people and the fact that Jeremy will not even talk about Bonnie worries others.  Everyone is handling their grief and loss differently and no one seems to know what to do about it.

As for the bonding, well, it is interesting who is spending time with who these days. As, for now, everyone seems uncoupled and not really interested in romantic ties.  Alaric is completely flustered when one of his fellow faculty members tries hitting on him and even Tyler seems to be off his lady-charming ways too.  Then Elena has no desire to look elsewhere at the moment as she is still too caught up in her lost-love Damon.  Though Stefan is more of a wobbler.  He claims he is not ready for another great love or relationship, but his heart may be leading him in ways he does not expect.

All this is to say, our heroes are not exactly themselves these days.  Losing Bonnie and Damon has affected them all in unexpected ways and the ripple-effects are startling.  What is up with Bonnie and Damon, or even Enzo (Michael Malarkey)?  Well, that is what everyone is dying to know. Just do not expect any answers right away.  THE VAMPIRE DIARIES likes to draw out its stories on occasion and this is one of them.

So be sure to check-in to see Stefan, Elena, Caroline, Tyler, Matt, Jeremy, Liv, Luke, Alaric, Sheriff Forbes and newcomer Tripp (Colin Ferguson) and what they are all up to for the Season 6 premiere of THE VAMPIRE DIARIES on Thursday, October 2nd at 8:00 p.m. on the CW.  You will not believe what shocking surprises they have in store.