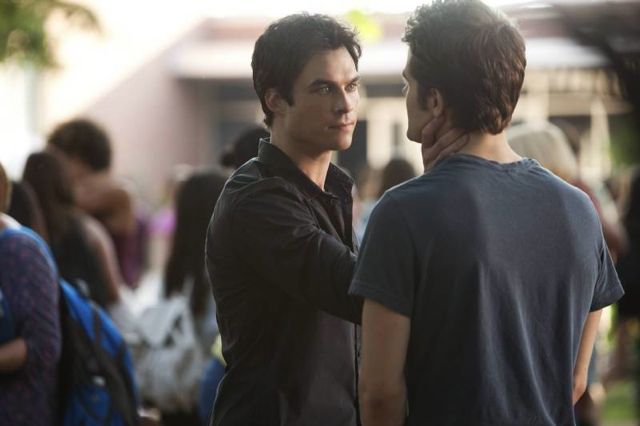 THE VAMPIRE DIARIES Season 5 Episode 2 True Lies Promo : MISSING PERSONS — Without telling Elena (Nina Dobrev) that Stefan (Paul Wesley) is missing, Damon (Ian Somerhalder) turns to Sheriff Forbes (Marguerite MacIntyre) for help finding his brother.   Elena and Caroline (Candice Accola) try to find out who is covering up a campus murder, and a fellow Whitmore student named Jesse (guest star Kendrick Sampson) gives Elena some intriguing information about Professor Wes Maxfield (guest star Rick Cosnett).  While Jeremy (Steven R. McQueen) struggles to return to his old life, he continues to be the only person who can see and talk to Bonnie (Kat Graham), but he can’t convince her that it’s time to let the others know that she sacrificed her own life for his.  After learning that Silas is searching for Katherine, Damon asks Matt (Zach Roerig) and Jeremy to keep her out of sight, but the situation quickly spirals out of control.  Finally, Nadia (guest star Olga Fonda) uses violence to make a point about her own agenda.  Joshua Butler directed the episode written by Brian Young (#502)