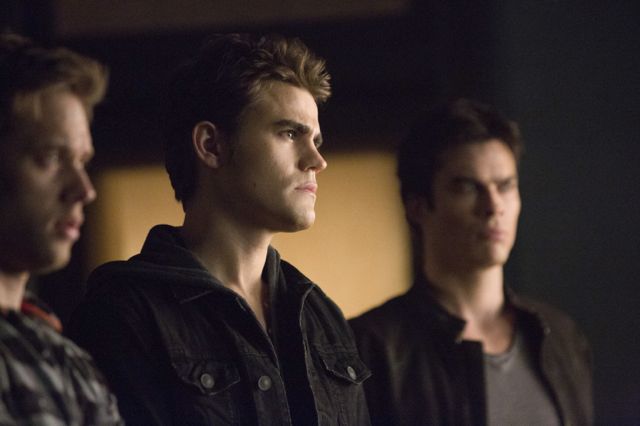 THE VAMPIRE DIARIES Season 5 Episode 10 Fifty Shades Of Grayson Photos : DAMON’S PAST RETURNS TO HAUNT HIM — Damon (Ian Somerhalder) realizes Elena (Nina Dobrev) is in danger and enlists Stefan’s (Paul Wesley) help to find her.  The brothers pay a visit to Aaron (guest star Shaun Sipos), and Damon shocks Stefan by revealing his first-hand knowledge of Aaron’s family.  In an attempt to stop Damon, Dr. Wes (guest star Rick Cosnett) unleashes his secret weapon, forcing Damon to deal with a part of his past he thought was gone forever, as well as the consequences of his decades-long plan for revenge.  Meanwhile, Elena is horrified by Dr. Wes’ confessions about the dark history of Whitmore College and his own ultimate goal.  Finally, a frantic Katherine (Nina Dobrev) turns to Matt (Zach Roerig) for help, until she realizes that Nadia (guest star Olga Fonda) may be the one who can solve her problem.  Kellie Cyrus directed the episode written by Caroline Dries (#510).