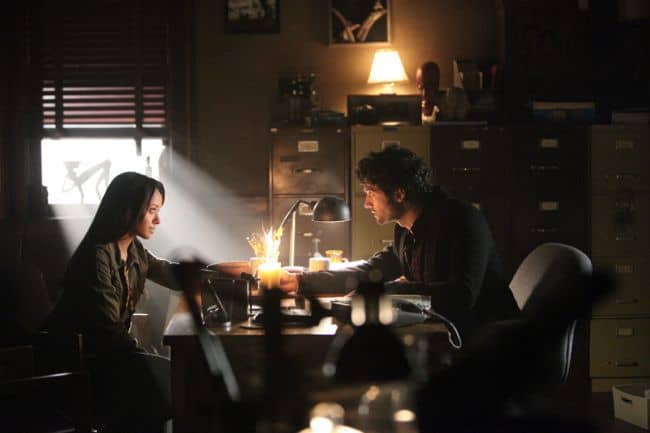 THE VAMPIRE DIARIES Season 4 Episode 11 Catch Me If You Can Promo : A NEW DANGER — Jeremy (Steven R. McQueen) is furious when Klaus (Joseph Morgan) tries to control him by putting Matt’s (Zach Roerig) life in danger. Damon (Ian Somerhalder) coaches Jeremy as he prepares to take on Klaus’ new vampires, but they find that Kol (guest star Nathaniel Buzolic) has beaten them to it. Kol makes it clear that he will stop at nothing to convince everyone to give up the search for the cure. Looking for a new ally, Rebekah (Claire Holt) reminds Stefan (Paul Wesley) that they were once close friends. When Sheriff Forbes (Marguerite MacIntyre) and Mayor Hopkins (guest star Rick Worthy) question Shane (guest star David Alpay) about his involvement in the Founders’ Council deaths, Bonnie (Kat Graham) steps in with questions of her own, and Shane’s responses push Bonnie to the edge of her powers. Elena (Nina Dobrev) negotiates with Klaus to keep Jeremy safe, but when danger suddenly appears from a totally unexpected enemy, Elena comes up with her own daring plan for Jeremy. John Dahl directed the episode written by Brian Young & Michael Narducci (#411).