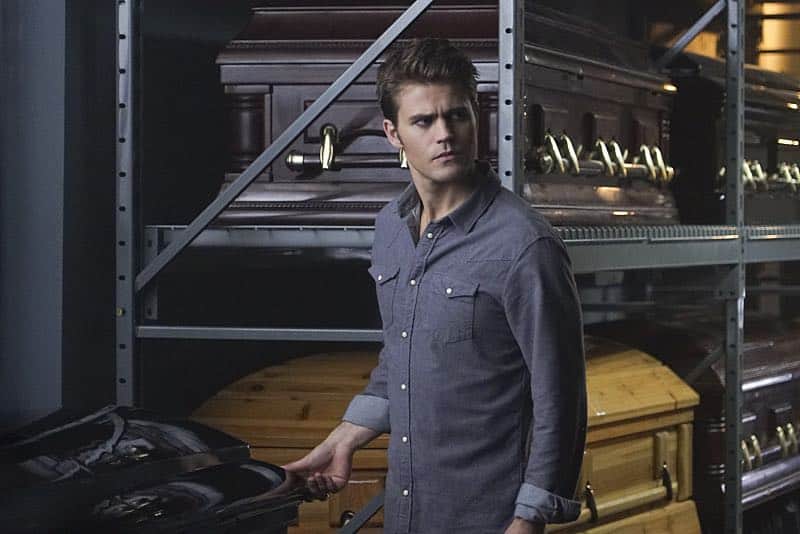 With both Damon (Ian Somerhalder) and Stefan Salvatore (Paul Wesley) just itching for a chance to inflict some well-deserved punishment on Lily (Annie Wersching) and Julian (Todd Lasance) – Lily for giving the idea to Kai (Chris Wood) to put Elena (Nina Dobrev) into a sleeping spell tied to Bonnie’s (Kat Graham) life and Julian for killing Stefan’s unborn child – Thanksgiving dinner with the Salvatore family and friends is not going to be the basking in “all things to be thankful for.”  Rather it just may be one of those “till death do us part” kind of celebrations — or not part in the case of Julian and Lily as everyone finds out that in order to protect Julian, Lily tied her life to his.

That’s right.  Foolish Lily figured out that the best way to keep her sons from teaming up to kill off her undead boyfriend Julian was to link her life to his.  Stefan does not want to kill Lily, just Julian.  But Damon, he would be happy to kill off both Julian and Lily.  Neither hold a soft spot in his heart these days.  So in poising Stefan and Damon against each other, that is supposed to keep the peace and keep everyone safe.  Um, Lily really does not know her sons at all, does she?

Plus, it is not all up to Damon and Stefan.  There are a few more players on the chess board:  Bonnie, Caroline (Candice King), Alaric (Matt Davis), Valerie (Elizabeth Blackmore) – just to name a few.  With that many powerful enemies, the chances of Lily being long for this planet, especially now that she has linked her life to Julian’s, are not good.

Heretics may be powerful, but given the tenacity of a witch like Bonnie, who can summon the power of her ancestors, or even Valerie, who has shown that her powers are not to be trifled with either, things are certain to get a little bit combustible with so many witches, vampires and Heretics determined to be the victor in their Mystic Falls stalemate.

In a recent interview from the set, star Ian Somerhalder gave a shout-out to the Bonnie/Damon dynamic and power-duo in dealing with the Heretics, by saying:  “I thought Bonnie would shut him down, but then she ends up joining him.  So the Bonnie/Damon relationship – I mean, poor Bonnie, he just drags her repeatedly through the mud over and over again and she still loves him.  I don’t know why.  . . Bonnie does end up having a lot to do with it, but obviously at her own expense.  Kat Graham is such a strong actor and Bonnie is such a strong character that I want her – and you see her start coming back into own and taking a lot less shit.  She has such a huge heart and when you have a huge heart and everyone wants something from you, it wears you down a little bit. So I think it is time for Bonnie to kick some ass.”

Co-star Kat Graham also revealed, “The Bonnie/Damon/Lily storyline – you’ll see it evolving over the next few episodes and you’ll see Bonnie being a support system for Damon.  Whereas, I feel like the old Bonnie would not have gone along with any of his plans, I think you’ll start to see Bonnie start to take things into her own hands to do things to support Damon.  But the Lily storyline has a ways to go before it kind of reaches its culmination.”

Ian also foreshowed the Damon-centric flashback coming up in Episode 10:  “Ultimately, you really get to see where Damon Salvatore came from. You get to see this propound relationship with his mother.  You really get to understand how he got to be the man he is. . . You will see what happened to Damon. You will see a profoundly disoriented, scared, sad man, who is like a caged animal.”
As to those teasing flashforwards, Ian laughingly revealed: “Damon is never where he wants to be.  Damon is that guy.  We have seen it systematically.  At 170-something years old, this guy makes the worst decisions.  He is 170-something years old and for 2 years he was dating an 18 year old.  First of all, maybe not the best decision – there is a bit of an age gap.  What is interesting about the flashforwards is being able to bookend each episodes with this flashforward 3 years in the future because you basically get to see the characters 3 years in the future and then you cut to present time and you just get a different flare.  It mixes up the format, which is just super cool.  You definitely see Damon in some of these flashforwards.  But is he where he wants to be?  Is anyone where they want to be?  Especially this poor bastard. I would venture to say ‘No,’ but what is cool about this is that unlike real people, their struggle and their sorrow and their misery is our entertainment.”

As to what the future holds in store for Damon and his eternal love, Elena, this is what Ian revealed:  “This is a huge arc of this man.  It’s not necessarily a slow burn, but there is a lot that happens with regard to Elena and him, where he is going and the path that he is going to have to take to get there and, ultimately, how much is his mother going to affect him?  How crazy is it going to make him?  What stupid things is he going to do?  And at the end of the day, is he going to have his brother?  Because people come and go out of your life, but the true love of family – the true love of brothers is beyond powerful.  It’s a very cool way to tell the story of these two brothers who love each other through thick and thin and who would do anything for one another.  Damon is this man – highly complex – but at the end of the day:  a man.  He is like most of us men, in so many ways, just a scared little boy just trying to navigate the treacherous landscape of life and the odd things is after 174 years of being alive, still just makes the dumbest mistakes.  But it is as entertaining as hell to us.  So you can be rest assured that he will continue to do his best and make these big, giant, stupid mistakes and continue to entertain us.  But I can tell you that as this season progresses, it does get very cool and very deep.  I love that because we have the ability to be funnier and edgier and sexier and darker, and it is what made this show this show.”

Paul Wesley also chimed in on the Stefan/Damon relationship:  “They are more kind of buddies, aren’t they? It’s weird.  It’s like they are the main love-story.  It’s sort of that fraternal, that kinmanship, that thing that I think is more powerful in effect this year more than ever – which is probably good.  They should be teaming up and sort of fighting the negative outside forces. . . I think there is no room for them to be at odds with each other.  Because Damon was the villain of Season 1 and that is just no longer the case.  Stefan was the villain of Season 3 and whenever Silas was around. . . So there is no room for either one of them to be the villain anymore.  I think people really enjoy it when the brothers are – they compare it to the guys on SUPERNATURAL and buddy-up and fight bad-guys.”

As to where Stefan is in his journey, Paul shared that:  “Stefan is definitely much more mature.  He was a lot more, I think, naïve in Season 1.  He was like so wide-eyed.  He was like 160 years old and in love with this young girl and he was so wide-eyed about it.  He’s a little more worn or something, and he’s a little more like – I don’t know – he’s more of a realist in a way.  He’s less of a romanticist. “

Kat then teased about the upcoming holiday episode:  “The Christmas episode is actually when you see Bonnie interacting more with the Heretics and you start to see those storylines develop.  Bonnie had pretty much killed Heretics or stood by Damon while he kill Heretics, or Matt (Zach Roerig) or whoever is killing them.  So I wouldn’t say that she sympathizes with them, but we start to see that their storylines become intertwined and it’s very, very good.”

Candice King further teased about the holiday episode: “There wasn’t a tree. But Santa was there and a lot of beautiful snow — and I think it looked really beautiful.  It was really fun.  . . The snow is falling and you’re like, ‘This is so magical!’.”

Kat revealed that Bonnie’s hero-complex comes into play as well:  “Bonnie would be very concerned about the well-being of her friends and that has never changed. That hasn’t changed from Season 1.  I think Bonnie’s gotten a lot of flack about being that character that does that.  [Laughs] I wouldn’t do that!  But she does that. . . There are very people in the world, but there are a few – and handful maybe – that would do that and put themselves in harm’s way and very dangerous situations for their friends because they believe they can save them.  They believe that they are that powerful.  They are not doing it because ‘I’ve got nothing else going on in my life.’  I think Bonnie is a bit over-confident at times.  She’s like, ‘I’ve got it.  I can do it.’  And I think that is a huge thing that I think people need to remember – that this isn’t a character that ever expects to fail.”

As to whether Enzo still has a part to play as a hero this season, Candice shared:  “There’s been multiple times when the big, bad wolf teams up with the good guys in this series.  There’s been times when Enzo was on the bad team and then he swapped to the good team. . . So just because someone’s bad or considered to be the bad guy in one episode, I don’t think that really defines them throughout the series.  They can always change.”

To find out just whose carcass gets served up during the Thanksgiving dinner at the Salvatores, what magical delights the Christmas episode brings, and just what dire threats will rise up against our heroes and possibly the Heretics too, be sure to tune in for all new episodes of THE VAMPIRE DIARIES on Thursday nights at 8:00 p.m. on the CW.
In case you missed it, here’s where you can see our video interviews with the cast from the set:  http://seat42f.com/the-vampire-diaries-scoop-from-the-set-interviews-with-candice-king-paul-wesley-ian-somerhalder-and-kat-graham.html