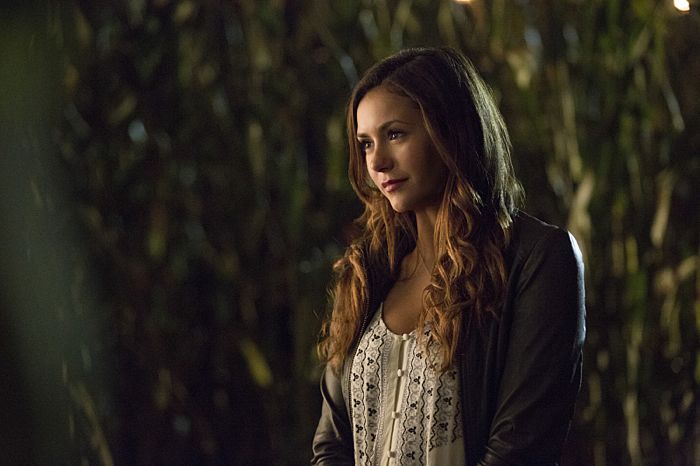 The CW’s ultimate horror-fest series THE VAMPIRE DIARIES offers an emotionally wrought and tricky Halloween episode, which is very apropos in its title “The World Has Turned And Left Me Here.”  Halloween on its lighter side is a celebration with costumes, haunted houses, spooky mazes and lots of candy and revelry.  On its dark-side, Halloween offers our darkest fears of serial killers, things that go bump in the night, and in the case of Mystic Falls, perhaps a vampire or two looking for a midnight snack.

In last week’s episode, Stefan (Paul Wesley) was surprised to find his dead girlfriend Ivy (Emily Chang) was back.  Apparently, Enzo (Michael Malarkey) had a few pangs of remorse over killing Stefan’s girlfriend.  But baby-vamp Ivy is just what no one needs on Halloween — that girl is equal parts angry and hungry, and she is about to take out her wrath and hunger pangs on anyone who crosses her path.  But Stefan, being Stefan, will want to save her and turns to the one person he knows won’t turn him away with this new supernatural problem.  Alas, poor Caroline (Candice Accola) is also a vampire-on-the-verge as she is perhaps just as angry and frustrated as Ivy is with Stefan.  Pity Stefan if those two girls team up against him!

As for the newly mind-wiped Elena (Nina Dobrev), she has plans of her own for the festivities for All Hallow’s Eve.  She just wants to have fun and she has not only invited her new hot, boy-toy Liam (Marco James), she invited Alaric (Matt Davis) and Jo (Jodi Lyn O’Keefe) in order to give those two reluctant lovebirds a chance, and about half the students attending Whitmore College.  Just what kind of party does she have in mind?  How about a corn maze filled with ghosts, goblins, and college kids dressed up and dripping in fake blood.  Fake blood is all good, but what happens when Alaric or anyone else of the vampire persuasion gets a whiff of a little real blood?  Let’s just say that corn mazes and blood oozing from the four corners having the makings for a tragedy that will haunt Elena’s creep-fest event.

Speaking of those who love to revel in fresh blood, just where has darling Enzo gotten off to now and what trouble is he brewing?  All the guesses in the world are not going to prepare fans for that revelation.  Picture a door and then picture an unrepentant Enzo and you will be getting warmer on what he is up to right now.

Another favorite vampire, who may or may not be feeling a healthy dose of repentance, is Damon (Ian Somerhalder).  Trapped in virtual hell with Bonnie (Kat Graham) to relive the same day over and over again, Damon never imagined that his personal hell could get any worse — then he met Kai (Chris Wood).  That’s right, there was somebody else trapped with Bonnie and Damon in that other dimensional hell-hole.  But Kai is really not anyone that either Damon or Bonnie really wants to be stuck with.  That kid not only has issues, he just might be the devil himself given all his crimes and how utterly unrepentant his is about them; and neither Bonnie or Damon relishes the prospect of unleashing that demon back on the unsuspecting world he was banished from.  So just how are they going to get the spell they need from Kai and find a way to make sure he doesn’t tag along on the return trip home?  It may require a sacrifice that no one of them are prepared to make.

So what do vampires have to fear on All Hallow’s Eve? For one, vampire hunters.  That’s right.  Tripp (Colin Ferguson) is still lurking out there ready to pounce on any vampire that crosses his path.  For another, other vampires who may or may not share the same agenda or morals.  And third, how about a history redux?  History repeating itself is a curse for anyone, but it is more likely with vampires simply because they keep on living their many lives over and over throughout time.  And if it is not the same events replaying over and over again (with maybe just different characters or victims), it is being haunted by the memories of all their past lives and the multitude of sins they have racked up over the years.  Damon and Stefan are prime examples of vampires racked with guilt.  But one very alive human just might be the living incarnation of a perfect guilt-trip from one of Damon’s past killing sprees.  Something tells us that should Damon ever encounter this person, he is going to feel the weight of his past sins in more than just a haunting fashion.

THE VAMPIRE DIARIES sure knows how to deliver a wallop of a Halloween episode.  It is going to make your skin crawl, the hairs on the back of your neck stand up, and there will be a glimmer of a shadow just outside your vision that shall haunt you the entire episode.  Why? Simply because people you do not expect to see do jump out when least expected and there is going to be lots and lots of blood at all the wrong times.

On a lighter note, a few fun things to look forward to include Damon and Bonnie sharing a “let’s get awkward” moment — rather, that is what Damon calls it — and a few grand gestures that will melt any hardened heart of stone.  Yet for every moment of joy, there will also be moments that rip your heart out.  Be warned.

So you are invited to enjoy this All Hallow’s Eve with THE VAMPIRE DIARIES as it airs  “The World Has Turned And Left Me Here” on Thursday, October 30th at 8:00 p.m. on the CW.