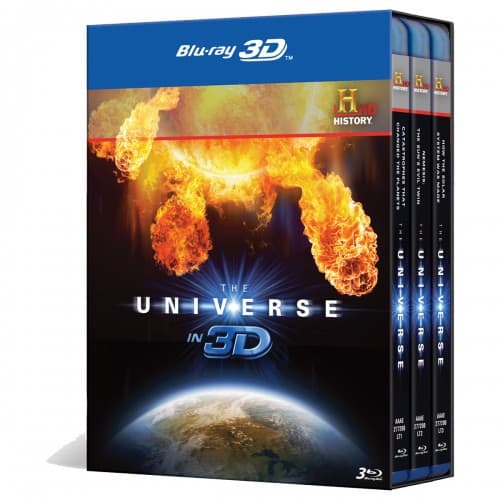 Seat42f and History have teamed up to give TWO lucky winners a copy of  THE UNIVERSE 3D BLU-RAY SET on BLURAY. For a chance to win leave a comment below telling us why you want to add THE UNIVERSE 3D BLU-RAY SET to your BLURAY collection. Only one entry per person. Contest ends December 14th. Winners will be notified on December 16th via email so make sure to use a valid email address when you post your comment.

The planets of our solar system have experienced epic catastrophes throughout their long history, both raining down from outside and bubbling up from within. This November, explore the edges of the cosmic unknown with THE UNIVERSE 3D BLU-RAY SET, a follow-up to 7 WONDERS OF THE SOLAR SYSTEM 3D, which is currently #2 selling non-theatrical blu-ray 3D in the marketplace!

Featuring three new specials NEVER BEFORE AVAILABLE IN 3D, voyage back in time to investigate the violent events that profoundly shaped the planets, including earth itself.  Home viewers will be witness to stunning revelations about what transformed Mars into a barren, hostile desert, the disaster that changed Venus from temperate to hellish, the impact that blew away Mercury’s mantle, turning it into a planetary core, a colossal disturbance that rearranged the orbits of the gas giants, how a lost moon may finally explain Saturn’s rings – and more.