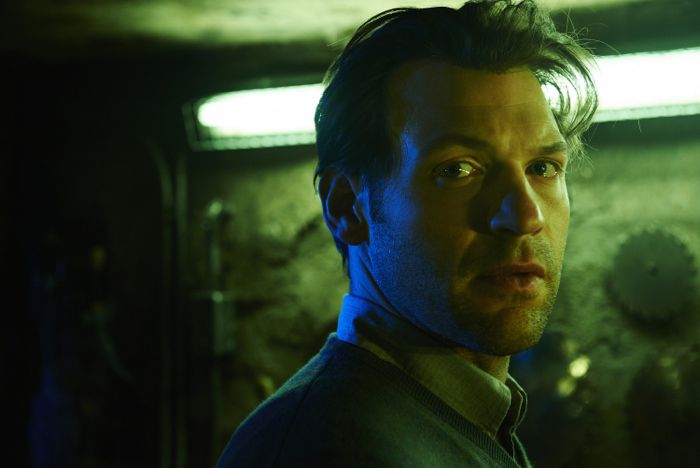 FX has done it again with THE STRAIN. What I mean by that is they’ve got yet another well-developed series full of fascinating characters, engaging stories, and an original premise. THE STRAIN does feel like many vampire movies of a certain vein (think: Blade), but there is absolutely nothing like it currently on TV, meaning there is no pattern for it to follow as it unfurls. This makes for a rich, unpredictable mix of ingredients which already feel special before they’re fully cooked.

THE STRAIN is based on a trilogy of novels co-written by Guillermo del Toro (Pan’s Labyrinth, Hellboy), who is working on the show, too, having directed the first episode and writing screenplays for it. His style, creepy and dark, is prevalent throughout the pilot, “Night Zero,” which takes place in a single night. There is definitely a clear voice behind the narrative, one infused with talent and flair, and that comes through right away. If this quality can be maintained, the series should easily find its audience.

THE STRAIN begins on a plane. Something is lurking in the cargo hold that should not be, and by the time the machine touches down on the tarmac, all is silent on board. The CDC, led by Dr. Ephraim Goodweather (Corey Stoll, House of Cards), among other agencies, swarm to investigate. What they find is a horrific situation that baffles their greatest minds and has no clear cause or prevention. Will they be able to start to unravel the mysteries before the situation spirals out of hand? Hard to tell, since the plot rockets away in the first hour, already moving quite rapidly.

They may get some help from a seasoned veteran of the ancient battle, Abraham Setrakian (David Bradley, Harry Potter, Broadchurch). Abraham appears to be a Holocaust survivor who has known his war isn’t over, but has been satisfied with the long cease-fire. He is compelled to come out of retirement when he senses the game is once more afoot, but since he is a grizzled old man with a thick accent, it might be hard for him to get the attention of anyone that cares.

Ephraim and Abraham seem to be our two primary heroes, and they could not be any more different, making it unlikely they’ll become fast partners, but that’s OK. This isn’t your typical two-people-stop-a-baddie formula. Instead, it appears a massive war is being teed up in the heart of New York City, a very populous place, making Abraham and Ephraim but two players in a larger plot, the focus in a vast scope. They may not even spend all that much time together, though both will probably be needed in whatever solution emerges in the end.

Both men are introduced in very telling scenes, showing different sides of their personas. We first see Ephraim rushing, perpetually late, to a custody meeting with his wife, Kelly (Natalie Brown, Bitten), whom he doesn’t want to let go, but whom he’s already lost. Abraham, meanwhile, takes down two thugs (one of whom is played by Veronica Mars’ Francis Capra, a recurring player here) who seek to rob him. Both of these show the men in ways we probably won’t always see them throughout the series, but tell us something inherent to their personalities, so is a cool way to begin with them.

The villains are complex, too, though less fleshed out from the start. Eldritch Palmer (Jonathan Hyde, Titanic) is the wealthy benefactor who lures the danger towards the Big Apple. He is assisted by the cold Thomas Eichhorst (Richard Sammel, Inglorious Basterds) and, strangely enough, a Latino street gang. They have a plan and have had time to carefully enact it, meaning the good guys are starting a few steps behind, so it may just be too late to stop Palmer.

With a terrific cast that also includes Sean Astin (The Lord of the Rings), Mia Maestro (Alias), Kevin Durand (Lost), Ben Hyland (House of Cards), Jack Kesy (Morgan), and Miguel Gomez, it’s one of the most intriguing pilots I’ve seen this summer. The mythology is obviously carefully mapped out and it is genuinely scary, with major characters and countless extras sure to die in the coming weeks in this incredibly dangerous world. Watching THE STRAIN feels like viewing a grand film, rather than a TV show, with great visual effects and a large sense of purpose and drive. The story is finite and it’s going somewhere. I’m excited to see what that destination is.