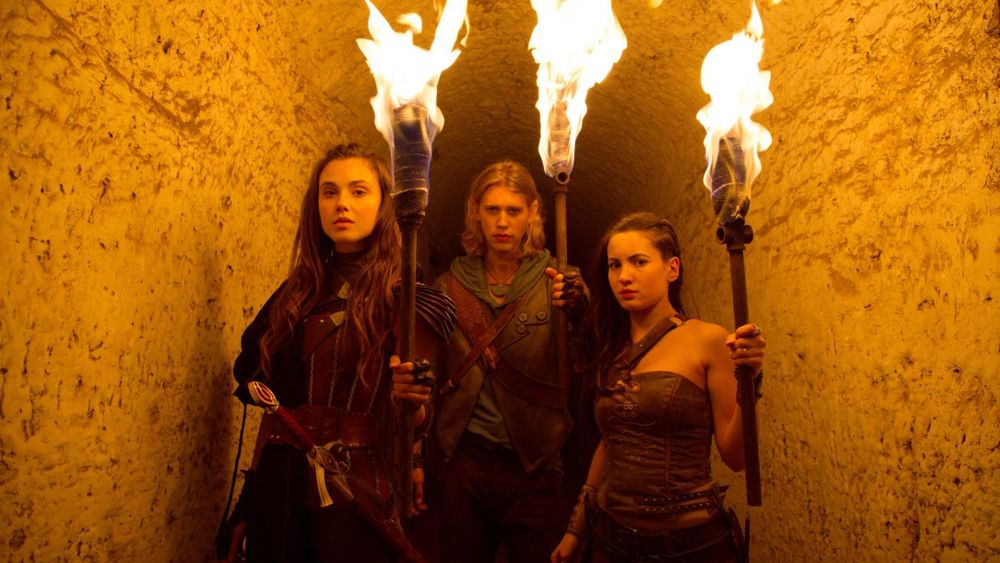 MTV becomes a player in the modern television landscape with THE SHANNARA CHRONICLES, premiering this week. Sure, the network has had some modest hits, such as Teen Wolf, and some quality programming, such as the first few seasons of Awkward. But THE SHANNARA CHRONICLES is a turning point because it’s a big budget epic with complex characters (who aren’t all teenagers) in a sweeping, fully developed world. Based on the trilogy by Terry Brooks (well, mainly the middle volume), this is the first show MTV has aired that I could easily see one of the higher quality networks carrying.

THE SHANNARA CHRONICLES is set in a geographically small area on a future Earth in which mankind has died out. Elves control the height of civilization, with trolls and roamers on the fringes, all living in the ruins of once-great cities and technology, now nearly eroded away.

That’s where this main action begins, but it’s not where this story does. There is a lot of backstory revealed in bits throughout the two-hour pilot (from the first book) that set the stage for this world, and plays into the crisis at hand. Magic, thought to have died out with the Druids, is making its return as demons seek to escape their imprisonment and conquer the planet for good. Can they be stopped?

THE SHANNARA CHRONICLES introduces us to a pair of heroes who may or may not be up to the task. Princess Amberle Elessedil (Poppy Drayton, Downton Abbey) is a headstrong young woman who refuses to accept her place in society, and is formidable enough to make waves, earning a position in a male-dominated force. She is joined by naïve Wil Ohmsford (Austin Butler, The Carrie Diaries), a half-elf with heroism and magic in his blood, though Wil is ill-prepared to follow in those footsteps at present.

Were those the only two principal players, this would be a typical MTV series. Instead, there’s actually quite a few others. Allanon (Manu Bennett, Arrow) is a druid awoken from a multi-decade slumber who takes Wil on as his apprentice. King Eventine (John Rhys-Davies, The Lord of the Rings) is the ruler who has swept the horrors of the past under the rug, and now struggles to hold onto his legacy. Heir-to-the-throne Ander (Aaron Jakubenko, Neighbours) has a different idea on how to handle current events. Younger Arion (Daniel MacPherson, Neighbours) enjoys the perks of royalty without the responsibilities. And roamer Eretria (Ivana Baquero, Pan’s Labyrinth) wants freedom from her clan’s leader (James Remar, Dexter).

Now, while this is not a top-tier cast, it is a group of performers who hold their own in this Lord of the Rings-type fantasy. Together, they make up a varied ensemble who’ll likely face death nearly as often as those on Game of Thrones, though being on basic cable, THE SHANNARA CHRONICLES pulls back slightly on violence, disregards all profanity, and only flirts with nudity. Though it does the latter quite often.

Filmed in New Zealand, THE SHANNARA CHRONICLES feels epic and sweeping, and likely owes a lot of that to the novels it is adapted from. There is no need for the show’s writers to develop a world as they go because one has already been clearly laid out ahead of time. That being said, the source material isn’t enough to keep this show going for more than a couple of years, so the written work is likely to be a jumping off point, rather than the sole inspiration.

I liked THE SHANNARA CHRONICLES a lot. It feels more sophisticated and well-made than the typical MTV fare. IT may not win any awards, but it signals that the network isn’t just going to keep churning out sexy teens doing scandalous things as their only programming, and I look forward to seeing if their viewers embrace it, or maybe even earn the channel a new audience.

THE SHANNARA CHRONICLES premieres Tuesday at 10 p.m. on MTV.