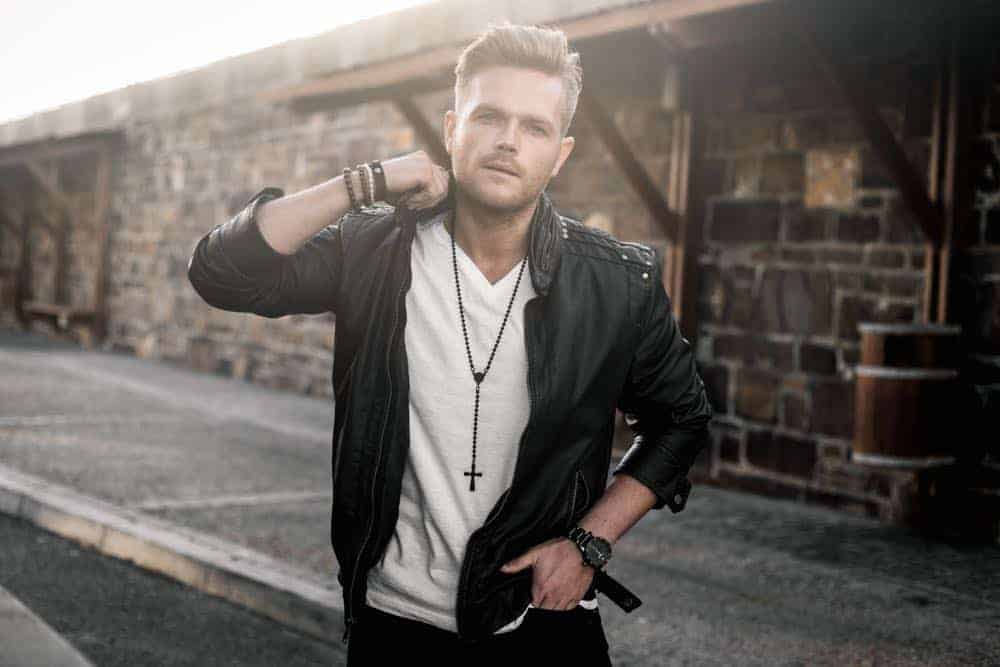 In what is shaping up to be a rich and rewarding year, Greg Kriek not only stars in the indie film The Serengeti Rules , he is starring in a number of other films coming out this year as well. With a history of portraying a wide array of characters, Greg is a chameleon on screen. His desire to be challenged and to embrace everything he can has provide him with an incredible career so far. It is a pleasure to see him rewarded for his tenacity and perseverance. In an exclusive interview, Greg talks about the amazing opportunity to work on The Serengeti Rules as well as reflects on some of the key lessons he has gleaned during his tenure as a working actor.

What was the initial appeal for you about portraying Tony Sinclair and working on “The Serengeti Rules”?
GREG: I have always been drawn to portraying people who have left a legacy and truly impacted society. When I was offered the opportunity to play Oxford zoologist Tony Sinclair, it was a part I grabbed with both hands. The fact that I was also able to do this with an Oscar-winning team was nothing less than a dream come true. Tony’s pioneering work flipped our view of nature on its head and gave the world a chance to reimagine the world as it could and should be.

How would you describe who Tony is in the film?
GREG: Professor Anthony R.E. Sinclair was born in 1944 and raised in East Africa. He obtained a PhD from Oxford University in 1970. Sinclair’s fascination of African nature brought him back to the continent in 1965 where he began his research on the Serengeti, work that spanned 52 years. He is now Professor Emeritus at the University of British Columbia, Vancouver, Canada. He is a Fellow of the Royal Society of London and the Royal Society of Canada and in 2013 he was awarded the Aldo Leopold medal from The Wildlife Society, USA. Sinclair has conducted ecological research on the role of biodiversity in the functioning of ecosystems around the world including Africa, Australia, New Zealand and Canada. His work in the Serengeti focused on how the ecosystem repaired itself after the catastrophic rinderpest disease of 1890. Because of his work, we now have a better understanding of the role animal migrations, food shortage and predation play on the stability of an ecosystem, knowledge that can be used to restore ecosystems around the world.

What do you most admire about him?
GREG: Tony is a man who defied the status quo, followed his gut and made tremendous personal sacrifices for his work — that ultimately help change the way we view the environment today. I admire his defiance of a society who, despite facing adversity through most of his life, still remained true to his heart.

What was it like working alongside the talented ensemble in “The Serengeti Rules”? Who do you get to work with most in the film and what is that experience like?
GREG: Owing to the nature of the story — where Tony did a lot of his research in isolation — many of my scenes follow me alone and gave me an opportunity to work with incredible director Nicholas Brown and cinematographer Tim Cragg. We formed a fantastic bond. The experience of filming out in the African wild and getting a taste of what it must have been like to do research in the field (where you have to wait for nature to reveal itself to you) was an eye-opener. I learned so much in the preparation for the part. When keystones are removed, ecosystems unravel and collapse—a phenomenon no one had imagined—or understood until Tony’s revolutionary discoveries. But with new knowledge also comes new hope – Tony’s work revealed the remarkable resilience of nature—and how the rules he discovered can be used to upgrade and restore the natural world. They give us the chance to reimagine the world as it could and should be. “The Serengeti Rules” will forever change the way we see nature.

Any favorite scene that you can share from working on the film?
GREG: There’s a scene where Tony makes a life/ career defining speech in the face of his critics – I really enjoyed the challenge of emulating the actual speech and finding Tony’s mannerisms and speech patterns. The scene also resonated deeply with me with the need to take a stand and fight for what you believe in despite the odds stacked up against you.

How would you describe what “The Serengeti Rules” are and how we perceive life around us? How does your character view “The Serengeti Rules”?
GREG: We find ourselves in strange and puzzling times; science is under attack like never before. News about the environment is too often marked by doom and gloom with a litany of seemingly insurmountable challenges. Popular culture blazes forward, glamorizing youth and celebrity, seemingly unable to the take time needed to properly observe what is happening to the world all around us. It’s against this backdrop, that “The Serengeti Rules” takes an audacious stand. This feature flies in the face of contemporary culture – almost defying it. Traveling to remote parts of the planet, as well as backyard streams and woodlands, “The Serengeti Rules” immerses viewers in a life-long pursuit to understand how nature works. And as the pioneers in the film turn the scientific picture of nature on its head, like them, the viewer too will start to see nature in a different way. Tony’s work helps confirm that across the planet, there are universal rules that stitch all ecosystems together. The film highlights how our steady stripping out of species from the top of the food chain– in particular predators – can cause the environment around us to collapse to a lower denuded base level. It calls into question our attitude toward predators like big cats and wolves, and highlights the dangers of stripping 90 percent of predatory fish from the oceans. But more importantly, “The Serengeti Rules” is a story of hope and heart. Tony’s work reveals a much more exciting discovery, how using the rules of nature, we can upgrade the environment around us and begin to address some of the greatest environmental challenges of our time. The film reveals the importance and the joy of scientific inquiry, and the rewards of a life well lived.

As an actor, what has been the one thing you haven taken away from the experience of working on “The Serengeti Rules”?
GREG: Tony said, “There’s now a mystery to solve. I’ve always said that science is detective work. But at the time we started nobody knew anything at all.” Playing Tony reminded me once again how important it is to be a ‘detective’ in life and not just accept everything as the truth. We need to be more curious, we need to challenge the status quo — and question the way things are and are supposed to be. For without challenging the norm, we would never grow and be led on a path to discovery that may change the world.

What is your proudest achievement working on “The Serengeti Rules”?
GREG: There’s no greater honor for me as an actor than to play a real person and to bring that person to life on screen. Having the opportunity to play such an incredible pioneer — whose life’s work made a tremendous contribution to the way humanity views the environment today — is something that I handled with the utmost respect. It is an experience that I will cherish for years to come.

You also worked on “Blood & Glory.” What did you enjoy about working on that project? What did you take away from that acting experience on “Blood & Glory”?
GREG: I am both a big rugby fan and a closet history nut — so having the opportunity to work on a period piece exploring the origins of rugby and the history between the Brits and the South African Boers was a dream come true. I’m always a sucker for stories that are gritty or that require me to be challenged physically/ emotionally and have a message of hope in the harshest of circumstances. Despite the grueling hours and physical challenges of filming this movie, I really was in my element.

Then you are also appearing in “Tremors: A Cold Day In Hell” and the new “Lake Placid.” What did you enjoy about working on those projects?
GREG: What a treat to get to work on two cult franchises that I enjoyed watching as a kid! These are franchises that have a huge following globally and have opened up many doors for actors like Kevin Bacon. On both movies, I was like a kid in a candy store, getting to work with an amazing international cast, run from monsters (as one does) and do all the crazy things that make making movies the best career in the world!

What has surprised you most about your career so far? At this stage of your career, what do you think you have learned from the roles and projects you have worked on?
GREG: Sometimes I have to pinch myself- being a regular Joe from Africa who only started acting full time 5 years ago and now I’m already over 40 projects in having had the privilege of getting to film all over the world, be a leading man and have gotten to work with some of my favorite actors like Morgan Freeman, James Purefoy, Dylan O Brien, Olga Kurylenko, Rutger Hauer, Barry Pepper and Jackson Rathbone. It’s nothing less than an absolute dream come true for which I am truly grateful. I have learned that nothing is impossible if you stay humble and hustle hard. I’ve learned that you really cannot judge people- we all have a story. There is power in your story even when truth is stranger than fiction.

Then what are the perks of where you are in your career right now?
GREG: Hands down the fact that I get to see the world, get to act full time and get paid to do what I truly love. One of the perks I really love is connecting with fans.

Has there been any great advice you have gotten about working as an actor? What advice would you offer to other upcoming and aspiring actors?
GREG: “We’re students. We’re students the first year, the first 5 years, the first 10 years. . . there’s no guarantee. . . ever. All you can do is just be in there” — Dustin Hoffman. My advice is simple: COMMIT TO A LIFE OF LEARNING THE CRAFT, STAY HUMBLE, HUSTLE HARD.

Do you have any other upcoming projects that you can share that fans should keep an eye out for?
GREG: Fans can catch me as ‘Tony’ in “The Serengeti Rules,” ‘Dutch’ in “Tremors,” Travis in the new “Lake Placid,” ‘Hank’ in “The Recce,” Henry in “Last Ones Out” (Amazon), “Born to Win” (Pureflix), ‘Caleb’ in “Samson” and ‘Cory’ in “Deep End.”