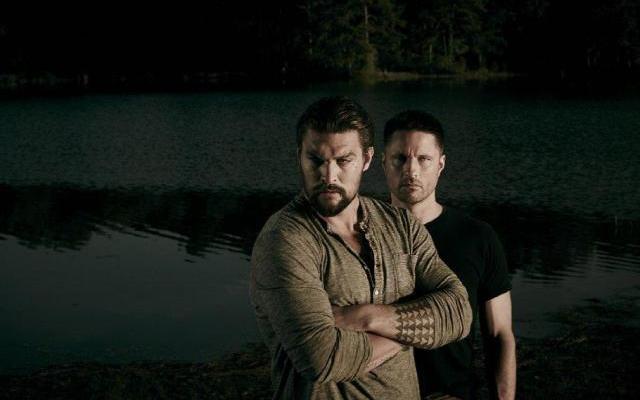 Sundance’s second original drama, THE RED ROAD, premiered last night. It’s set in a New Jersey town near New York City, but the community is quite rural, with a significant Native American population sort of segregated from the whites in territory, though not in story. The first episode, “Arise My Love, Shake Off This Dream,” introduces us to a number of different characters in both of those communities, each with secrets and connections to a number of other different players. Basically, there is a lot going on.

THE RED ROAD does not stop and lay out what the story and characters are, exactly. We’re dropped into the middle of the tale, and it is very hard to sort things out at the start. Because the action jumps around between so many different people, viewers are left trying to puzzle out the chess pieces on a murky board. Which means it’s not very accessible.

The tone is dark, slow, and dramatic, much like a number of other high-level crime shows. Stylistically, THE RED ROAD fits into a group that includes The Killing, Top of the Lake, Rectify, True Detective, Low Winter Sun, and others. This very clearly shows us that Sundance’s brand will be along the lines of the best of HBO and AMC, very good quality indeed.

But this particular series doesn’t quite live up to that. I’m not sure if it’s just me, but I’m not finding the connections I have in those other shows. The actors do a fine enough job, with several really great showcase moments, so I don’t think it’s their fault. I blame the writing for feeling just a bit shallow and flat in an otherwise realized world. Also, the setting doesn’t seem that defined, with audiences left confused how this can be so close to New York and look so very different.

The stand-out actress is Julianna Nicholson (Masters of Sex) as Jean Jensen. Jean is the wife of cop Harold Jensen (Martin Henderson, Off the Map). They’re going through some strife in their marriage as Jean gets sober, not necessarily well handled, as she has mental problems to boot, and the lack of alcohol may be letting them out in a bigger way than before. So we get a number of crazy-Jean scenes that show us just how good Nicholson can be, which is very.

Henderson does a fine job balancing her out, playing the kind, loving husband. When Jean makes mistakes, Harold tries his best to cover them up and protect her. When their teenage daughter, Rachel (Allie Gonino, The Lying Game), runs off with a Native American boy, Junior (Kiowa Gordon, Twilight), Jean takes off with her rage and a gun, but Harold calms those in Jean’s wake and safely finds the girl. His other daughter, Kate (Annalise Basso, Bedtime Stories), feels comfortable coming to Harold because she trusts him. All of this says a lot about the man.

The third main cast member is Jason Momoa (Game of Thrones) as Phillip Kopus. Phillip has a history with Jean, perhaps romantic, definitely tangled up in her brother’s drowning. Now, he’s fresh out of jail, working for a crook who happens to be his father, Jack (Tom Sizemore, Saving Private Ryan), and not exactly patching things up with his mother, Marie (Tamara Tunie, Law & Order: SVU), and kind of being big brother to Junior, in a way. And before the end of “Arise My Love, Shake Off This Dream,” Phillip has Harold right where he wants them.

I hesitate to say there are any obvious good guys or bad guys in THE RED ROAD. Phillip isn’t exactly on the up and up, but there’s also something magnetic about him. Harold, by contrast, is good to his family, but not always on the right side of the law, so there may be consequences for him. Jean is in a terrible place, causing her to do horrible things, but she might be fine if she can get cleaned up and calmed down. So the show lives in a world of grey.

Too bad it’s not a world that sucks you in. The ingredients are present that this should really be a show to watch, but I just don’t quite feel it. I’ll keep tuning in to see if it changes because it’s still better than most broadcast offerings, but it doesn’t seem destined to the critical darling and award winner that its peers have managed to be.

THE RED ROAD airs Thursdays at 9 p.m. ET on Sundance for the next six weeks.