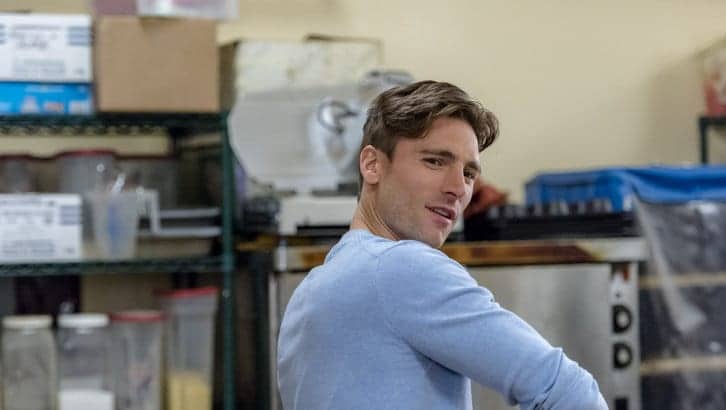 In the latest Hallmark Channel “Spring Fling” film, Andrew Walker reunites on screen with his “A Christmas Dream” co-star Nikki Deloach to bring a heart-warming tale of love and discovery in THE PERFECT CATCH.  No stranger to working in the Hallmark world, Andrew embraces each role with a zest and joy that infuse each of his characters with realism that makes the stories and characters are that more endearing and heartfelt.  In an exclusive interview, Andrew Walker talks about the appeal of this new Hallmark movie and where his career is taking him next.

What initially appealed to you about the role of Chase and working on Hallmark’s THE PERFECT CATCH?
ANDREW:  The fact that he was a pro athlete who is searching to find himself again. I come from a sports background, getting a scholarship to Boston College only to injure myself before my first semester.  I had to reconfigure my future.

How would you describe your character Chase?
ANDREW:  Ultimately a good guy with a lot of pride, who temporarily got blindsided by money and fame.

What did you enjoy about portraying Chase in THE PERFECT CATCH?
ANDREW:  Chase got knocked down and had to find his way back.  I think this is something we all do many times in our lives.  It’s a story we can all relate too, even on the level of pro baseball.

What has been your favorite part about working THE PERFECT CATCH?  Any favorite scenes?
ANDREW:  There were some fun scenes with Chance and Nikki on the baseball field, specifically when Chance is practicing with me. Also, the day I got to pitch to some legit baseball players.

Then what has been the one thing you as an actor haven taken away from working on THE PERFECT CATCH?
ANDREW:  To leave it all on the field 😉

What do you hope viewers take away from watching THE PERFECT CATCH?
ANDREW:  Hope it’s an entertaining story with a nice message.

THE PERFECT CATCH reunites you with Nikki Deloach with whom you also costarred in “A Dream Of Christmas.” How fun was that for the both of you?
ANDREW:  Nikki is the best, she and I have too much fun working together. I feel like I should be paying Hallmark to work with her!

What is the best part of getting to work with an actor with whom you have worked previously?
ANDREW:  We skip the ‘having to find chemistry’ part and dive right into the relationship.

Having done eight prior Hallmark films from “A Bride For Christmas” and “Love On Ice,” what initially made you want to join the Hallmark family?
ANDREW:  With every Hallmark film I work on, I’m consistently reminded of how lucky I am to be working so regularly on the network. Most importantly, I love the stories and the people I get to work with.

What do you think you have learned from working on those films?
ANDREW:  Having the ability to work with many different leading ladies, balancing personalities and helping tell the story.

What are the positive aspects of being part of the growing Hallmark family for you?
ANDREW:  Continued work and wonderful experiences.

At this stage of your career, what do you think you have learned from the amazing variety of roles and projects you have worked on?
ANDREW:  Character versatility.

Are there any cool perks of where you are in your career right now?
ANDREW:  I don’t sweat the roles I don’t get anymore, I realize it’s not personal.

If there were one role you would like to revisit, which would it be and why?
ANDREW:  I would love to revisit my role on ‘”When Calls The Heart.” I loved playing that character and think given more time to prepare, I could’ve developed him a lot more.

Do any of your characters and the situations they find themselves in ever leave a lasting impression on you?
ANDREW:  All of them shift me as an actor / person in one way or another, always in a positive way.

Has there been any great advice you have gotten?
ANDREW:   Always be professional.

What advice would you offer to other upcoming and aspiring actors?
ANDREW:  Stay true to yourself, don’t try to be someone you think they want to see AND create your own content!

What do you consider to be one of your proudest accomplishments as a working actor?
ANDREW:  Producing and acting in a film called “Oxalis,” which will be completed in 2 months.

Do you have any other upcoming projects that you can share that fans should keep an eye out for?
ANDREW:  Indie film called, “Oxalis.”  It’s a sci-fi thriller staring myself, Kelly Pendygraft and Derek Wilson.  Very intense and unique story.  Released later this year.

To see all the fun Andrew and Nikki have as they bring yet another romantic tale of love to our screens, be sure to tune in for the premiere of THE PERFECT CATCH on Saturday, April 22nd at 9:00 p.m. on Hallmark Channel.  Then also be on the look-out for Andrew’s new film “Oxalis” scheduled to be released later in 2017.