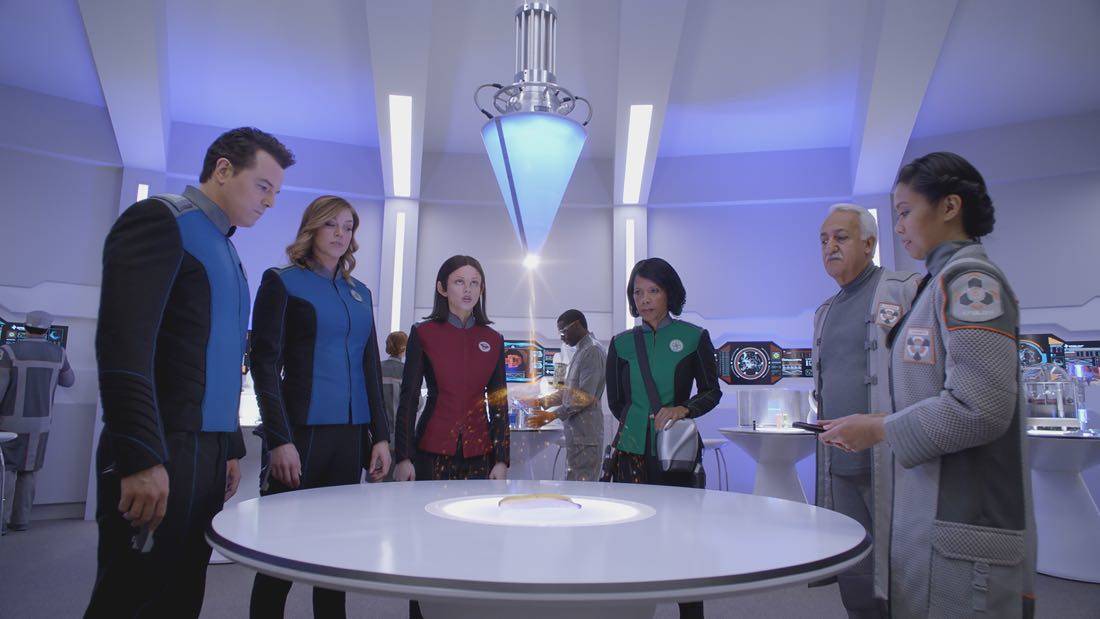 A visit to the Fox lot in Los Angeles during this Summer’s TCA Tour provided a cool peek behind-the-scenes at the new Fox drama series THE ORVILLE.  First, as should be noted since it was such a surprise, THE ORVILLE is a 60-minute loving homage to STAR TREK, not merely a 30-minute comedy series.  So visiting the set was rather a fun surprise as well.

Seth MacFarlane and Fox have spared no expense in creating THE ORVILLE ship, which stands inside its cavernous hanger as a 2-story nearly life-size model in which the show is filmed.  Just walking into it is startling as you realize how much space there is, whether it is strolling down the long corridors or up the spiral, blue-lit staircase up towards the ship bridge where it is surrounded by a 180-degree screen (10,372 pixels wide with 3 times IMAX resolution).  The screen projects detailed views of planets, a monstrous sun, and astroid fields so detailed that you feel like every moving celestial body is on a collision course with the ship. The lighting so bright at times that you could feel the warmth emanating from the massive sun on screen.  All the realism is provided so that the actors have something to react to as they stand on the ship bridge — if they feel it is real, then you should too.  (I will confess, I ducked a few times as the astroids flew by.)  So when standing on the bridge, everything is geared towards the feeling of awe and discovery, not life-threatening situations — and it was certainly awesome to stand there and marvel at the realism of the universe as they have created it. The attention to detail makes you believe that you are there.

As explained, the Starship Orville is an explorer class ship and is not a battle cruiser.  It is not the largest of THE ORVILLE universe, nor the smallest.  Rather it is a modest fleet cruiser, home to approximately 300 souls, which includes both alien life forms and human life forms.  As depicted on the show, the Starship Orville travels at sub-light speed with capability of traveling at quantum speed.  In addition, since the show takes places several hundred years in the future, there have been a number of significant technological advancements, such as food synthesizers allow the ship inhabitants to order whatever they want just by speaking and it creates whatever they want.  Some of the cool props laid out for inspection included: medical scanners, repair tools, weaponry like the double-barrel shotgun plasma device.  What was curious to see was how many of the tools and weapons were actually functional. Some lit up and others had moving parts and gears.  Each, when held, felt like a real device or weapon.  (It is easy to imagine the cast having a field day playing with all the “toys”!)

Also brought out to be admired were numerous costumes designed for the 40+ alien life species that live aboard the Starship Orville — and each dressed more breath-taking than the last.  Costume designer Joseph Porro is a wizard with obtaining one-of-a-kind fabrics straight from the markets of Guangzhou and in Suzhou in China.   Each year he goes there to find the best fabric designs in the world and has those excessively shipped back to the United States for his creations on the shows he works on.  This year, that includes THE ORVILLE.  While the officers and crew aboard Starship Orville are wearing standard uniforms, the vast array of life forms they meet and encounter are dressed magnificently.  Each wears clothing that would honor royalty from any nation or planet.  Astoundingly, Porro and his team of five seamstresses whip up magnificent designs and costumes every episode as the Starship Orville encounters each new alien race and life form.  One crucial constant to THE ORVILLE is the mandate that the show ultimately be about how humanity relates to each other — in fun and congenial ways.  Co-existence is emphasized in a multitude of universes with so many life forms to meet and greet along the way.

In addition to the cool tools and ultra cool costumes were the incredible prosthetics design for the life forms of the aliens, both who work on the ship and those they meet throughout the season.  On such creation is for the gelatinous blob (played by Norm MacDonald).  Then there are others, such as the Moclans (one is played by Peter Macon) who wear full prosthetics with sculpted makeup. Then there is Alara (played by Halston Sage), who wears an appliance forehead comprised of both mechanical makeup and prosthetics.  It is the mandate of the show that everything exists. It must be tangible and all of the characters exist so that if you were to visit, you could touch them and see them.

With the aid of all these masters of craft, THE ORVILLE is brought to life on screen.  It is their united goal to create a 43-minute movie-quality episode every week.  They even employ an orchestra to add the sound layering the scenes as Seth MacFarlane knows the power of music helps create an emotional resonance for the audience to feel what they see.   In the end, this team of 300+ phenomenally talented behind-the-scenes folks, along with the hard-working on-screen talent, devotedly work to make Seth’s vision of THE ORVILLE come alive and delight audiences who discover their show.

You are invited to discover the charming world of THE ORVILLE (starring Seth MacFarlane, Adrianne Palicki, Penny Johnson Jerald, Scott Grimes, Peter Macon, Halston Sage, J Lee, Mark Jackson, and Chad L. Coleman) as it premieres with TWO sneak peeks on Sunday, September 10th and Sunday, September 17th, before the show debuts in its normal timeslot on Thursday nights at 9:00 p.m. on Fox.  It will be sweeter and with an edge of sly humor than you would have expected.