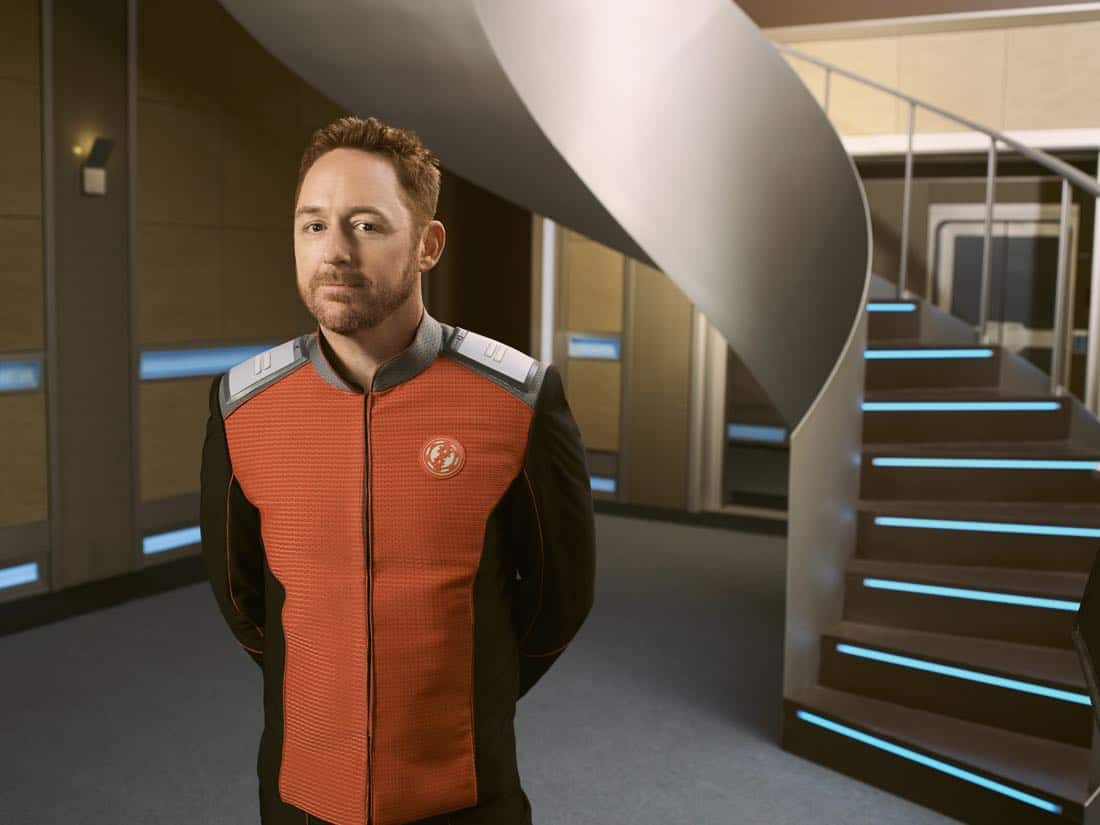 In Fox’s new series THE ORVILLE, the show deftly blends humor and heart within its cheerful homage to the classic science fiction series STAR TREK. The outrageous comedy is populated with characters that invite viewers to laugh with them as they encounter incredible adventures and even more astounding life forms across the universe. Bringing his own down-to-Earth and tongue-in-cheek style of comedic style to the show, Scott Grimes brings the laughs as Lt. Gordon Malloy. In an exclusive interview, Scott reveals how the role of Gordon was literally created for him and some of the best lessons he has learned along the way as he reaches for the stars in how own life.

What initially appealed to you about portraying Gordon Malloy and working on THE ORVILLE?
SCOTT: It’s a cool story that never happens in the business, where my friend Seth MacFarlane at a party mentioned he was writing this show and writing me a part. I said great, laughed and never thought twice about it because those things normally don’t happen. A couple months later at another party he brought it up again, and said he was serious about it and I said of course I wanted to work with him again. He stuck by his friends and wouldn’t do the show unless he could hire the people he wrote the parts for.

How would you describe who Gordon is?
SCOTT: Gordon is your best friend in every way. He’ll make you do things don’t want to do and help do the things you need to do. He’s the perfect right hand man for the party side of life and the serious side. He’s a bit inept, a bit goofy, irresponsible, a practical joker but you can trust him with your life.

What do you most admire most about Gordon?
SCOTT: I admire his red hair! I think it’s a bold statement.

What is it like working with such a talented ensemble as Seth MacFarlane, Adrienne Palicki, Penny Johnson Jerald, Peter Macon, Halston Sage, Chad Coleman, Mark Jackson and J. Lee?
SCOTT: I come from E.R., which I thought would always be the best ensemble cast on television, and to now have this and to see it happening all over again is amazing. We have a group of people who care so much about one project. Seth has put together a team, almost by accident, that all got along immediately. It’s rare to have that. We just have the same vision of making this show and making Seth proud because that’s really all we want to do. It’s all from his brain, he could do a one man show if he wanted to, so to bring his vision to life and make him proud is something we are all pointing towards. It’s the best cast I’ve ever worked with.

Who do you get to work with the most and can you share a favorite scene that you can share from working with him/her?
SCOTT: J. Lee and I have become like the Abbott and Costello of the show. I do most of the stuff with him because he’s my partner on the bridge. We just bounce off of each other almost literally sometimes. We have a good relationship on screen that’s pure friendship, so every scene with him is great. Also Adrienne, she plays the ex-wife of my best friend, played by Seth, and it’s neat to be the best friend that can snarl at her and question her and always look out for Ed. So I love that relationship too.

What has been your favorite part about working on THE ORVILLE as a whole?
SCOTT: Being on the bridge. I grew up loving STAR TREK and “Star Wars” so being in the cockpit of any sci-fi vehicle like The Orville or The Millennium, which is such a practical and realistic set, is my favorite thing. And also usually that’s when the whole cast is together.

As an actor, what has been the one thing you haven taken away from the experience of working on THE ORVILLE so far?
SCOTT: I’ve tackled a lot of personal fears with this show. I have never really wanted to be in prosthetic makeup, and Seth and I spent two and a half hours in makeup to go undercover as aliens. Stunts and wires, anything out in space, is something I never thought I would tackle. I had to ride a horse on the show. It’s the hardest job I ever did, weirdly enough.

If your were to find yourself aboard THE ORVILLE, what would be the hardest part to adapt to? And what would be the most fun?
SCOTT: Sunshine! I’m not great at not seeing the sun, and being in space all the time seems like it would be cold and dark. The most fun would be light speed, going into quantum drive and driving that spaceship – it’s like the ultimate Tesla.

Which of THE ORVILLE characters feels like they have stepped right out of STAR TREK and onto your show?
SCOTT: Bortus and Isaac, but those characters are homages to that. There’s has to be a stoic and militant alien and there’s has to be a robot, and they’re both there to remind people they’re watching something they love. I think it’s comforting.

What part of THE ORVILLE set is your favorite?
SCOTT: The bridge. It’s like a childhood dream, and it is so practical and realistic.

What has been the coolest prop that you have seen made for the show?
SCOTT: Any gun you can set to stun is pretty awesome. All props are designed by Seth and the props team so they’re all brand new things. Also, the food synthesizer on the ship is a real food synthesizer, so I find that to be a great prop!

What do you hope viewers take away from watching THE ORVILLE?
SCOTT: I hope they take away that this show is utopian, not dystopian – it’s a look at a bright future, instead of feeling like the world is declining, it’s like, we’ve figured that out, and we have an optimistic idea of what the future is going to be. It doesn’t all have to be a world that went wrong, it can be a world that went right while still trying to find peace throughout the galaxy.

What has surprised you most about your career so far?
SCOTT: I think realizing how difficult it is to sustain a career in general. In any line of business, but especially as a character actor in show business. I’ve seen so many people quit, and I’m surprised and happy that I have a great family and I’m still working.

At this stage of your career, what do you think you have learned from the roles and projects you have worked on?
SCOTT: Kindness is way better and more powerful as a tool than leading with being a snob or a jerk, I think. If you’re kind to people they will continue wanting to work with you.

Then what are the perks of where you are in your career right now?
SCOTT: Money is a huge perk! It’s nice to be comfortable and know your children are taken care of. It’s also a perk to get to perform and be on stage. Anybody wants to do something and have people enjoy it, and that is a huge perk. I get to meet interesting people around the world, and most people are genuinely kind.

If there were one previous role you would like to revisit, which would it be and why?
SCOTT: It would be E.R. I loved playing Archie Morris. He was a jerk, but also a good doctor, kind of funny and stupid. I’d love to play him again. My favorite movie I ever did was “Mystery Alaska,” I got to play hockey for four months in Alberta. I met a ton of people I’m still best friends with on that movie, so that would be fun to revisit.

Do any of your characters and the situations they find themselves in ever leave a lasting impression on you?
SCOTT: In “Band of Brothers,” I played Donald Malarkey, who just recently passed away. When you play a hero and a nonfictional person, there’s a responsibility to it, and when you pull it off it’s a great feeling. Ultimately, playing this hero, that I am not, and working with him and his family was unforgettable.

Do you find any of you character’s habits manifesting in your own life? Like what?
SCOTT: It would be the opposite, I think my habits are manifesting in Gordon. As an adult, I have flaws and quirks that are funnier to put into Gordon. I’m trying to put my personality into him, but it’s different of course because it was written for me.

Has there been any great advice you have gotten about working as an actor?
SCOTT: It wasn’t so much advice, but I toured with Bob Hope for a long time as a young singer. I was his wake up call – literally my dad and I would knock on his hotel door and wake him up in his nightcap. But whenever he was asked for an autograph, he would hand it to me to sign as well, and I wasn’t anybody at the time. I just took who he was and tried as hard as I could to treat people the way he treated people.

What advice would you offer to other upcoming and aspiring actors?
SCOTT: Don’t give up! That sounds cookie cutter, but this business will try to get you to quit. There are so many actors, but you could be down in the dumps with a penny in your bank account on Monday and then have an audition on Tuesday and book it on Wednesday. So if it’s what you want then don’t give up.

Do you have any other upcoming projects that you can share that fans should keep an eye out for?
SCOTT: My band with Russell Crowe, Alan Doyle and Carl Falk, Indoor Garden Party, has an album out called The Musical, which just went #1 in the UK last week. Just a group of middle aged men trying to be rock stars.

To see more of Scott’s hilarious work as Gordon, tune for all new episodes of THE ORVILLE on Thursday nights at 9:00 p.m. on Fox. Tonight’s episode features a real fun treat as Scott and Seth go undercover wearing some extraordinary prosthetics to blend in during a special reconnaissance mission. To learn more about Scott’s future musical performances and his other endeavors, be sure to follow him on Twitter @ScottGrimes

Video for Indoor Garden Party’s song “From Here Clear To The Ocean”:

Video for Indoor Garden Party’s song “Everything I Touch”: