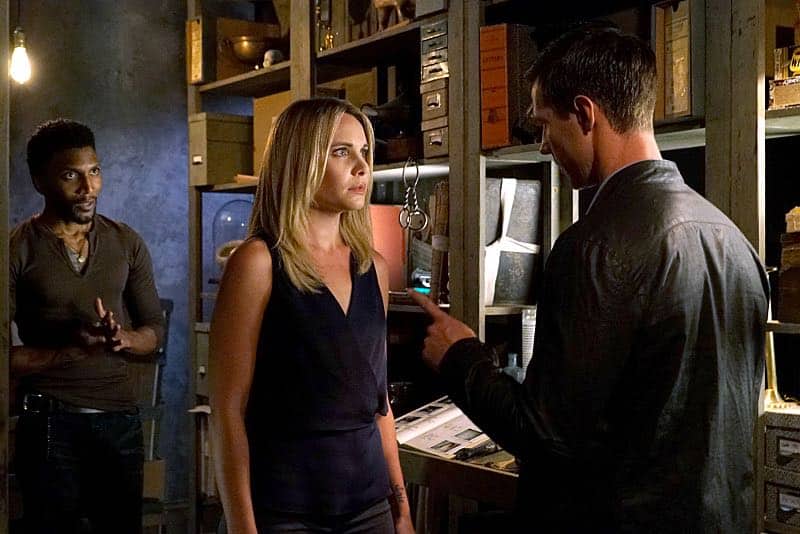 What is perhaps the one thing Klaus Mikaelson (Joseph Morgan) truly fears?  The answer just maybe his ex-girlfriend Aurora de Martel (Rebecca Breeds).  As we have begun to see, Aurora is not exactly mentally stable.  She manipulates men with every smile and every twist of her luscious hair.  Astoundingly, Klaus seems quite vulnerable to her charms despite being burned badly by her in the past and, apparently, one thousand years apart has done little to make him impervious to his first great love.  Just how wicked is Aurora?  Well, she did just kill an entire monastery of monks and has given virtually every person she has ever crossed paths with a reason to fear or hate her.  That should give a sense of how much we should not believe a word out of her pretty mouth, and if there was ever a woman to drive brothers to blows, she is it.  You’ll see.  Klaus and Elijah have a pretty nasty knock-down, drag-out fight about her — literally — especially after Klaus learns about Elijah (Daniel Gillies) and Aurora’s dirty little secret.With that teaser in mind, here are a few more to get you excited and tormented in anticipation for this week’s all new episode of THE ORIGINALS entitled “The Axman’s Letter”:QUOTE:  “Come find me, before I find you.”QUOTE:  “I see him as the monster that he is.”QUOTE:  “However broken you think you are, you are not as broken as me.”QUOTE:  “Naughty little liar.”QUOTE:  “I’ve been dying to get you alone.”QUOTE:  “You have no idea what I’m capable of — but you are about to find out.”QUOTE:  “I am here for you.”QUOTE:  “You want a fight?  So be it.”QUOTE:  “I do not love you.  I thought I did.”QUOTE:  “He does not deserve your love.”QUOTE:  “See.  Who is really on your side?”QUOTE:  “Well, well, well — speak of the devil.”With Klaus’ ex in town and perhaps another earth-shattering reveal that could tear Klaus and Elijah apart forever, you would think there was little time for anyone else to be up to any shenanigans in this week’s episode.  Yet, surprisingly, Cami (Leah Pipes) finds herself in two very sticky situations and it makes you wonder just who will be her knight in shining armor with Klaus so preoccupied. Also trying to work through her leadership issues, Davina (Danielle Campbell) has her hands full with a potential new threat headed her way too.Things are never quiet for more than a second, if even that, in New Orleans with the Mikaelsons back in town and now the heirs-apparently circling like vultures. The Sire War is more than just brewing, it is near tipping point and is about ready to explode.  Unfortunately, with Klaus and Elijah divided, will they be able to deal with the various factions about to challenge them?  It is looking more dubious by the second and as executive producer Michael Narducci foreshadowed that the threat to all of them is mortal.  Someone near and dear to our hearts may not make it and that price will weigh heavy on the survivors.  Then next week’s episode on November 13th has, what Michael Narducci described as, the most “chilling and romantic” scene in the history of the show.  Makes you feel like a ghost has walked over your grave just thinking about it.  Just who is in peril or what is going to happen and how many tears will we shed upon finding out?Look for the clues in this week’s episode of THE ORIGINALS on Thursday, November 5th at 9:00 p.m. on the CW and be prepared for next week’s chilling surprise.