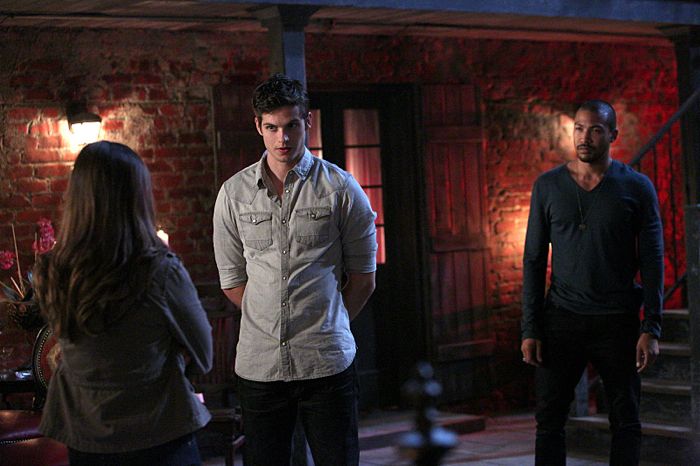 THE ORIGINALS Season 2 Episode 8 Photos The Brothers That Care Forgot : GUEST STAR CLAIRE HOLT RETURNS AS REBEKAH MIKAELSON — Rebekah (guest star Claire Holt), who has spent months away living a normal life with baby Hope, finds herself on the run when she realizes Esther (guest star Sonja Sohn) has uncovered her whereabouts. Convinced that Vincent (guest star Yusuf Gatewood) and Kaleb (guest star Daniel Sharman) would be powerful allies in his fight to take down Esther, Klaus (Joseph Morgan) sets a plan in motion to turn his brothers against their mother. Meanwhile, Hayley (Phoebe Tonkin) is conflicted when she and Jackson (guest star Nathan Parsons) stumble upon an ancient ritual that would get their werewolf packs out from under Esther’s control, but would require her to make a tremendous sacrifice. Elsewhere, Rebekah is concerned when she notices something is off with Elijah (Daniel Gillies). Finally, Davina (Danielle Campbell) takes matters into her own hands by turning to dark magic, and Cami (Leah Pipes) finds herself at the center of Esther’s dangerous plan. Charles Michael Davis also stars. Michael Allowitz directed the episode written by Charlie Charbonneau & Michelle Paradise (#208). Original airdate 11/24/2014.