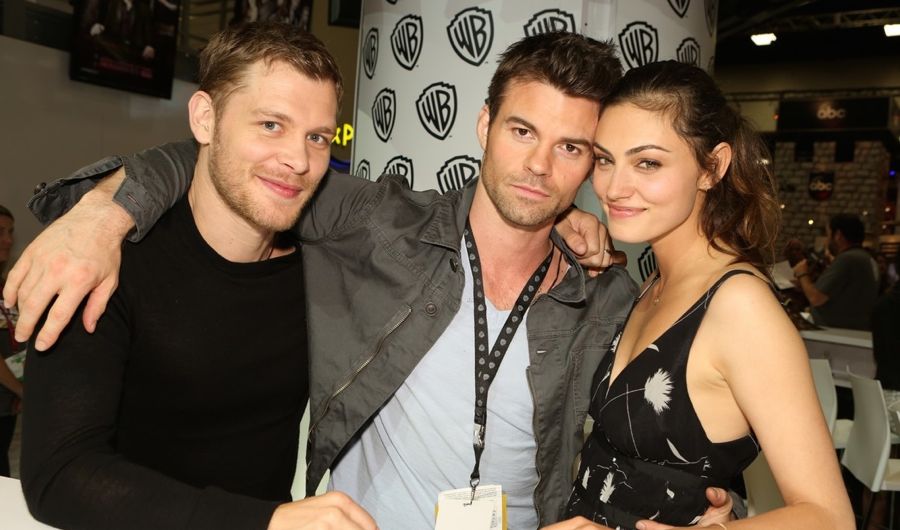 Klaus Mikaelson (Joseph Morgan) is both the hero and villain in his own story.  He inspires great love and devotion from those who come into his life – both friends and family – but he also finds ways to push them away in his eternal (internal) war of grief and anger.  Klaus forever mourns the loss of his mother and both his fathers (his biological father and his namesake father), a few which have died at his own hand, as well as the family members who have betrayed him or did not have his back when he needed it most.  Klaus recently found out that his most trusted confidante and the brother who has stood steadfastly by him for over a thousand years is also the one who perhaps betrayed him the most – and it cost Klaus his first and possibly his greatest love Aurora (Rebecca Breeds).

In an interview from the set, Joseph Morgan talks the reveal of Elijah (Daniel Gillies) greatest betrayal of his brother Klaus:  “He’s done something utterly unforgiveable, as we found out, and it’s created this rift between them – again, but perhaps bigger than ever.  So I would say Klaus is looking for new allies.  He’s searching around to see who he can trust.  And as we know, there is someone from his past – an intimate from his past – who he feels now bonded.  This betrayal has kind of bonded them as well because they were both led to believe a lie a thousand years ago.”

Fortunately for Klaus, he has loved and does love quite a few incredible women in his life.  Beside his first love Aurora, there is also Cami (Leah Pipes) who he has not yet dared embark about a romantic relationship out of fear for her as he seems to constantly at war to protect his family, his daughter Hope, and now his own survival as supernatural threats strike without ending and amassing a blood-thirsty death toll to those in his vicinity.

Talking about the Klaus/Cami friendship and the fact that Aurora is now in the picture, Joseph shared:  “It will be interesting to see that play out.  It definitely does effect it and both characters become aware of each other – although not quite yet – but I would say that initially it is going to hinder it because, as we know, there is some kind of – well, certainly a possessiveness over Cami and a feeling of wanting to protect her — whatever else you can say about his relationship with her. So having a possessive ex-girlfriend come into town is going to make things difficult.  Like, ‘You’re spending all this time alone with who? And for what purpose?’ So it definitely puts strain on that relationship.”

Plus, when Klaus finds out that Cami was not only arrested, but that she was then abducted and threatened by Lucien (Andrew Leeds), Joseph laughing revealed that Klaus will:  “He’s going to deal with that.  I mean, anything where she’s – I think he feels like she’s consistently getting herself in too deep and it’s a struggle for him because he wants to keep her around, but he’s like a hurricane.  So anything kind of around him or in his path gets thrown up in the air and gets into all sorts of trouble.  So by wanting her to be close to him, he is also putting her in danger. [Laughs]  If he was truly selfless, he would let her go.  But he won’t.  He’s possessive.”

But for now, there is the reappearance of Aurora that Klaus must contend with and all the unresolved feelings that have reawaked within in.  Joseph revealed that for Klaus:  “With Aurora, he will revert back to that innocence.  But I don’t know, she doesn’t seem as innocent in present day as she was back then.  I wouldn’t hold onto too much hope.  Maybe, at least at first, I think he does truly want to explore that side of himself and that relationship that they both lost.  I think there is an emotional exploration to be done there, which he may allow himself to feel quite vulnerable in doing.  But he also has his strategic head on and he’s thinking, ‘Hey, wait a minute, what does this person have to gain from all of this?  Why is she back after so long?’  She was compelled, but she realized their betrayal a long time ago.  So where has she been?  There’s still a good 800 years where she could have come back. So he is very much also trying to keep a bit of distance and be objective in figuring out what is going on with her.”

As for Klaus’ baby-mama Hayley (Phoebe Tonkin) and that fractured and contentious relationship, Joseph revealed: “They are at odds a lot through the series, which is always interesting to play. . . But there is definitely more interaction with Hayley and not all negative.  She sometimes has a way of cutting through all of Klaus’ bullshit and telling him how it is, and she does do that in an upcoming episode.”

With his family and friend relationships a bit strained, it leaves one wondering who Klaus can turn to and rely on.  Joseph revealed: “He is investigating the possibility of Aurora being an ally.  So he is really sussing that out.  He doesn’t trust Lucien, though we know he likes him, and doesn’t care for Tristan (Oliver Ackland) at all. . . I think he is wary of Marcel (Charles Michael Davis). . . [Klaus] told him, ‘If they come for me, they’ll come through you.’ So I think Klaus still feels very protective of Marcel. But I also think he wants to keep him at a distance.  There has been a lot of betrayal there. I’m not sure he is ready to welcome Marcel back into the fold.”

The good news is that Klaus knows that his best way to protect himself and those he loves is keep both friends and foes close.  Joseph even noted that for Klaus and Elijah: “We have a common enemy at the moment – we have the prophecy that the Mikaelsons will fall and the first of their sire lines have swarmed into town.  So I think we have to stand united, but I would say begrudgingly united, and it still feels like there is some unresolved turmoil between them. I don’t think everything has just gone back to normal.  That still exists, but has to be put to one side at the moment.”

As to the Thanksgiving episode, Joseph laughingly said:  “Of course there’s drama.  It’s not just everyone holding hands and saying, ‘I’m thankful for the fact Elijah betrayed me.’  There’s a lot of drama. We got into it with a plan and they do as well and not everybody can get what they want.  It makes for an interesting episode.”

To see what else lies in store for those wily and cursed Mikaelsons, be sure to check out our video interviews with the cast from the set of THE ORIGINALS:
http://seat42f.com/the-originals-scoop-straight-from-the-set-interviews-with-joseph-morgan-daniel-gillies-and-phoebe-tonkin.html

All new episodes of THE ORIGINALS air Thursday nights at 9:00 p.m. on the CW.