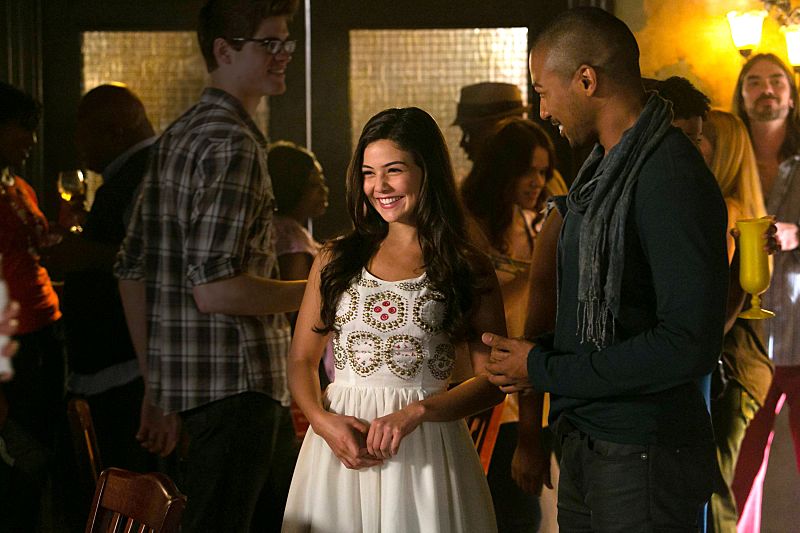 Now that Klaus Mikaelson (Joseph Morgan) has freed himself from the betrayal and daggering by his own siblings, life as everyone knows it in New Orleans is about to get a lot more dangerous in THE ORIGINALS.  As Season 2 comes to a close, there are only two things certain:  Klaus will protect his daughter from any threat and his quest for vengeance over the betrayal by those closest to him will remains unquenched.  What does that mean?  Everyone should get out of his way and pray he does not find them.  Angry, Klaus is dangerous; but now that Klaus’ wrath is about to be unleashed, anyone unfortunate enough to cross his path may not escape alive.  The innocent will suffer and the responsible parties are marked for death.

So what does that mean for Davina Claire (Danielle Campell) and Marcel Gerard (Charles Michael Davis)? Nothing good.  They may not have conspired with Klaus’ siblings Rebekah (Maisie Richardson-Sellers), Elijah (Daniel Gillies) and Freya (Riley Voelkel) to put that dagger in his back, but they have also not honored the one thing Klaus demands above everything: loyalty.  Marcel being the on-again/off-again paramour of Rebekah and Davina, being one of the most powerful witches in New Orleans, Klaus will surely seek them out to determine if they are aligned with his traitorous siblings or if they will stand by him in as he retrieves and strives to protect his daughter Hope.

In an exclusive interview, stars Danielle Campbell and Charles Michael Davis talked about what lies ahead for Davina and Marcel as the clock ticks down in the finale two episodes of Season 2:

Contemplating who may be the biggest threat right now, Danielle and Charles said that Dahlia (Claudia Black) remains the primary villain to be feared — though Klaus’ wrath is not something to be taken lightly either.  In fact, they both laughingly admitted that Davina and Marcel should be headed out of town with Josh (Steven Krueger) if they knew what was good for them.  They also said that would make a wonderful spinoff:  the adventures of Davina, Marcel and Josh — if the show were ever to consider it.

However, before either Marcel or Davina can get out of town, Davina is moving forward with her plans to resurrect Klaus’ brother Kol (Daniel Sharman).  It is first and foremost on her mind and nothing is going to sway Davina from bringing back the man she loves — even if there could be a dire cost in the process.

Charles laughingly said he was unaware the Marcel could be marked as prey, but he did admit that perhaps a few prayers could be used to make sure Marcel survives the dangers ahead in the next two episodes.

Danielle also shared that the Season 2 finale will create quite a bit of upheaval for everyone and that Season 3 will be completely different for the characters.  She also mentioned that there are a few new characters being introduced that shall set up the storyline for Season 3 that fans should be on the lookout for.

As for Baby Hope, while Klaus and Hayley (Phoebe Tonkin) have not exactly been seeing eye-to-eye on how to best protect their daughter, it does not necessarily mean that Hayley will die at Klaus’ hands in the finale.  That being said, no one is safe.  The Season 2 finale may yet claim the life of another character everyone holds dear in their hearts.

Personally, both Danielle and Charles are rooting for that death to be Dahlia’s death, but who knows if that prayer will be answered this season.

The other wild card still in play is sister Freya.  Just what is she up to and will she be the savior or betrayer of them all?

Turning to the romance side of things, both Danielle and Charles are rooting for a return of the romance to THE ORIGINALS but fear that bigger events will take priority in the last two episodes of the season.  Charles was a bit torn considering which of the lovely ladies still lays claim to Marcel’s heart, but he loves that Marcel has wonderful women in his life.  As for Davina, Danielle firmly believes that Davina’s heart belongs to Kol.

As to what will happen in the Season 2 finale, both Danielle and Charles said fans should be praying for the survival of the favorite characters.  Big events, big death and big changes are coming to THE ORIGINALS.

Be sure to tune in for the penultimate episode of THE ORIGINALS Season 2 on Monday, May 4th and the Season 2 finale on May 11th to see just who survives and what big surprises are coming for the Mikaelsons, Marcel, Davina and Hayley.  And don’t forget to pray!